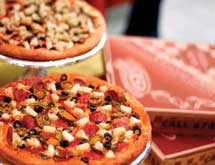 It would be difficult to find an entrepreneur with a better sense of Caribbean consumers’ fast-food demands than Mario Sabga-Aboud. The chairman of Pizza Boys Group of Companies can be described as a master in the industry on all aspects of cuisine from burgers and donuts to Chinese and coffee houses. He has made his fortune by bringing the next big fast-food fads to Trinidad and wherever else the demand can be found throughout the rest of the Caribbean.

“I would never forget how, when we opened Pizza Boys in 1988, we hired a specialist chef to help create the ultimate pizza for us – a recipe we still use today – but one day he came running angrily into the office, ‘What are they doing?’ he yelled,” Sabga-Aboud recalls. “I asked him what he meant. ‘They are putting ketchup on my pizza!’ he screamed. It is these unique tastes that we strive to cater to and serve every single day.”

No matter what the cuisine or in which category the restaurant delivers, Sabga-Aboud says the growth of his businesses depends on providing superior customer service. No matter what his next venture may be, he says it should thrive because he adheres to this ethos vehemently.

“We provide great customer service and incredible ambiance and atmosphere,” Sabga-Aboud says. “It’s all about the service, which is key in any food industry you have. We continue to listen to what their need and wants are.”

A true coffee connoisseur, he has taken his 10-cup-per-day habit and turned it into a ritual for the rest of the Caribbean. This has been his crowning moment in his life, which has opened doors to him as a franchiser.

He was inspired from his own experience when he travelled to Miami. When he needed to relax and get himself back in focus, he found himself gravitating towards the nearest Starbucks.

“There was a certain kind of feeling when you walked around with a cup of Starbucks in your hand,” Sabga-Aboud says. “I wanted to create that feeling in Trinidad and Tobago.

“I studied everything there is to know about coffee. I went to the United States and got certified in becoming a barista. I did the course four times just to understand what was the essence of making a good cup of coffee.”

Ready to Roll Out
Now that he was prepared to introduce his idea to the world he was faced with a stumbling block the name. “Coffee Boys just didn’t sound right,” he says.

One question from his wife Vanessa led to an answer. “‘What does coffee mean to you?’” she asked me,” he recalls. “I said to her, ‘It is my “ritual.” Every day I get up I have to have it.” And the name “Rituals” was born.

First Location
This coffee-guru opened his first Rituals Coffee House in Maraval, which caused a chain reaction in him to open another at the Piarco International Airport based on the amazing response from patrons. The growing menu provided something for everyone who walked in the door from hot and cold coffees and teas and smoothies to gourmet sandwiches, wraps, pastries and deserts.

Rituals’ rapid growth and tremendous success in Trinidad and Tobago surprised the company’s California-based suppliers. A representative of the supplier came to the country and was so impressed by what he saw that Mario is now their exclusive supplier throughout the Caribbean.

“I wanted to be everywhere right away in Trinidad and Tobago,” Sabga-Aboud says.

“Rituals became a household name in Trinidad and that is when it struck me,” he adds. “I’ve created something called ‘the third place’ – there’s work, home and Rituals. People come to begin their day, relax, have coffee and breakfast and settle themselves before they go to work. It’s a place that breaks up the rush of everyday life from one place to another. We are proud to say that we serve over 50,000 persons a day throughout the Caribbean.”

Regional Growth
Sabga-Aboud’s primary goal is to be in every Caribbean island before the year 2016. His dream, which began as a ripple, has turned into an ocean of activity as discussions are under way with India, Nigeria, Guatemala, Honduras and El Salvador to open Rituals Coffee Houses.

“We in the Caribbean are all one family,” Sabga-Aboud says.

“When I travel to the different islands the people are so warm and welcoming of the Rituals brand, they are really proud that this is the coffee of the Caribbean.”