Back to Profile Gallery > PizzaRev 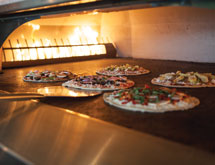 People like to be given a wide range of choices with their meals. But the restaurants of PizzaRev exceed customers’ expectations by offering more than 30 different pizza toppings for one affordable all-in price, Partner and co-CEO Irv Zuckerman says.

“The simple truth is that pizza is such an individual item,” he says. “We find that when people are given more variety in topping options, they get more creative with their choices. In fact, in many cases, they try toppings for the first time, and the results have been great.”
Based in Los Angeles, PizzaRev operates two restaurants that serve 11-inch “craft your own” pizzas and salads. Zuckerman cofounded the company with Partner and co-CEO Rodney Eckerman, along with their sons, Jeffrey Zuckerman and Nicholas Eckerman, in 2011.

Previously, Irv Zuckerman and Rodney Eckerman worked in the entertainment industry as CEOs at Clear Channel Music, the largest live concert event producer in North America. Eventually, the entertainment division became Live Nation. By the time they crossed over into foods, both men had completed extensive research and development, which proved to be beneficial before opening PizzaRev’s first location in Northridge, Calif.

Today, the company has a second location in Studio City, Calif., with a third restaurant in Woodland Hills, Calif., due to open in mid-November and plans to open more, Zuckerman says. At each location, he notes, PizzaRev serves Roman-style thin and crispy pizzas that are completed in the restaurants’ state-of-the-art, open-flame stone bed ovens.

The dough is made fresh daily and pressed in front of the customers, who are allowed to choose as many toppings as they like when they order. Zuckerman adds that each of its locations sells several hundred pizzas per day and has had lines out the doors when they serve 500 to 600.

“We offer a fresh, quality product that the public is appreciating,” he says. “You’re not going to find many places that do that kind of volume.”

Its cooking method is superior, as well. “Many in the space have inferior cooking equipment, such as roller grill ovens or ovens that can’t heat to a Woodstone oven’s temperature, causing longer cooking times and lesser, inferior results,” he says. “At each juncture, PizzaRev has invested in the highest-quality ingredients and equipment, noting that in the end, the sheer volume of sales will offset the increased expense, and excellence will prevail.”

Additionally, “We just really believe that the restaurant experience can be more fun,” he says. “So what we’ve done is we’ve put forth an opportunity for people to come in and basically design their own lunch or dinner around pizza. We’ve found it is extraordinarily successful by giving people the ability to create.”

Catering to Customers
Zuckerman has worked throughout his career in customer-facing ventures, including his own Contemporary Productions, an event production and promotion firm in St. Louis. In 1998, he sold his business to SFX, which was purchased by Clear Channel Communications the following year.

After the merger, Zuckerman became the co-CEO of Clear Channel Music along with his partner in PizzaRev, Rodney Eckerman. Zuckerman and Eckerman say that their background in entertainment prepared them well for the food industry. Producing events for superstar artists who expect special treatment and great backstage food and ambiance makes the challenge of delivering a great experience for their PizzaRev customers seem easy by comparison.

“We are catering to our customers the same way we cater to an artist,” Zuckerman declares. “We wanted to give an artist everything they desired so that they wanted to come back, and the same holds true for our customers.”

To encourage customers to return for more, PizzaRev strives to engage them through its servers, who are known as Pizzaiolos. “They really interact with the people who are on the other side of the glass,” he says.

For example, if a customer orders a pizza with pepperoni, the Pizzaiolo will point out the options of regular, spicy or beef pepperoni.“We really believe the person behind the counter has a duty to let them know some of the options and distinctions that they may not be aware of,” Zuckerman says. “That’s what we basically try to impart to our people: If you’ve got something you know is a winner and they’re in the ball park, tell them about it.

“At the end of the day, it’s the customer’s choice, but let them see our variety and points of difference,” he says. “Our goal is the complete satisfaction of our customers because that will bring them back.”

In fact, the company is so confident in its product, it has a “Free Pizza Day” each time it opens a location. It brings people in sooner and the word spreads more quickly.

L.A. Story
PizzaRev opened the Northridge store in April and Studio City in September with plans to open Woodland Hills in November plus two more in the first quarter of 2013. Zuckerman says the company has increased its month-over-month business dramatically since opening. “It’s pretty humbling,” he states.

PizzaRev’s primary plan is to grow outward from Southern California. “We believe the L.A. story of growing a restaurant with our unique process is a big opportunity and the message will spread outside of SoCal,” he says.

“L.A. is a big market, where there is a great amount of creativity in all fields including many people trying a variety of different restaurant concepts,” he says. “There are so many restaurants here and the failure rate is very high. We are pleased that our model is thriving and it inspires us to move forward more quickly.”

A challenge for PizzaRev is finding strong locations, Zuckerman admits. “Great locations are a springboard for us to ramp up,” he says. “We look for ‘energy’ centers and other fast-casual restaurant magnets along with lifestyle centers that cater to people who enjoy eating out and appreciate a casual environment to enjoy themselves.”

To assist the company in finding locations, it has entered into an exclusive relationship with Cypress Retail Group, a real estate firm based in Los Angeles. “They’re great,” Zuckerman raves, noting that the company helped locate and secure several locations for Chipotle Mexican Grill. “With their help we were able to complete not only the locations we’ve opened, but narrow down those that we were looking at, as well as in contract.”

Changing the Paradigm
Although there are 65,000 pizza restaurants in the United States, PizzaRev believes it can establish and capture brand awareness and presence in the fast-casual segment. In addition, he says, its oven’s rapid cooking process (where pizza is served in about three minutes) allows it to take advantage of the lunchtime segment, which is usually dominated by sandwiches.

“Historically, pizzas made to order were usually accompanied by long waits with waiter service and slow cooking ovens,” he says. “On the other side of the spectrum are the options for lunch that have included the heat lamp slice of pizza.

“Both of these results have made pizza for lunch a difficult challenge,” he states. “Now, PizzaRev is able to serve a fresh, quality individualized product in just a few minutes, so that those who don’t have long lunch breaks or those who want a real whole pizza can do so in a timely fashion in a fun environment.

“Further, they don’t have to share a pizza and not get exactly what they want on their pizza,” he continues. “From start to finish, our customers are in charge of their lunch or dinner.

“They create their pie, watch it go into the oven, and enjoy it almost immediately,” Zuckerman explains. “The result is a piping hot, thin and crispy Roman-style pizza made to order. We are changing the paradigm for pizza at lunch.”

Pizza Praise
The company opened its first location near California State University-Northridge and chose that location because of its fast-paced environment. Although the company considered it a “test kitchen,” it had a detailed plan in place and spent months finalizing the restaurant design, list of ingredients, vendors and suppliers, hiring practices and décor, Zuckerman says. “The result has been immediate and positive responses from the industry and more importantly, customers,” he states.

Consumer reviews on the website Yelp have ranked PizzaRev as “one of the highest-rated in all of Los Angeles,” Zuckerman says. “This response has intensified and accelerated our plans to open stores in Southern California.

“Our vision is to grow this business into something that makes us very proud long-term and makes a difference in the way pizza is served,” he says. The firm continuously refines and enhances its model.

The Zuckermans and Eckermans have adopted a U.S. Army slogan, “Perfection is our standard, not our goal,” as a motivator for PizzaRev. “Although this is a lofty statement, it is one we aspire to deliver on,” Zuckerman says.