Back to Profile Gallery > Plumrose USA 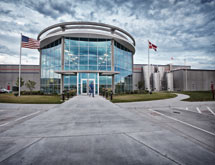 After more than 75 years, it would be easy for Plumrose USA to take a break from advancing its operations. But the premium meats company has no intention of letting its quality lapse, CEO David Schanzer says.

“We are the leading producer of private-branded sliced lunch meats in the country,” he says. “We value our customers’ brands as much as we value our own. You won’t find that [commitment] anywhere else.”

“Danish Crown is a cooperative of over 10,000 pig farmers,” Schanzer says, noting that Plumrose has changed hands of ownership throughout its history. “We’ve been in this [incarnation] for the past 18 years.”

Plumrose’s clients include prominent retailers such as Walmart, Kroger and Safeway. “For the most part, [we provide] private-label and branded products,” he says, noting that 90 percent of the company’s business is for the retail market.

Plumrose conceived the idea of the facility three years ago and started construction in December 2012. “We were literally up and running in less than a year,” Schanzer says, noting that ONEsource Facility Solutions helped with the design and production of the facility. “It’s one of the fastest and most efficient start-ups anyone has ever seen.”

But this did not mean the facility was perfect. “We’re making improvements every week,” Schanzer admits. “It’s coming along very well.” Some of the improvements have included training for the use of new technology and equipment, and improved scheduling.

Plumrose had needed the new facility for a very long time, he adds. “We were working seven days a week in our other facilities,” Schanzer recalls, noting that Plumrose has four other manufacturing facilities. “It was the right thing to do to keep [our] growth going.”

Plumrose’s new building significantly removes “the human element” from much of its operations, Schanzer says. “It’s a very automated facility,” he says, noting that this was done for worker safety and improved performance.

It features auto peelers, loaders, slicers and robotics “that put the products into the packages,” he says. “It’s not touched by human hands until the consumer takes it out of the package.”

The facility is also LEED certified, with efficiency devices that allow it to use 50 percent less water and 40 percent less electricity than Plumrose’s other locations. Additionally, “The discharge out of the facility is miniscule versus any other facility of this size,” he says.

Delivering Quality
Plumrose’s success is largely due to its quality products, which are produced with “old world” recipes and leading-edge technology. Its parent’s methods include curing Plumrose’s hams for 48 hours, versus competitors which typically cure for 10 to 15 hours. “Slow curing improves the appearance and taste of the sliced ham,” Schanzer says.

On each of its packages, Plumrose includes an 800-number for customers to call and make comments. Usually, “We get more compliments than complaints,” he says.

Schanzer also praises the work of its supplier, Friesen’s Inc., which serves the food processing, packaging and manufacturing industries. “They make excellent equipment and provide very good customer service,” he says. “[Friesen’s is] one of the top vendors we deal with.”

Plumrose has enjoyed organic growth recently. “That will continue to occur,” he says, noting that it is also looking at acquiring other firms, if they fit well. However, “Organic growth is most likely our best avenue for success,” he says, explaining that it involves investing in people and in the best equipment to deliver the best products. “That’s critical for us to be successful.”