Back to Profile Gallery > Popkoff’s 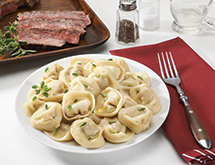 Founded in 1965, food manufacturer Popkoff’s had an inkling that its authentic old-world Russian recipes would be well-received outside of its traditional customer base. Its current owner and CEO Alex Meseonznik purchased the company three years ago for this very purpose. Although Popkoff’s Pelmeni (savory pasta shells) and Vareniki (stuffed pierogies) are made in the United States, its consumer base consists of Eastern Europeans already familiar with the traditional fare.

A mere hunch, however, wasn’t enough to take the risk and move into wider channels. The company needed facts about what consumers were looking for, and for that it went straight to the source: the buyers.

“We started off with surveys and the requirements were: that you had to be in a household of more than one person, had purchased frozen food in the last six months and are the primary shopper who chooses which brands to purchase,” explains Jake White, vice president of marketing and communications. “We sampled 540 people, 61 percent female and nearly every state was represented along with a wide range of annual household incomes.”

Through those surveys, Popkoff’s found out what mattered most to consumers when grocery shopping. The top factors in choosing a particular product were that it had to be flavorful, healthy, priced reasonably, easy to prepare, hearty and natural – and in that order. It also knew it had some teaching to do because many outside of its traditional market were unfamiliar with the product. Once consumers received an explanation of the Pelmeni and Vareniki varieties, however, 80 percent reported they were interested or very interested in purchasing the product. White credits the interest to the adventurous and inquisitive taste buds developing across American cities.

“Three years ago when Alex purchased the company, he came in with a new mission. The company was always doing well, but he had a vision of taking it nationally,” White explains “These were historically peasant foods served in Siberia. But people today are innovative, and they want to try new ethnic flavors and different foods.”

The changing food mentality in the United States has created a prime market for Popkoff’s to launch itself into. But as the brand began preparing itself for the national stage, it knew it would have to reformulate and test its products to fit with those consumer wants. The product already had the attributes of being flavorful, priced reasonably and easy to prepare so Popkoff’s decided to tackle the healthy and all-natural factors in its recipe reformulation.

Natural Changes
“Our target is the health-conscious consumer that wants to serve their family healthy, good food,” White explains. “So we asked ourselves, ‘Can we change all the ingredients – from the flour to what type of chicken is used to what type of beef is used – to make our product 100 percent all-natural?’”

The answer was yes. After four months of research and negotiations, the company decided on a set list of vendors offering all-natural ingredients. It chose King Arthur Flour, which produces non-GMO flour that has never been bleached or bromated. Popkoff’s now sources its chicken from Mary’s Free Range Chicken produced by the family owned Pitman Farms. The air-chilled chickens are raised on an antibiotic-free and vegetarian diet in a stress-free environment where they are allowed to roam. The company also works with Meyer Natural Angus Beef, which raises antibiotic- and steroid-free cattle that are fed strict vegetarian diets to produce beef with exceptional juiciness, tenderness and flavor – and not the artificial kind.

For its veal, Popkoff’s chose Marcho Farms Veal based in Harleysville, Pa., which is the largest USDA-certified veal producer in the United States, and its livestock is free of GMOs, growth hormones and artificial ingredients. Rounding out its all-natural dream team is Good Nature All-Natural Pork, which supplies the company with 100 percent socially raised, minimally processed and air-chilled pork minus artificial ingredients, antibiotics or steroids.

The new recipe using all-natural ingredients made its debut at the National Restaurant Association Show in Chicago in May and appeared at New York’s Fancy Food Show in June. At both shows, celebrity chef Penny Davidi of the Food Network cooked up a variety of recipes using Popkoff’s Pelmeni and Vareniki. The reformulated product is now available in specialty stores in California and comes in new packaging and messaging consistent with Popkoff’s rebranding as an all-natural and authentically ethnic product.

Popkoff’s teamed with GoGreen, a company that reduces the environmental impact of packaging by using green materials that minimize product waste and shrink. The company’s eco-friendly production strategy has minimized its environmental footprint by decreasing waste by 40 percent, using 30 percent less energy and producing 20 percent fewer emissions. White says the new recipe and packaging have received positive responses in retail and at tradeshows.

“They really do taste better, which is good because we were all kind of concerned,” White says. “Sometimes when you turn up the notch on using all-natural ingredients you wonder if it will be good. But when you use those top-of-the-line ingredients, you can taste the difference. So it was a great move. Not only did it improve the product’s taste, but the fact is that it’s healthier than other competitors on the market.”

Expanding the Audience
Now that the product is ready for the national stage, Popkoff’s is working on increasing its production capacity. The company has been manufacturing in a small San Francisco facility, but is building a new 40,000-square-foot state-of-the-art facility in Los Angeles County’s City of Industry.

“The facility will open this October and it’s five times bigger than where we are now,” White says. “It will give us the production capabilities necessary to match the demand as we take the product nationally.”

The facility will also provide the company with new profit avenues. With the larger capacity, Popkoff’s is considering expanding its product line to include traditional Russian favorites such as blintzes. It’s also open to private-label manufacturing. With new possibilities on the horizon, it seems that the vision Meseonznik’s laid out for Popkoff’s three years ago is coming true.

“I am thrilled with the response we have received so far,” Meseonznik says. “We created our products based on recipes from Eastern Europe with an emphasis on quality ingredients and exceptional craftsmanship. Our reformulated, 100 percent all-natural line has resonated well among buyers and created a lot of interest.”

The Popkoff’s team is currently building its national distribution and retail base. Learn more about the launch at www.popkoffs.com.