Back to Profile Gallery > Port Brewing and Lost Abbey

In the burgeoning craft beer segment, it is better to create trends than follow them, says Tomme Arthur, director of brewery operations and co-founder of Port Brewing and The Lost Abbey. “We’ve done a really good job of what we call being ahead of the curve,” Arthur declares. “We never look at the trend. We’re always evolving. One of the goals of the company for us is to not be concerned about what others are doing, but concentrate on what we are doing. If we focus our energy on what we can do, we should be OK. My point is that we don’t tend to react to trends or look to be a part of them.”

Port Brewing and Lost Abbey does not reason backwards by trying to find out what style of beer people want to drink and then brewing a product that matches consumers’ tastes. Rather, the brewery has proceeded confidently to brew what it likes and assume that drinkers will follow its lead.

That is pretty much proving to be the case with the company’s two brands of beer: Port Brewing creates an aggressive, California style reminiscent of “imperial” beers – such as imperial red or India pale ales – whereas Lost Abbey updates the traditions of monastic brewing.

“The Port Brewing brands have a West Coast slant to them – bigger, more alcoholic, with higher hopping rates, imperialized beers,” Arthur explains. “On the Abbey side, we took a continental approach and started with beers of Belgium, France, Germany and England. A lot comes from European roots with our spin on them.”

In addition to all the varieties of beers each brand produces, the brewery also barrel-ages some of its varieties and produces sour beers, which is a specialty niche. “Hardly anyone is doing the sour beer, and a lot of breweries are looking at the two-brand model and thinking it is an interesting way to go about achieving different price points and synergies,” Arthur says. “It’s also a lot of work. While we have a lot of really cool ideas, it takes an enormous amount of energy to brand all the beers.”

Selling All They Can Brew

Despite producing 15,000 to 20,000 barrels a year – nearly half of which is bottled – in its 40,000-square-foot brewery in San Marcos, Calif., Arthur maintains that Port Brewing and Lost Abbey operate at a slower pace than other breweries. “We’re not looking at new markets,” he says. “We’ve grown during the last three years at 20 percent per year. We’re not trying to maximize our opportunities now – we’ll reserve those for later in life.”

Port Brewing and Lost Abbey beers are available in 10 states from the West to Illinois, Georgia, Massachusetts and Pennsylvania. “All of it has to do with places where a great craft beer was available or a great distributor we wanted to work with,” Arthur explains. “We haven’t launched a 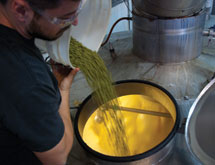 new territory in almost two years because we ran out of capacity to do so.”

Arthur estimates the current brewery is operating at 85 percent of its capacity. It opened a new 14,000-square-foot distribution warehouse last year. In 2006, the brewery opened its doors, moving into one that Stone Brewing Co. was moving out of that measured 7,500 square feet. Acquiring the suite next door raised the total square footage to 15,000 square feet. With the new warehouse across the cul-de-sac from the brewery, the warehouse is being used to store approximately 1,000 wooden barrels.

Roll Out the Barrels

Although 1,000 barrels may sound like a lot, acquiring barrels that were used to age whisky or wine is the latest arms race among breweries. Some breweries own up to 7,000 barrels to age all types of beers, but the trend began with strong styles such as stouts, porters, strong ales and barleywines. Festivals of barrel-aged beers have been held for years, with tickets to one of the largest in Chicago selling out on the Internet in a few minutes as if it were a reunion concert by the Beatles.

“It’s just the softening that can take place in the barrel, a transition from being a full-ingredient beer,” Arthur says. He mentions the charring, toasting and mellowing that is transmitted to the beer over the nine to 15 months that it spends in the barrel. Depending on the oak used in the barrel and what type of bourbon, whiskey or wine was aged in it, flavors of vanilla, caramel, oak and red wine may be infused in the beer aged in it. Because of the amount of time required to age the beers, producing them requires a substantial commitment of space.

Some of the company’s barrel-aged beers are distributed in 375-millileter bottles that are about the size of a 12-ounce bottle and sealed with corks. Other beers are produced in 22-ounce bottles with caps or 750-millileter ones with corks that hold approximately 25.7 ounces. Two bottling lines are run, one exclusively for sour beers. “The microorganisms that make beer sour are particularly difficult to clean out of bigger packing lines,” Arthur maintains. “We try not to run them on our main line.”

Different combinations of malted barley, wheat, yeast, hops, spices and fruit add complexity to Port Brewing and Lost Abbey beers. Arthur estimates the company uses approximately 50 different barley malts, all of which are malted by specialists. It has installed new packaging lines and tanks and replaced the boiler that was in the facility when it was bought from Stone Brewing.

“The building has been almost entirely rebuilt from the inside out, except the tanks on the hot side and the floors underneath them,” Arthur says. “We’ve tried to retrofit the space as best we could. Stone ran the system hard, and we’ve done a lot of work to put in new equipment. We’ll run that for the next few years. Our biggest plan is to build the new brewery we want to have for the next 20-plus years and be incredibly energized by the ability of a system like that.”