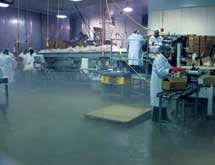 Although it’s a small, family owned company, Prime Pak Foods is impossible to ignore. As a manufacturer of breaded and non-breaded poultry products, such as filets, patties, tenders and nuggets, Prime Pak has stayed relevant in the industry by delivering solutions to customers before its competitors do.

“Our major strength is being able to help our customers develop new products – especially for those in the beginning stages,” President and CEO Todd Robson explains. “We can be a me-too company and make products just like Tyson or Pilgrims. But for the smaller restaurants and up-and-coming chains, we can help them develop new product and individualize their companies to compete with the larger restaurant chains.”

Since it was founded by Robson’s father in 1973 as Milton’s Institution Foods, Prime Pak has evolved, adding services and shedding others to tailor the company to needs of customers.

It also owns related subsidiaries including Victory Processing – a poultry sizing and deboning facility. It also owns Allergy Free Foods, which produces poultry products that are free from top allergens, including gluten.

Prime Pak itself dates back to 1973 when the company focused on distribution and added food manufacturing in the 1980s. In 1986, it separated the two streams and Milton’s Portion Pak Meats – today known as Prime Pak – was born. At the time, the company concentrated on raw and raw breaded products but investments in equipment and facility upgrades have expanded its capabilities.

“I made an addition to add fryers so that we could add a par-baking line,” Robson says. “We also added a larger spiral freezer to increase production pounds and it allowed us to start picking up more customers. That addition was finished in 1996 and in 1999 we added another spiral freezer and another fryer taking us from one line par-baking line to two. Our newest addition was in 2012 when we added a fully cooked line. So now we have an [individually quick frozen] (IQF) line, two par-bake lines and a fully cooked line.”

Fully Capable
The addition of the fully cooked line is in direct response to a growing trend among fast-food restaurants. Fully cooked poultry items have been a mainstay at institutions such as schools but in the past restaurants favored par-bake items. Robson says that mindset is beginning to change.

“We see restaurants that are starting to move to fully cooked products,” Robson says. “For some businesses it’s getting harder to find cooks and employees and others have been sued for not fully cooking their food before serving it so there’s less resistance to fully cooked now. Especially because now we can do it just as good as the restaurants. Ten years ago, we would not have been able to make fully cooked poultry as well as the restaurants, but now manufacturers are able to.” Robson credits “better ingredients, such as breadings and marinades. Plus, improved processing equipment, oven, fryers and freezing capabilities. But the greatest improvement is the better ingredients to complete the finished product.”

As the company has grown in capacity and capabilities, Robson says staying grounded in the foundation his father set has served the company well. “You don’t have to go through bureaucracy here,” Robson explains. “We are very family oriented and all the doors are always open to every employee. It’s very easy here to start new lines and take care of customer issues. We can react quickly.”