Back to Profile Gallery > Progressive Gourmet 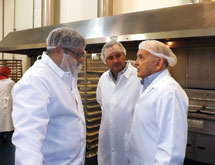 Despite growing into a nationwide distributor of premium specialty food for banquet halls, hotels, country clubs, restaurants, caterers and colleges, Progressive Gourmet has not lost sight of what made the company a success – maintaining a nimble size to serve customers faster and more efficiently than the competition. CEO Chris Collias helped lead a pair of mergers within eight months to further establish his company’s position as a supplier of choice for gourmet handheld snacks and appetizers.

“We still maintain our own distribution in five of the largest banquet cities,” Collias says. “Since we can manufacture and deliver product, we’re quicker than our competitors.

“We’re growing in an economy when many former competitors aren’t in business anymore,” he adds. “There has been massive consolidation in the industry since the Great Recession started. If this was the hors d’oeuvres version of ‘Survivor,’ we’d be at a tribal council.”

Founded in 1992 to help chefs maintain labor flexibility around banquet hors d’oeuvres with a commitment to quality products and customer service, Progressive Gourmet grew from a one-person operation to a leading banquet supplier. The company has about 3,350 customers nationwide that it serves through 180 employees and warehouses in New York; Washington, D.C.; Philadelphia; Orlando, Fla.; and Boston.

Major Acquisitions
In August 2011, Progressive Gourmet launched an aggressive acquisition effort, starting with the purchase of Original Rangoon Co. and quickly following up with Appetizer’s And, Inc. in March 2012. George King, the founder of Appetizer’s And, Inc., took a shot on Collias more than two decades ago.

“The Appetizer’s And, Inc. piece closed a loop on part of my career,” Collias says. “Twenty-three years ago, George King gave me an opportunity to learn the business. Now, I can rebuild an iconic brand and work with George again.”

Collias says this acquisition was attractive because the equipment has allowed Progressive Gourmet to become even more efficient. “It is still a very handcrafted product, but in the most efficient way to give the customers the best value,” he says.

When it acquired Original Rangoon Co. in August 2011, Collias targeted its established distribution partners to allow Progressive Gourmet easy access into a variety of new markets.

“For 14 years, Progressive Gourmet was primarily a distributor,” Collias says. “We realized how vulnerable our regional, foodservice and distribution niche was to economic forces after 9/11, and we set our sights on manufacturing. These acquisitions allowed us to better serve our customers and broaden our customer base.”

Reorganized Leadership
Along with the physical assets, the mergers brought to Progressive Gourmet were the management leadership. Collias quickly realized he needed manufacturing expertise to take his company to the next level, so he hired Rich Foster as CFO and COO from the Titterington’s Bake Shop Co. in Woburn, Mass. Foster helped Titterington’s grow from about $500,000 in annual sales to $50 million.

From there, Foster brought on corporate controller Jeff Lozier, who boasts experience with Gorton’s and Lipton. Nelson Ferreira joined Progressive Gourmet as vice president of operations and technical services after cutting his teeth with Dunkin’ Donuts as a flexible food manufacturing expert.

Of course, having a mentor nearby is never a bad thing, either. Collias says King brings his passion for customer service to the role of board member emeritus, where he makes sure hotel, convention centers and caterers see the value of Progressive Gourmet.

“We are a very hard-working, close-knit group,” Collias says. “We just enjoyed our 20-year anniversary, and we have many longstanding employees who have been with us for more than 10 years. Examples include chef Mark Polito, our director of culinary operations; Michelle Sorrentino, our customer service manager; Leslie O’Brien, our regional distribution sales manager; and Anne Shaller, our distribution purchasing manager.

“It’s not easy making two acquisitions within eight months of each other, but we’re definitely a hard-charging bunch that likes to have fun,” Collias adds.