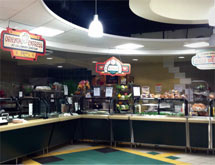 Quest Food Management Systems Inc. was founded on the idea that there’s more to a school lunch program than simply making sure meals include the four food groups, and President Mike McTaggart says the company adheres to those same principles today. Founded in 1985 by his father and a partner, McTaggart says they started the company after spending many years in the industry. Their goal, McTaggart says, was to create a company that provided schools with more of a personal touch to their foodservice programs.

Originally, Quest concentrated its efforts on serving high-end parochial schools in the Chicago area, but in time the company discovered that there was need for its services in the public school sector. McTaggart says an increasing number of public schools are looking for healthier, freshly prepared options, and that’s exactly what Quest provides.

Quest provides full-service food management for K-12 schools throughout the Chicago area. Among the services Quest provides are full-service cafeteria management; foodservice consulting, catering, education and training; and marketing and communications. In everything it does, McTaggart says, Quest operates under the belief that students need healthy, well-balanced meals that they will enjoy eating, and schools need a program that can provide them through a strong working partnership.

“[Our goal is] to work with and serve our customers in an intensely personal manner long since abandoned by the multi-market mega-companies,” the company says, “in order that we identify their needs, wants and desires and implement a custom-designed foodservice plan with passion, wisdom and safety.”

Healthier Options
McTaggart says one of his father’s goals when founding Quest was to bring school meals away from heavily processed foods and return to food prepared freshly. Although there are many other providers who have latched onto that trend in recent years, they don’t have the wealth of experience in those principles that Quest does. “I think that we have always been about wholesome food made from scratch, whereas a lot of companies now are just jumping on that bandwagon,” McTaggart says.

Quest does everything in the schools’ own kitchens, meaning that everything it prepares for students is made fresh. The company avoids pre-packaged and processed foods whenever possible, making its own soups from scratch and slicing meats as needed. “It’s always been the core of what we do,” McTaggart says.

A primary example of the company’s commitment to this ideal is its Quest For Life program, which was initiated in 2010 after a group of parents decided they wanted a complete change to the way their children ate at school. Quest For Life emphasizes traditional cooking methods and using responsibly harvested ingredients.

Under the program, Quest hired executive chefs and retrained the kitchen staff. Frozen meats were substituted with fresh meats, and locally sourced produce replaced cans. The company says the aim of the program is more than just creating healthier meals for students – it’s teaching students healthy eating and cooking habits that can form the foundation of a healthier lifestyle outside of school.

Making Improvements
The Quest For Life program is one way Quest demonstrates how it listens to customers. McTaggart says it always looks for feedback from its customers about its menus and services. “We are a listening company,” he says.

For example, Quest holds regular meetings of food committees made up of students, parents and administrators to review its menus and make adjustments. McTaggart says the company keeps detailed records of these committee meetings and uses them to guide its decision-making. This also gives students an opportunity to take ownership of their daily meals, as well. “The kids become real buy-ins and real developers of what we want at the schools,” McTaggart says.