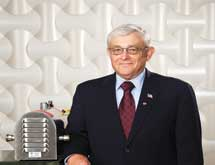 Petroleum is sometimes referred to as black gold. But for R.F. Hunter Co., cooking oil has taken on the value of this precious commodity. The company has been manufacturing edible cooking oil filtration equipment for 65 years – since 1945 – when a fish and chip shop owner in Quincy, Mass., named Robert Hunter developed a filtering machine in his garage.

“He was fortunate in that Dunkin’ Donuts and Howard Johnson’s headquarters were in a two- to three-block radius of where he was,” recounts current owner Dick Santoro, whose wife is Hunter’s daughter. “They were our first major customers. We still have Dunkin’ Donuts.”

Hunter, who is deceased, received a patent on a portable filter in 1952 and sold the company to a competitor in 1972. But in 1984, Santoro and his wife bought it back. Now Santoro’s son is the third generation working in the business.

Filtering edible oils used to deep-fry food can extend the life of the oil, improve food taste and save money. Santoro recommends filtering the oil at least daily, but it depends on the volume and type of frying being done. “Here in New England, we have lots of fish and chip shops so that oil in terms of length of use may be significantly lower than some­body just doing french fries,” he notes.

R.F. Hunter Co. sells two disposal caddies (HF FOG 65 and HF FOG 130) to take oil out of the kitchen to disposal, and five mobile FILTRATORS, the ECCO ONE, HF 80, HF130 HF 165 and the Mini Max III – which is for electric fryers worldwide. “Last week, we just sent one to Dubai,” Santoro points out. The company sells its products through a distributor to companies in Europe, the Far East, the Middle East, Central America and Canada.

Many of the company’s approximately 12 competitors also manufacture deep-frying equipment. “In terms of a mobile standalone filter machine or system, they make one, but that’s not necessarily their main focus,” Santoro emphasizes. R.F. Hunter Co.’s only business is mobile edible oil filtration, he adds, and its machines have higher quality, are more efficient, easier to use and maintain, and cost less. “I think we’re one of the least expensive machines out there in terms of not only initial cost, but operating cost as well,” he maintains.

Sale of the machines is just the beginning of their revenue stream. The filters must be changed daily if they are paper or weekly if they are cloth, and a powder or a compound is added to the oil to obtain the proper results.

“We started off initially and we still do carry the FILTRATOR compound,” Santoro relates. “Several years ago, we also introduced a filter powder. The difference between the two is the FILTRATOR compound is a filter aid that really just eliminates the particles that are in the oil and the sediment, whereas the filter powder not only takes out the particulates but removes almost 100 percent of the free fatty acids.”

Those fatty acids cause the oil to break down more quickly and carry the aroma and taste of the food that was fried. “If you’re not using the powder, you are really not filtering as efficiently as possible,” Santoro main­tains. “If you don’t filter the oil, you’re throwing money away or produ­c­ing a bad product.”

Made in the USA

R.F. Hunter Co. manufactures from 800 to 900 units monthly and the rest of its pro­ducts at its 5,000-square-foot plant in Dover, N.H. Many of the parts and components – most of which are made from 304 stainless steel – are produced cost-effectively by fabrication shops using the latest production techniques and equipment. Some of the pipes are nickel-plated. All parts are produced to the stan­dards of the National Sanitation Asso­c­iation, the UL/CSA and CE.

“When we get the parts here, they are put on the shelf until needed, which is usually right away,” Santoro says. “We have a lean processing manufactur­ing enterprise going on. We get in just what we need just in time, we inspect it and assemble them. There is some automatic equipment, but the assem­bly work is pretty much done by hand.”

Even if demand tripled, Santoro thinks he would stay with primarily man­ual assembly. He estimates the filtration mac­hines last 15 years on average. “We’ve had many customers who’ve had machines much longer than that,” he asserts. “We had one come back in for a checkup that was 30 years old. A lot of it is just a matter of how the customer treats its machines – if they take good care of it, it’s going to last.”