Back to Profile Gallery > R.W. Garcia’s 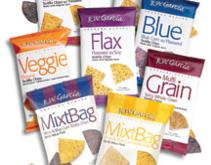 R.W. Garcia’s tortilla chips have been a healthy snack option since the 1980s, with offerings that are organic and non-genetically modified.

The late 1990s and 2000s saw a major boom in health consciousness, with high demand for low-fat, local and organic products. California’s R.W. Garcia was ahead of that popularity wave when it began producing its own “good-for-you” tortilla chips in 1986 – but it wasn’t always a smooth ride.

President Bob Garcia first entered the industry in 1983, when he grew tired of working for a big corporation and decided to start his own distribution company. He recruited a manufacturing partner to make tortilla chips, which he would distribute throughout northern California. After three years, the manufacturer could no longer fill the orders and wouldn’t be able to for six weeks.

“In the food business, if you’re not in the stores, they get upset,” Garcia remarks. “And if you’re out for a week, they forget your name.”

He decided to step up to the plate and start making his own chips. “If we were going to stay in business, we would have to manufacture our own chips,” Garcia says of his decision. “I scraped up all the change I could, bought some machinery and started manufacturing.

“The first product we made was pretty miserable,” he recalls. “It took me a while to learn what I was supposed to know. We started perfecting it and getting better and making different products.

“About that time, it became clear that our distinction in the industry is that we would be a quality manufacturer that went for the better-for-you segment, which, at the time, was very small. We wanted to be on that level in the organic industry.”

Garcia was inspired to focus on healthy, organic products when visiting his son at the University of Pennsylvania and came across a healthy cooking and natural food products expo. “It was a natural food and food products show, and I went in there, took a look at everything and I knew that it was a growing thing,” he says. “I felt that they had something going and a good concept. The idea of ‘better for you’ made a lot of sense to me.”

So Garcia set out to secure suppliers and vendors that would provide healthy products. Today, R.W. Garcia works with many third-party companies to ensure all of its supplies and products are as healthy as it wants. The company’s tortilla chips are made with healthy oils and organic ingredients that aren’t genetically modified. In addition to classic tortilla chips, R.W. Garcia offers chips that have healthy inclusions, such as flaxseed, quinoa, vegetables and multigrains.

It also produces gluten-free crackers in rosemary and garlic, onion and chive, and tellicherry cracked pepper flavors. “They combine organic and healthful ingredients you crave into a delicious, crunchy cracker,” R.W. Garcia says. “Snack with confidence knowing that these delicious crackers are made with all non-genetically-modified ingredients and are trans fat- and cholesterol-free.”

Today, R.W. Garcia has two manufacturing plants on the East and West coasts. Its San Jose location has 40,000 square feet, which – in addition to supplying the West – does offshore shipping to Australia. The company’s Lincolnton, N.C., plant has 60,000 square feet and supplies the South and eastern United States, eastern Canada and mainland Europe. And while many industries and companies are struggling during the difficult economy, Garcia says his company’s focus on health has made it prosper.

“We’re growing really quickly, and I think we’re where the future will be,” he states. “People will want to eat better, healthier products. They’re buying ours because of the quality and the better-for-you product, so we’re in a great position.”

The company also benefits from its desire to remain innovative with product types and flavors. “We do a lot of new, creative items that we find a lot of other people six months later copying us, particularly with the healthy inclusions,” Garcia continues. And, he admits, the food industry is a good one to be in, because it’s a necessity of life. “Before you die, you stop breathing; before you stop breathing, you stop eating, so food is always in the picture.”

R.W. Garcia’s two manufacturing plants adhere to the company’s lofty quality standards. Both facilities are certified by the Quality Assurance Institute, British Soil Association, ProCheck, Orthodox Union and Silliker Lab. They also are approved by the Hazard Analysis & Critical Control Points. “In addition, an in-house quality control staff monitors all production operations and we operate under good manufacturing processes,” the company explains. “Whether [customers] are looking for all-organic tortilla chips or conventional tortilla chips, we will co-pack the highest quality product at the best price.”

In addition to making healthy snacks, R.W. Garcia is focused on being a sustainable member of the food industry – in its processes and facilities. When the company’s equipment is updated, replaced or modified, all scrap metal is sent to recyclers, along with excess cardboard. The company also says all unnecessary lighting in its facilities has been removed, and all office equipment is turned off at night, including computers, monitors and even electronics that have standby and sleep modes.

“At R.W. Garcia, we’re committed to sustainability,” the company states. “Not only do we want to make the world’s best and healthiest snacks, we also want to make the world a little better place to snack in. The corn we buy that does not get processed into finished goods is donated either to cattle farmers or to pet food manufacturers. We use 100 percent of the cooking oil we buy. Nothing is wasted.”

The company also complies with United States and European Union’s standards for genetically modified organisms. R.W. Garcia is an official participant in the Non-GMO Project’s Product Verification Program; the company’s organic veggie, soy/flax, blue/flax and MixtBag products are verified under the guidelines.

“It is our hope that others in the industry will adopt our program or develop and enforce their own,” the company says of its strict standards. “Our goal is a marketplace full of safe, non-GMO products for consumers everywhere.”