Back to Profile Gallery > Railex

Railex was founded on a “do it yourself” principle, but ironically now dozens of customers nationwide count on the logistics company to provide them with safe, reliable and fast shipment of their perishables from coast to coast. Senior Vice President of Eastern Operations and Corporate Logistics Paul Esposito explains that although Railex came about as part of an effort by sister companies Hapco Farms, Powerhouse Produce and Freshouse to ensure better transportation of their own products, it has become a trusted partner to a number of shippers and receivers. 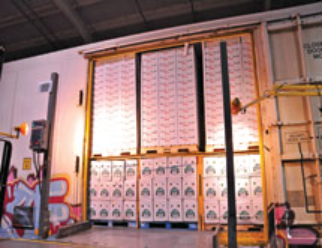 The company operates three facilities – in upstate New York, central California and Washington – and runs two trains a week out of each location. Esposito says Railex can boast a travel time of about five days from coast to coast, something that was practically unheard of before it started operations and has been the key to its success. With a strong understanding of its customers’ needs, advanced technology and complete accountability along every stage in the journey, Railex gives customers peace of mind they can’t find through traditional rail or truck logistics.

The three sister companies began investigating expanding their rail logistics in 2005, in part because they were concerned about the availability of trucks and the delays that sometimes come with them. At the time, the three companies were utilizing about 300 to 400 rail cars per year each, and converting some of their truck operations brought that number up to about 1,500 rail cars. However, Esposito explains, relying on other rail logistics firms came with its own problems.

“As some of the rail services started deteriorating, our products were sitting on a boxcar for longer than we would have liked,” Esposito says, comparing traditional rail logistics to air travelers with constant layovers. A rail car can make many stopovers between its point of origin and its destination, and when it comes to fresh produce and other perishable items, that’s not acceptable. Coast-to-coast rail shipping could take anywhere from 18 to 25 days when accounting for all the delays, Esposito says. When he was brought in by the three companies from Union Pacific to explore their rail options, Esposito found that even buying railcars in blocks would have shaved off only about a day from the total travel time.

The best option, the companies found, was to purchase their own train and operate it themselves. However, operating a dedicated railway just for Hapco, Powerhouse and Freshouse would not have been the most cost-effective option. “Our businesses can support the train, but not the entire train, so we would have to sell it to the industry,” Esposito says.

Once Railex attained its rail services agreement and established the infrastructure it needed, the company began offering its services in earnest in October 2006. Its first cross-country trip, Esposito says, took 76 hours, and today averages Railex 112 hours per trip between Washington or California and New York. Esposito says a five-day schedule is “astounding” in comparison to the start-and-stop schedule railcars experience under normal circumstances.

Railex spent a lot of time getting to know what its potential customers wanted from rail service before launching its platform, and Esposito says what it developed covers all the bases. First and foremost, he says, customers wanted better assurance that their products would be transported safely and without any surprises.

“Being consistent was the mantra that was coming from the industry,” Esposito says.

A major part of that was allowing for customers to know exactly where their products were at all times, from the warehouse to the final destination. To give its customers peace of mind, Railex implemented a radio frequency tracking system in all of its facilities. Each pallet of product that enters one of Railex’s storage or shipping facilities is assigned a bar-coded “license plate.” As workers scan the bar codes, the company’s system is updated automatically with the location of the pallet, as well as with information about where each pallet is going and on exactly which car it will be. Customers have access to this information at all times, giving them an exact idea of where their produce is. Additionally, Esposito says, the company has supervisory checkpoints at each checkpoint along the way to make sure nothing is missed.

Inside Railex’s facilities, railcars also are loaded in refrigerated centers that ensure customers’ commodities are never outside of the cold chain until they reach store shelves. The company says its train features 55 cars equipped with fresh-air exchanges, GPS tracking systems and temperature control.

According to Esposito, another feature of Railex’s platform that provides customers with security is its regular schedule of departures and arrivals. “We’re like JetBlue – we leave a certain time twice a week,” he says, referring to the economy airline.

Railex’s ability to maintain a regular schedule has become a more attractive option for customers in recent years, thanks to the rising costs of diesel fuel and the general volatility in the petroleum market. Esposito says Railex also strives to give its customers the best possible communication they can get, always asking its customers to evaluate its performance and helping them manage their expectations. “We really care about what the customer wants,” Esposito says.

Esposito says Railex also offers customers a unique and effective solution to environmental and legislative concerns regarding their logistics. For example, California recently passed an initiative aimed at reducing carbon emissions that require over-the-road logistics firms to utilize newer-model trucks with emission-control systems. Because Railex only uses trucks for short hauls, it was able to negotiate with smaller trucking firms that could comply with the new regulations faster and avoid creating problems for its customers.

Railex’s capabilities and the changing complexion of the logistics market give the company reason to be confident about its future, Esposito says. The company plans to expand into the southeast in the near future to complement its parent companies’ operations in Atlanta, and Esposito expects Railex to broaden its capabilities to include other fast-moving consumer goods.

Beyond its geographic expansion, Railex expects to be the solution customers will turn to for additional peace of mind in the future. “I see Railex being a driving force into secured food transit,” Esposito says, adding that all of the company’s facilities feature 24/7 video surveillance.