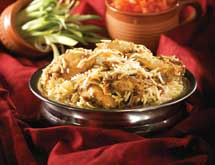 One of the benefits of America’s status as a cultural melting pot is that new cuisines are always waiting to be discovered. Chinese food didn’t become popular in the United States until the 1920s, and 50 years ago hardly anyone who wasn’t of Mexican heritage knew what a tortilla was. Although it doesn’t yet enjoy the same cultural cachet as Chinese, Mexican or Italian food, Indian food is starting its own rise to prominence, and that’s good news for New Jersey-based Rajbhog Foods Inc.

Ajit and Lata Mody opened a small sweet and snack shop in Jackson Heights, N.Y., more than 20 years ago. There, they concentrated on creating authentic sweets specifically for the Indian community. Over time, their products gained in popularity among Indian-Amer­icans and others. Today, Rajbhog Foods is one of the leading manufacturers of Indian sweets, snacks, frozen foods, ice cream and beverages in the country. Vice President of Sales and Marketing Suzy Mody says the company is known for the quality of its products, which comes from their authenticity and the company’s status as family owned.

“We take a great deal of pride in everything that we make,” she says. “It’s our name on the line.”

Rajbhog Foods has changed somewhat its focus in response to the recession to concentrate more on easy-to-prepare frozen meals, but Mody says the formula for its continued success won’t be radically different from the one that’s served it well up to now – authentic Indian food. “It gives some people who are from those parts a bit of a taste of home, and people who aren’t from there a bit of a taste of what India is like,” she says.

The number of Americans who are getting that taste for the first time is growing all the time, thanks to the continued assimilation of Indian-Amer­icans. This, combined with other trends, means Rajbhog Foods stands to become an even larger player in the marketplace in the near future.

Although Rajbhog Foods still focuses on producing traditional Indian sweets such as burfi and katli, along with its eggless ice cream, the recession has made it harder for consumers to justify spending money on luxuries such as those. As a result, Rajbhog has inc­rea­sed its concentration on frozen foods, producing ready to eat versions of traditional Indian foods such as chole, a combination of onions and tom­atoes, and sambhar, a spicy vegetable soup.

With many household budgets tight and more parents working to make ends meet, Rajbhog Foods’ frozen meal sales have grown 400 percent in recent years. Even so, Mody says conv­incing retailers to stock a variety of Indian foods hasn’t been easy. “It’s still up and coming, so we’re still getting some resistance from [the retailers],” she says.

To create more interest in its products, Rajbhog Foods prefers the grassroots approach. The company has tried advertising efforts in the past, but Mody says the economy had made consumers mostly unwilling to try new products without sampling them first. “Once we’re in a particular location, we try to do a lot of food tasting,” she says.

Developing new products depends a lot on feedback from consumers, and Rajbhog Foods uses its cat­ering segment as an R&D department to test out new recipes. Mody says the company caters for events as small as a hundred people all the way to corporate events for 50,000. “We’re always in touch with our everyday consumer,” she says.

The company’s products are made at three plants in Jersey City, N.J.; and Long Island and Flushing, N.Y. Mody says its non-vegetarian product line, Bombay Kitchen, is made in Jersey City, where it is certified halal to conform to Islamic practices and USDA-inspected. Other Indian food producers don’t concentrate as much on halal certification as much, giv­ing Rajbhog Foods an opportunity to reach a broader market. “It does allow us to stand out,” Mody says.

Another way in which Rajbhog Food and Indian food in general stand out is by concentrating on vegetarian options. Mody says the growing number of vegetarian consumers in the United States means more people will be looking for products like those made by Rajbhog Foods. “What’s great about Indian food is that it offers the vegetarian and the vegan a lot of options that are not side dishes,” she says.