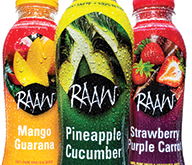 Paul Gregg, Executive Vice President of Raw Foods International LLC, the makers of RAAW™ Juice, knows that juicing fruits and vegetables is a healthy practice, and that sometimes many more nutrients can be consumed more quickly than if the produce was eaten in its natural state. He also knows that juicing the amount of fruit and vegetables in a single, 12-ounce bottle of his company’s RAAW™ Juice could cost a consumer more in produce, time, and equipment than a bottle of RAAW™ Juice does. And sometimes for consumers, it is time that is the determining factor.

“There are times when you wake up in the morning, and you just don’t have time to get that juicer,” Gregg concedes. “Or you get home from work at night and are too tired to sit down at the juicer. You’re looking for an alternative.”

RAAW™ Juices are flash-pasteurized, so they are not raw, but they are produced, shipped and stored refrigerated. “A flash-pasteurized product means it’s very quickly pasteurized for a minimal period of time – roughly 175 to 180 F for about 15 seconds – cold-filled and remains refrigerated for the life of the product,” Gregg explains. “We have a shelf life through the retailers of as much as nine months after the date of manufacture, and once the bottle is opened, then roughly seven days as long as the product remains refrigerated.”

Co-Packed Product
As many juice companies do, RAAW™ Juices uses a co-packer. “We manufacture the product in California at a very reputable firm that we’ve used called Aseptic Solutions USA,” Gregg says. “The key for us has been to manufacture on the West Coast and work with distributors across the country. Co-packers are used a lot. The cost of putting a plant together is about $100 million. So for a small business to start into production itself, it’s just not practical to put that type of capital outlay upfront.”

All RAAW™ Juices are gluten-free and vegan- and kosher-certified. They contain no genetically modified organisms, which is independently verified by the Non-GMO Project, a non-profit organization that builds sources of non-GMO products, educates consumers, and provides verified non-GMO sources. “The Non-GMO Project was something we found was a great way to independently validate our sources,” Gregg says. “That’s been the approach we’ve taken, that we’ve been able to independently validate our sourcing process.”

RAAW™ Juices are free of artificial flavors or colors, free of preservatives and free of any added sugars. They are only produced from premium-quality fruits and vegetables that are obtained from reputable and certified quality suppliers, the company says. “What we tried to do was to have a refreshing beverage anytime, anywhere,” Gregg explains. “That’s what RAAW™ stands for – Refreshing Anytime, AnyWhere.™”

Focus Groups
RAAW™ Juices were tested in focus groups beginning in 2010 after the company was founded in November 2009. The groups were held in every region of the United States and a few places in Canada. “The company really was founded as a way to provide a product that is naturally unique in the marketplace and at the same time not unique at all,” Gregg says. “It’s fruit and vegetable combinations. We live in a society where we should be looking to portions of fruit and vegetables every day, but we’re always on the go and have a really hectic lifestyle.”

The focus groups began with four original flavors – Pineapple Cucumber, Better Beets, Carrot Lemonade and Cranberry Ginger – in 16-ounce bottles. “We thought we knew what shoppers wanted and wanted to hear a little bit more from them,” Gregg says. “From the output of those focus groups, we opted to go to a smaller package size – a 12-ounce package, which enabled us to get to a lower retail price. Our suggested retail price is $2.99. We also put some additional flavors into the mix, and from there, the company really started to take off. It went very well for that package size, and we started to grow nationally.”

Raw Foods International, LLC chose to follow a broad line distribution model, and by October 2012, RAAW™ Juices were available in every one of the United States, including Alaska and Hawaii. “From there, we’ve continued to pick up local and additional national distribution,” Gregg says. Growth has continued through multiple channels in natural, independent and mainstream chain supermarkets, larger drug stores and retailers, and convenience stores.

A Natural Start
RAAW™ Juices first were introduced by smaller retailers. “We were in a large number of natural foods stores across the country, which helped us to test a credible brand in the marketplace,” Gregg recalls. Now RAAW™ Juices are available in Von’s Pavilions, Raleys, Marsh, Giant Eagle, Tops, The Fresh Market, SuperValu, Safeway, a number of Whole Foods regions and larger supermarket chains, as well as the smaller independents in which RAAW™ Juices were first introduced.

“We do very well in the Midwest, from the Chicago area to North and South Dakota,” Gregg declares. “It’s really one of those situations where the rural demographic has done as well as the urban demographic.” Everyone from early-morning dairy farmers to time-stressed urban commuters are using RAAW™ Juices to maintain healthy nutrition. “We have become a snacking society, and so the juices have done very well, not only as a morning starter but also as a snack between meals,” Gregg says.

Where in the Store
RAAW™ Juices can be found in multiple locations in a store, sometimes in the produce section, the dairy and deli, or in the grab-and-go section. “We’ve done very well in produce, but each chain is different,” Gregg says. “I’m very humbled that they’ve put us on their shelves – to place us before their shoppers – and it’s never my place to tell them how best to market us to their shoppers, because they know.

“So rather than explain to them where we should be, we’ve always partnered with them, where they see us best fitting into their strategy to be successful with their consumer,” he continues. “It’s always been a partnership that we’ve tried to foster, and it’s been a great opportunity to work together with retailers. When they allow us to be a part of their community – whether it be through a sampling event, a direct retail store event or a grand opening – it just gives us an opportunity to be a part of their local community, and it’s just been wonderful.”

RAAW™ Juices has numerous competitors in its category, and they are not small. Naked Juice is owned by Pepsico Inc., Odwalla Juice by The Coca-Cola Co. and Bolthouse Farms by the Campbell Soup Co.

“They are all offering a very similar product to what we offer,” Gregg explains. “Most of their juice is a fruit juice or a fruit smoothie, and ours is a 100 percent fruit and vegetable combination – pure juice without anything added. Ours tastes great. If it doesn’t taste great, it’s a one-time sale. We’re after those customers that really want to have a great-tasting product anytime, anywhere.”