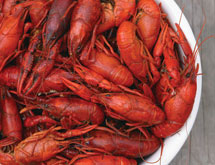 First-time visitors to Razzoo’s Cajun Café may not know what to make of certain items on the casual-dining restaurant’s menu. The restaurant admits items such as “Rat Toes” – shrimp- and crab-stuffed jalapeños that are battered and fried – or its “Grilled Gator Tail” – alligator meat over jambalaya – might sound weird.

Once these visitors actually taste these or other items, however, they’ll be hooked. “Our food is authentic, it’s made from scratch every day in each restaurant and it’s darn good,” the Addison, Texas-based restaurant says. “We try not to take ourselves too seriously; what we do take seriously is our food and our service. To us, nothing is more fun than treating our guests to great food and a great time in one of our restaurants – that’s why we’re here.”

Founded in 1991 by owner and President Jeff Powell, Razzoo’s has treated its guests to a good time for 20 years. The restaurant has 14 locations in Texas, including seven in the Dallas/Fort Worth market. There are also Razzoo’s in Harker Heights, Round Rock and Stafford, Texas, as well as a location in Concord, N.C., outside of Charlotte.

Eight of those locations have opened since 2005, reflective of a steady and controlled expansion plan. Typically, the company opens a new location every 12 to 18 months.

Razzoo’s in February 2012 opened its newest location in Garland, Texas. Future markets include Tyler, Texas, where the company is working with developers to find a location. The company also looks to increase its presence in the Houston and Austin metropolitan areas. Razzoo’s is also looking to add other locations outside of Texas, including on the East Coast, according to the company.

All of Razzoo’s post-2005 locations are redeveloped 6,500-square-foot end-cap or new end-cap spaces in shopping centers, while its older locations are 10,000-square-foot standalone locations built from the ground up. The shift in building philosophy came about through a desire to create higher operating efficiencies, the company says. Razzoo’s owns and operates all of its locations.

The company also stays efficient through its corporate structure. Razzoos employs nine support staff to serve all of its locations.

Quality First
Razzoo’s unique menu items and emphasis on operational efficiencies helped it maintain strong business during the economic downturn. But the restaurant’s ultimate strength comes in the value of the food it serves, both in terms of quality and cost. The company has not adjusted portion sizes downward in recent years, and in several cases has even increased them, it says.

“We’ve worked our tail off to protect value … we challenge ourselves to buy better,” the company says, noting the average entrée price is about $12. “Rather than whine about food costs, we said we have to purchase better. We have to challenge our suppliers to meet our needs or find people who can – we will not downgrade quality.”

Razzoo’s prides itself on serving food that’s true to its brand, which is inspired by the food, music and culture of southern Louisiana. “Our food is authentic, like our bacon-wrapped Shrimp en Brochette, served over savory dirty rice with a jalapeño cheese dipping sauce,” the company says. “We make it all from scratch, every day in every restaurant.”

Diners can choose how to enjoy items such as fresh Gulf Coast oysters, available raw on the half shell, lightly battered and fried, or grilled with garlic butter and parmesan cheese, the company says.

High Energy
Razzoo’s understands that even serving good food at a reasonable cost might not be enough to get customers to come back if the restaurants don’t provide good service. This is why it seeks out people who fit into its philosophy of having fun while taking food and service seriously. The company actively works to recruit and retain people at every level of its operation, from servers and kitchen and bar staff to senior managers.

“We’re always looking for great-looking, upbeat, friendly people who can help us create the kind of fun, energetic atmosphere our guests have come to know and love,” the company adds.

Razzoo’s attracts a diverse crowd of diners and bar patrons.

“We’ve been at this for 20 years, and we’ve made a lot of friends along the way,” the company adds. “We’d like to think that didn’t happen by accident.”