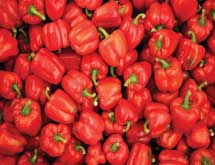 The goal of Red Hat Co-operative Ltd. is simple: supplying the highest-quality vegetables to wholesalers and retailers across Canada and the United States.“We are strategically placed in southeast Alberta on the Trans-Canada Highway, with the ability to ship overnight to customers in western Canada and parts of the U.S.,” General Manager Lyle Aleman explains.

Red Hat began in 1966 with 10 growers wanting to set up an agency to help market its greenhouse vegetables to retail chains. The growers looked at efficiencies in packaging, cooler storage and shipping, creating a high-end operation that has grown to 35 growers.

“Southeast Alberta has the highest levels of sunlight in all of Canada,” Aleman exclaims. “Since our produce is vine-ripened, the abundant sunshine allows us to grow great-tasting produce.”

Red Hat Co-operative’s experienced growers have created a solid staple of crops over the past 40 years. It says it is committed to producing:

Aleman insists that Red Hat only markets vegetables that meet standards for the highest quality and freshness.

Describing itself as a co-operative marketing organization, Red Hat growers collectively grade, package and market their product. All members are located in southern Alberta, with the majority located in the Redcliff and Medicine Hat regions.

“We pride ourselves on the fact that the co-op’s goal is to remain efficient and provide value for the grower,” Aleman states. If a new greenhouse grower entered the Red Hat region, they must apply to the board, which is made up of seven growers, and pay a membership fee upon admittance. Aleman notes that it is to the advantage of any grower in southeast Alberta to become a member of Red Hat.

“It is always a natural choice for a grower to want to market with Red Hat,” he says. “The fact that [the grower] owns a part of Red Hat and are in control of it means that all income of the organization goes back to the grower. That is the benefit of being a member; there are long-established relationships with grocery retailers, and all sales are going right back to you as a grower.”

Many growers at Red Hat are third and fourth generation.

Red Hat centrally grades and packages all produce in its newly renovated 55,000-square-foot facility, which includes a 19,000-square-foot cooler. Aleman notes that the co-op is adding an additional 36,000 square feet this fall to further ensure that quality produce is being shipped to customers and that it has the capacity to handle future expansion.

Red Hat growers use natural predators – or “good bugs” – to combat pests, and bumblebees are used in all tomato greenhouses for natural pollination. “Growers are always looking at improving production through natural alternatives,” Aleman says.

Aleman notes that Red Hat has been growing extensively over the past 10 years, doubling its vegetable volume. “We are producing over 4 million cases [of product] this year and are projecting expansion of 15 to 20 percent,” he says. “We have had several requests from our growers for greenhouse expansion.”

Aleman estimates Red Hat is sending out 40 truckloads of vegetables a week to its customers, including daily shipments to retail chains in Alberta, Saskatchewan and Manitoba. He says the co-op is distinguished by its expertise in growing and its access to the marketplace, and being able to ship overnight.