Back to Profile Gallery > Remke Markets 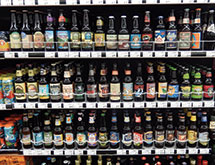 Cincinnati has always been a beer town. In the 1890s, Cincinnatians consumed 40 gallons of beer per capita, two-and-a-half times the national average of 16 gallons, and the town was once called the “beer capital of the world.” Even today, Cincinnati boasts more than a dozen craft breweries and the state of Ohio as a whole produced more than one million gallons of craft beer in 2013, the fourth most in the nation, according to the Brewers Association.

Craft beer is also big business, having an economic impact in Ohio of $238.1 million in 2012, according to the Brewers Association. So when hops-loving locals are craving a pumpkin pale ale, regional grocer Remke Markets wants to be top of mind.

Remke, which operates 12 supermarkets in the Cincinnati and northern Kentucky area, has spent recent years expanding its alcohol sections and developing strong relationships with local breweries to coincide with the rise of the craft beer market over the past decade. In 2014, those relationships paid off when Remke became one of the first area stores to offer Rhingeist beers. The brewery’s Truth and Cougar beers were an instant hit, and Rhingeist is now the best-selling beer for the entire company, consistently outselling the national brands.

For many of its customers, the investment in a premier beer and wine department must seem like a natural step for Remke. The stores already have a strong reputation for having large organic food departments and offering top quality fresh produce, meats, seafoods, delis, bakeries, and specialty foods.

Better Selection
Liquor Director Jeff Lay says the company now carriers 3,000 wines and 1,000 different beers in its Ohio stores – beer can be sold in Kentucky locations but state law bars the sale of wine in supermarkets without a separate entrance. “Our craft beer selection may be the best in Cincinnati,” Lay claims.

Finding new ways to promote craft beers has been critical to building that reputation. Remke was one of the first grocers in Cincinnati to offer a build-your-own six-pack, where customers may pick individual ales from a wall to create unique variety boxes. The program has boosted craft beer sales, Lay says, as customers might not spend $14.99 on a brand they’ve never tried but are eager for a sampling of local brews. “The new beer consumer isn’t necessarily brand loyal,” Lay explains. “They’re more willing to try new beers.”

Since Ohio is a beer hotbed, Cincinnati has had no shortage of flavor and brand options. But while Cincinnati’s neighbors to the south are riding the tail of the craft beer craze, fewer breweries have expanded operations into Kentucky. Lay says Remke has still made a strong effort to match the beer selection in the Bluegrass State, but many Kentuckians cross the border to buy their favorite ales.

One of the most popular unofficial exports has been Yuengling beer, a brand from America’s oldest brewery available in only a handful of states. And it’s not just Kentuckians, Lay says. Sales of Yuengling peaks around major holidays as out-of-staters visiting family stock up on cases and bring the rare lagers home.

Remke strives to be the first to Cincinnati/Northern Kentucky market on launching new beer and wines, even ones that are not packaged. Three Remke locations now offer beer on tap at in-store bars complete with stools and tables with high-top chairs. Having the bars allows Remke to offer customers specialty brews only available on draft.

Reaching Customers
Expanding Remke’s beer and wine footprint takes more than selection, it takes marketing. The in-store bars have given the supermarkets a place to hold beer events with local breweries. Further, the company hired a wine steward to organize wine tastings and quarterly dinners. “It adds a lot of theater to the stores as well,” Lay says of the events.

The wine tastings and dinners serve as a way to introduce customers to some of Remke’s vendors, such as dairy company Weaver Distributing, which often supplies cheeses to pair with the featured wines. Six months ago, Remke began working with importer Mint Ventures to sell wines from Australia. “That’s a great way to do it,” Lay says of the partnership, “continually expanding and recognizing trends to be ahead of the market on fine wines.”

Remke frequently partners with beer and wine companies to offer customer programs. The grocer regularly holds text-to-win contests – customers in April and May could win a 12-foot kayak courtesy of Remke Markets and Yuengling Beer. Beach-like displays have been set up in stores as part of a promotion with Corona. Customers are challenged to take a selfie on the faux beach and share it on the Remke Facebook page to win a variety of prizes.

Further, Lay explains the company is developing a high-tech loyalty program. The program, like the contests, will tie into Remke’s efforts to be known as the premier local retailer for beer and wine connoisseurs in the Cincinnati area.