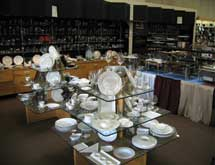 Although the golden spike of the transcontinental railroad uniting the western United States with the East was driven at Promontory Summit, Utah Territory, in 1869, the state still is not in touch with all the trends back East, teases Reid Steenblik, president of family owned Restaurant & Store Equipment Co.

Contributing to that in the restaurant equipment industry is the growing prevalence of the Internet. “The industry is going more toward the Web,” Steenblik says. “Customers use the Web to investigate products and get competitive pricing. When they come into our business and showroom, a lot of times they know the product and know what price they can buy it on the Web. So we have to find a way to be competitive.

“We have to buy and negotiate with the manufacturers so you can be competitive, which is getting more and more difficult because so many of the manufacturers look at volume and offer the price according to the volume, and that has created problems for the smaller dealers,” he laments.

But delivery of larger products is still an advantage Restaurant & Store Equipment Co. has over Internet-based competitors. “We give that service locally, and a lot of people like that,” Steenblik points out.

Steenblik relies on his buying group to meet competitive pricing. Restaurant & Store Equipment Co. is a full-service distributor offering restaurant design and layout services. It also provides custom fabrication and installation of stainless steel products and cabinetry, along with sales and repair of commercial appliances. “We have about a 10,000-square-foot showroom for walk-in trade,” Steenblik notes.

The company’s design services stop at interior design. “We will supply tables, chairs and furniture, but we don’t sell drapes or carpet – just the furniture,” Steenblik says. “We do the layout in the front of the house, but we do not do interior decorating.”

Steenblik maintains restaurateurs in Utah are careful in how they spend their money because they lack the profit from liquor sales due to the tight control on its distribution and consumption.

“You get a larger percentage of people coming to restaurants that don’t drink, and it hurts the tab and profitability of the restaurant,” he notes. “So they have to run lean and mean because they don’t have the liquor profits. We sell some bar equipment, but the liquor licenses are tightly controlled. There are fewer bars than in other parts of the country.”

Restaurant & Store Equipment Co.’s main customers are independent restaurateurs and small regional chains. The growth of national restaurant chains is making it hard for the independent customers the company serves. “They have been going out of business at a faster rate,” Steenblik laments.

The product repair that the company does on large foodservice equipment is still doing well, but smaller appliances – such as warmers and fryers – are oftentimes replaced rather than repaired because parts for them are more expensive when the cost of labor is included than new, low-end products manufactured overseas.

This means parts must be shipped at high overnight rates or five to seven days are lost waiting for them via ground transport. He thinks reimbursement from manufacturers for work he does repairing their products that still are under warranty usually is timely.

“It’s usually an in-house problem – we typically don’t file the paperwork properly fast enough,” Steenblik concedes. “For the most part, if you follow their procedures, the factories are pretty good at it.”

Steenblik sees the future as being one of greater consolidation in the industry. “But I think we have a good future in the services that we offer,” he maintains. “The design and the custom fabrication are areas that a lot of people like, and they are some of the stabler parts of our business.”