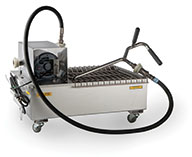 Restaurant Technologies Inc. (RTI) does more than just help its restaurant and foodservice customers manage their cooking oil needs – it ensures that the food its clients make is of the highest quality possible.

“The foodservice industry is a low-margin, penny-based business,” says Jeffrey Kiesel, CEO of the St. Paul, Minn.-based company. “Most companies can usually help restaurants with either the pennies or the quality and consistency of their food, but we’re able to do both.”

The company enjoys a more than 98 percent customer retention rate, which Kiesel attributes both to its unique market position as well as its service level. “We’re really the only ones doing this and we continually innovate to add more value,” Kiesel says. “Yes, we have patents to protect the core of our business, but most importantly, we have great customer relationships and are extremely customer focused.”

A Complete System
RTI’s offerings to customers include an equipment package comprised of tanks, pumps, delivery trucks and other elements. RTI also provides a telemetry system featuring a wireless “black box” device that monitors customers’ fresh oil supply. “The black box drives our dynamic distribution,” Kiesel says. “We deliver oil when our customers need it, and take away waste oil.”

Each customer has access to a web-based customer portal that gives managers visibility into their site’s oil use, as well as its compliance to restaurant standard operating procedures. Data provided by the portal is updated on a daily basis.

Recent additions to the company’s technology include fryer sensors that can measure operator behaviors including whether oil is being filtered at appropriate times, the fryer usage vs. utility costs and total fryer uptime. “We want to be sure our customers are maximizing their equipment use,” he adds. “Without information like this, our customers could be wasting their money, and their food quality will not be as high as it should be. Quality is the reason people come back to restaurants, so we do anything we can to enhance that.”

The company also recently developed a portable cart-based oil management system that can be used at colleges, casinos, hospitals or other facilities with multiple foodservice locations on one site. RTI can also serve those facilities with central cooking oil tanks, Kiesel says.

RTI works with a number of valued suppliers and vendors, including Hose/Conveyors Inc. of Eagan, Minn., which supplies components used in its frying oil management systems.

Investing in Excellence
RTI’s investments in new technology have helped it continue to grow despite being in a sector that has declined by 1 to 2 percent annually in recent years. “Following the 2008/2009 recession, we worked on managing our cost structure and made sure we’re providing services in the most efficient way possible,” Kiesel says, noting that its drivers use telematics and routing systems to plan deliveries. “We are continuing to grow significantly faster than the industry.”

Staff development is another area of investment. “We have a highly trained workforce of drivers, technicians and salespeople, and are very picky about who we hire,” he notes.

Prospective employees go through an extensive interviewing and pre-hire testing process. New employees are trained not only in the technical aspects of their jobs, but on the company’s core values of customers, character, community, courage and commitment. Kiesel considers the company’s culture to be a “collegial meritocracy.”

“We have good people who like to work here and like each other, but we’re also a business that expects people to perform,” he says. “We have a very competitive group who wants the company to be successful.”

RTI’s staff development has earned it high marks for employee engagement. Employees are surveyed every other year on their level of job satisfaction and engagement. It routinely scores within the top five percent nationally among companies recording levels of engagement.

RTI in recent years has received McDonald’s “Partnership Award” noting it importance as a vendor, and has also received local awards noting its growth. In 2014, the company was given a Minnesota Business Ethics Award, given to employers who “have exemplified and promoted ethical conduct for the benefit of the workplace, the marketplace, the environment and the community,” according to the award’s administrators. “This is an award that we’re very proud of,” Kiesel says.