Back to Profile Gallery > Rickland Orchards 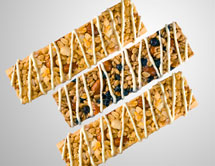 More often than not, healthy foods are perceived as tasteless and lacking appetite-appeal. But Rickland Orchards is defying that expectation with its great-tasting Greek yogurt bars, Jason Cohen, CEO and co-founder says.

The bars, which are dipped and drizzled with Greek yogurt, and infused with real fruits, nuts and more, have a taste to please consumers of all ages. Rickland Orchards explains that the products give consumers a balance of quality ingredients and natural taste, while avoiding the additional sugar additives that are used by the company’s competitors.

Additionally, the company says that its product is the very first Greek Yogurt bar to enter the market. There are five grams of fiber and seven grams of protein and probiotics in each serving, Richland Orchard says.

Cohen adds that the products have even won the approval of his own family. “They’ve got a nice sweet taste to them,” he states. “[It comes] from the natural fruit flavors in the bars. Kids love them too.”

Learning the Business
Cohen founded the Fairfield, N.J.-based company after an established history in the food industry. In 1998, he co-founded Mamma Says, a biscotti company, and then again Sensible Portions in 2005.

Although the market was a competitive one, the company managed to find success with such niche accounts such as the Venetian Hotel in Las Vegas, Costco, BJ’s Wholesale Club Inc. and Kroger. After it formed a partnership with the Kellogg Food Co. in 2001, the Mamma Says brand was eventually sold to Nonni’s Food Co. in 2005.

According to Cohen, Mamma Says provided him with an important learning experience. “From start to finish, it was my graduate MBA in the food business,” he says.

“I made every mistake known to man but kept learning from each mistake which ultimately led to our success,” Cohen explains. “I realized the best preparation you could have for a sales call with a customer is to ask them more questions than they ask you.

“You’re bound to find out what’s working and not working in their stores,” he continues. “So many forget that key ingredient.”

After researching snacks from around the world, Cohen and his former partner then created the Sensible Portions Brand, which developed better-for-you snacks such as Veggie Straws and Pita Bites, the world’s first pita cracker.

“From 2005 to 2010, we grew [the] Sensible Portions brand to $100 million and sold it to Hain Celestial in 2010,” Cohen recalls. “We had great acceptance of our brand because our products tasted great and had a wonderful team of devoted employees who were equally as passionate about the brand.”

A Healthy Mix
Cohen’s inspiration for Rickland Orchards, though, came from his personal life. “Last summer, I decided I wanted to pursue some alternative opportunities and wanted to get back into shape,” he recalls.

When Cohen visited with a nutritionist, she recommended that he eat Greek yogurt. “I started to mix that with different types of fiber, protein and fruits,” Cohen remembers. “When I got back on the road, I realized how difficult it was to mix the key ingredients when on the go.”

To find a solution for this problem, Cohen developed the idea for a granola bar that comes topped with shelf-stable Greek yogurt. But Cohen didn’t want to simply stop there. Instead, he wanted to get to the root of the Greek heritage and challenged food scientists in Europe to make a shelf stable alternative.

The product gives the consumer “that on-the-go convenience that you would get from eating refrigerated Greek yogurt,” he says, noting that Rickland Orchards manufactures such flavors as blueberry acai, peach orchard, apple and honey, cherry almond, toasted coconut and cranberry almond bars.

In addition, Cohen and his team of seasoned veterans have encountered a strong reaction to the products from all over the industry.

“Dry Grocery buyers are chomping at the bit to have the opportunity to sell Greek yogurt in their section of the stores,” he says, noting that it is already carried by Costco, Meijer, Safeway and Market Basket.

Rickland Orchards also recently won the authorization to be carried in more than 10,000 additional retail locations, including Kroger, Wakefern and Walgreens, its first drug chain. “We will be on the shelf in most of these locations in the next few months,” he says.

Tall Tasks
Although Rickland Orchards only launched the product earlier this year, it expects to enjoy sales in the 8 figure range in 2012, Cohen says. “For a company just starting out, that’s a pretty tall task,” he says.

He adds that the product has a very broad appeal to consumers, particularly moms looking for a healthier snack to satisfy herself and the other family members. “Mom is always looking for something that will deliver on taste and keep the family looking and feeling healthier,” he says. “Mom’s the gatekeeper of food in the house.”

Top Talent
Cohen says he is proud that Rickland Orchards has nurtured a working environment with people who enjoy what they do. “In a world where economies are going up and down and people are out of work, it’s nice [to] come to a place where everyone is a self-starter, able to make decisions,” he says.

“We’ve got some great talent,” Cohen adds, noting that this includes his partner and co-founder, President Michael Sands. Previously, Sands was the CEO for Balance Bar, as well as the chief marketing officer for such companies as Ben & Jerry’s Home¬made Ice Cream and Snapple.

The Rickland Or¬chards team also includes its new hire and SVP of Sales Jason Shiver. Shiver has a prior track record of achieving explosive growth leading sales for companies such as Arizona Ice Tea, Atkins and, most recently, Glutino.

In addition to Shiver, Rickland Orchards has a team of talented sales guys such as Brian Ponticello, who oversees northeast sales and Bobby Howell, who oversees southeast sales. “[They] have done an amazing job of getting authorization of our product,” Cohen says.

Another key member of the Rickland Orchards team is its marketing and brand manager, Stephanie Galliano. “She has done a tremendous job working with the team in creating great brand identity and marketing strategies; including working with the public relations firms,” Sands says.

“We also have a great operations and customer support team led by Elsie Amorim and back office controlled by Bob Kessler,” Sands says. “Together, the team guarantees exceptional customer service and satisfaction.”

Aiming to Own
Both Cohen and Sands see a strong future for Rickland Orchards. Sands explains that the company’s present position as the developer of the very first shelf-stable Greek yogurt will allow it to take advantage of the marketing that already promotes the yogurt’s healthy attributes in its traditional form.

In addition, “If we were creating something new and unknown, [we would have] to let people know the validity of it,” Sands continues. “We are simply moving Greek yogurt to a more convenient area of the supermarket and making an ‘on the go’ alternative for today’s busy consumers.”

Cohen says he sees potential for Greek yogurt applications to other products outside the bar category. “We’re looking to grow the shelf-stable concept of Greek yogurt,” he says.

“We’re [also] not dismissing frozen opportunities,” he says, noting that this includes a frozen version of Greek yogurt gelato. “We would like to own this shelf-stable Greek yogurt [segment] first. We are gearing up for Rickland Orchards to be a household name you can trust.”