Back to Profile Gallery > Ricos Products 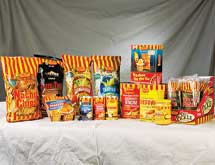 No one has changed the song to “buy me some nachos and Cracker Jacks,” but nachos have become just as much a part of the ballpark menu as peanuts and hot dogs. As the innovator of stadium nachos, San Antonio-based Ricos Products is the company hungry fans have to thank, but its legacy extends far beyond that one product.

In fact, the company marked its 100th anniversary in 2010, and President Tony Liberto says the company is poised to build on that landmark. Liberto is the fourth generation of family leadership for the company, which was started shortly after his great-grandfather emigrated from Sicily to Texas. Originally, Liberto’s great-grandfather, Frank Liberto, sold spices and oils imported from Italy, but in the 1920s he began using a coffee roaster to roast peanuts that he sold when the circus came through San Antonio. Although the business was devastated by the Depression, the Liberto family continued to focus on concession sales.

After his health prevented him from doing much of the necessary day-to-day work for the company in the 1950s, Liberto’s grandfather, Enrico Liberto,  handed control over to Liberto’s father, Frank. Frank Liberto oversaw the company’s growth into movie theater concessions through some strategic acq­uisitions, eventually becoming a full-line theater concessions distributor. How­ever, it was in 1976 at Arlington Stadium outside Dallas where Ricos Products really made its mark.

Frank Liberto wanted to introduce nachos to a ballpark concessions setting, but traditional nachos served in res­taurants require up to 15 minutes to pro­perly melt the cheese. “Serving it fast was the key,” Tony Liberto says. “Somebody who’s watching a game isn’t going to wait in line 15 minutes.”

In response, Ricos Products Frank Liberto developed a heated cheese sauce that could be dispensed immediately over chips and topped with sliced jalapenos, creating the variety of nachos that today can be found at stadiums all over the country. Although stadiums > > at the time worried that nachos would cut into sales of other items like popcorn or peanuts, Liberto says nachos actually helped boost their sales.

“The reason they’re so successful is basically because of the spice of the jalapenos,” he says. Because the heat of the peppers tends to linger, people tend to buy more soda or popcorn in an attempt to wash it out. And although nachos have helped boost other concessions sales, they’re no slouch themselves – Liberto reports that nachos recently overtook hot dogs as the third-most-popular concession item sold at sporting events, behind popcorn and soft drinks. As stadium nachos’ success has grown, so has Ricos Products’. The company now supplies products to customers in 47 countries.

The key to Ricos Products’ continued success, according to Liberto, is balancing quality and cost. “We want to make sure we keep our products at a high standard and also at an affordable price,” he says.

That can be tricky in the concessions industry, where quality concerns aren’t often as important to customers as price. On top of that, the price of ingredients has been increasing steadily over the last several years, putting further pressure on Ricos Products and its competitors. “The economy in the last three years obviously has had a lot of effect on the whole industry, not just us,” Liberto says.

The company is responding by finding ways to become more efficient and absorb higher costs without passing them along to its customers, Liberto says. “Our challenge has been to basically adjust to the economy,” he says, adding that 2010 was one of the company’s best years to date. “We’ve pushed through rather well.”

Liberto reports success in the retail segment, as well. The company recently has expanded more into this area, where food isn’t a secondary attraction as it is in concessions. “[In retail], you want to make sure that the quality is such that you’ll have repeat business,” Liberto says.

Ricos Products started selling to retail stores to reach the people who  wanted to replicate that great familiar experience of eating nachos or popcorn at a movie  theatre or ball park  in their homes. Ricos developed a line of cheese sauces and nacho chips and distinctively flavored ready-to-eat popcorn ideal for individual snacking, but also in sizes large enough to cater to family get togethers and parties. Ricos recently launched a TV ad campaign with the slogan “Make Every Game a Home Game,” proposing that people can now enjoy stadium nachos in the comfort of their own homes.

Of these retail products Ricos, Other recently launched products include a Queso Blanco, a white cheese sauce, which can be used as a dip, topping and for cooking. Other new products include Nachos on The Go, a small bag

of nacho chips and portion cup of cheese sauce conveniently packaged in a ‘To Go’ box. The company says it is getting ready to launch a Cheezy Mustard sauce – meant to pair with pretzels – at theatres in the spring. Liberto says the  R&D team is always busy developing flavorful and convenient offerings that compliment the company’s product portfolio for Mexican dishes, as well as kettle corn and other snack items. Liberto says he also expects movie theater business to rebound from a disappointing 2010.

“In the next two or three years, we see a very bright horizon,” he says.