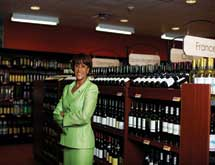 Roadtown Wholesale Trading Ltd. (RTW) is a good example of how a company can grow from humble beginnings into a leader in the food and beverage business, Executive Chairman Delma Maduro says. “We are the largest in the food industry in the British Virgin Islands [BVI].” Based in Road Town, Tortola BVI, the company is a wholesaler and retailer of food, beverages and other goods. Majority Shareholder and Director Peter Haycraft founded the company in 1961.

At the time, Maduro explains, Haycraft saw the need for a local wholesale food business. Two years later, RTW purchased the M.V. Kilros, a cargo vessel that allowed it to serve Virgin Gorda, a sister island.

The company grew steadily over the years, building its first warehouse in 1970. “After several years of expansion and growth, in 1985, the original warehouse was converted to a Cash and Carry to meet the needs of a growing population, and it operated there for the next 23  years,” RTW says. “In June 2008, RTW opened the doors of its new 18,578-square-foot Cash and Carry on an adjacent site that was acquired for that purpose.”

On Sept. 15 2010, RTW opened a flag­ship, state-of-the-art grocery store in Pasea Estate. The 21,000-square-foot market has its own bakery and deli; imported wine and cheese; fresh meat, poultry and fish; a floral shop and “a wide variety of grocery, spirits, tobaccos and household goods,” the company says.

Maduro explains that RTW operates two divisions, Retail and Wholesale, which give the company an excellent distribution network. Its Retail division, which came into being in 1977, is branded Rite Way Food Markets and has four stores.

RTW also owns a 50 percent interest in Fine Food, and is a majority shareholder in Harbour Market. “We manage all of them,” she says. Within the Wholesale Division, the company has a full-service wholesale operation and has distribution rights

“We service hotels, restaurants, bars and other businesses,” Maduro says. “Approximately 56 percent of the company’s business comes from the Whole­sale Division. However, 21 percent of our staff is in Administration, 37 percent is in the Wholesale Division and 42 percent in the Retail Division.”

Maduro has been with RTW for 32 years. “I actually joined the company as the executive secretary,” she recalls, adding that she also has held the roles of sales and marketing manager and managing director. “In December 2009, I became executive chairman.”

“It’s a very dynamic company,” she con­tinues, noting that she enjoys the opportunities to interact with staff, customers and suppliers, and very importantly, other business leaders across the region and internationally. “Roadtown Wholesale is also a very solid company.

“We appreciate and respect our staff and are fair with them. Within the private sector of the BVI, we led the way in providing full scholarships for some staff members as well as other training, employee ownership and a pension plan,” Maduro explains, adding that the company operates with a philosophy of being credible. “Our integrity has always been one of our hallmarks.”

The company maintains a strong re­investment program, and owns all of its > > buildings at its corporate site in Pasea Estate. This program has been championed by Founder and Majority Share­holder Peter Haycraft and is considered to be a great investment, given the high cost of real estate, the prime location and the scarcity of real estate suitable for the food industry.

This includes its new flagship store, which has earned rave reviews from customers, who enjoy the expanded product offering and enhanced shopping environment and experience. Accor­d­ing to Maduro, a common refrain by customers is “I feel like I’m in a world class store in Europe or the U.S.

“I don’t think anyone expected the quality of store we presented to the BVI,” she says.

“Over the last four years or so, we have actually self-financed our expansion program,” she adds. “Because there are no mor­tgages to repay, there is no pressure to change our pricing structure which is to the benefit of our customers and the community.”

Recently, Maduro says, RTW has watched some smaller competitors enter its market. However, “The competition is not just limited to the BVI,” she says, explaining that the United States Virgin Islands is a strong source of competition for BVI retailers. This is because of the close proximity and accessibility by ferry as well as the perception that products in the USVI are generally less expensive.

Maduro says the company’s broad product offering and service will help it withstand this competition. She is hopeful, however, that a favorable change in the BVI Customs Tariff regime will help to lower the cost of goods coming into the territory with the end result being more competitive prices. “We have a pretty extensive range of goods,” she says. “We believe in providing quality goods for our customers. Also, very importantly our products are sourced from all over the world although a high percentage comes from the U.S. This helps us to better cater to our very diverse resident population and our visitors.”

Maduro indicated that the company’s projects likely to be undertaken within the next 10 months will include refurbishing the Rite Way store in the heart of the capital, Road Town, as well as the Fine Food Store in East End. Additionally, the new corporate offices are expected to be completed.

Maduro realizes that it is not enough to have beautiful modern stores, RTW promises customers “unmatched service” which calls for continuous employee training.

“One of the things that we have placed focus on in our company and requires even more attention, is a dynamic training program, to offer the right type of service to really help improve the overall image within the food industry and to help raise the customer service bar in general in the BVI, which has an economy based on tourism and financial services,” she says. There are numerous talented candidates at the company interested in this program, which is being driven by Human Re­sources Manager N. Elton Harrigan, Maduro notes.

Approximately one year ago, the company signed onto an IGA on-line training program to which every member of staff has access. Courses include Customer Service, Category Manage­ment and Supervisory training for the various departments. “We really look at training within all departments including our stores,” she says.

In addition, some of the company’s IT staff have completed Microsoft Certification programs. Several other short, job specific and leadership training programs are done across departments in house, on island as well as overseas. “We’re training the team to take on more responsibility to become more efficient at what we do.”