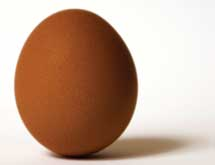 Like everything in nature, endless variety can be produced from simple beginnings. Starting with a chicken egg, Rose Acre Farms creates multiple variations to meet the specific demands of its different customers.

“We do whatever our egg customers want,” declares Ruth Ann Hendrix, corporate secretary and a director. “We go by consumer demands.” These include cage-safe, cage-free, brown or vegetarian eggs, ones enriched with Vitamins D and E, Omega 3, lutein and choline, ones with 25 percent less saturated fat and sport protein powder made from egg whites. This is in addition to a variety of egg sizes and package quantities.

Family owned for five generations, Rose Acre Farms has been operating since 1939. Hendrix’s father, David Rust, started growing sweet corn for the Indianapolis Farmers’ Market and bringing a local woman’s eggs to the market. “When my parents got married in 1954, they built a chicken house, and they kept building them,” Hendrix explains. Her mother, Lois, still is CEO of the company.

Rose Acre Farms has approximately 25 million chickens, 85 percent of which on average lay an egg daily at one of the company’s farms in Indiana, Illinois, Iowa Missouri, Georgia or North Carolina. Producing an average of 21.25 million eggs daily, Rose Acre Farms is the second largest egg producer in the United States.

The secret to a great egg is everything you put into it and who lays it. “First, you start with a great hen,” Hendrix prescribes. “We have our own hatchery, so we buy our breeder birds for the parent stock. We hatch our own eggs, and then we raise them. We buy the majority of our corn from local farmers, and in most of our facilities, we grind our own feed. We can control what feed they’re getting.”

The majority of the chickens that lay white eggs are white leghorns. Their ration is corn and beans along with ground limestone made in Indiana, which provides the calcium needed for the shell. “We do a supplement, and we work with various people to ensure we’re giving them the optimal diet,” Hendrix continues. “It varies depending on how old the bird is what percent of protein they get.

“They’re like people,” she continues. “They need lots of good water and good air. Then we depend on our people to help take care of the chickens every day to make sure the feed, water and air is good. If the chickens are under high stress, they’re more likely to get sick. So our objective is to keep them healthy and unstressed.”

Some people’s feelings about the chickens that lay their eggs are based more on attributing human characteristics to chickens than on sound knowledge of chicken psychology.

“Chickens are social by nature – they are flocking birds,” Hendrix points out. “So they get used to the chickens being right there in the cages with them. So when they get out, they’re in a panic, and it’s not good if that’s the environment they’re used to. For a floor bird, their norm is having birds everywhere. They do have a tendency for birds to pile up in a panic and they all suffocate each other, which is sad.”

Chickens also have a pecking order, and if a fight breaks out among floor birds, the loser of a chicken fight can undergo an involuntary change of career from laying eggs to becoming someone’s dinner. The term “cage-safe” was coined to describe birds laying eggs in cages.

Chickens in cages also are safer from diseases that can be transmitted from droppings on house floors. Floor chickens burn more energy and, therefore, need more food, which raises the prices of their eggs. Unlike brown cows, which do not give chocolate milk, brown chickens do lay brown eggs. But they have more body weight and require more feed, so the price of their eggs is higher.

The majority of Rose Acre Farms’ eggs are packed within 24 hours of being laid, which justifies the company’s saying, “So fresh, the hens don’t miss them!” For those who have tasted eggs freshly laid, the flavor is superior but difficult to describe. “It’s like a homegrown tomato,” Hendrix says. “There’s something about a fresh tomato you grow at home – after three days, it doesn’t taste the same. There’s something in an egg that’s the same way.

“If you eat it in three days, it tastes better,” she insists. Approximately 65 percent of the company’s eggs are sold in the shell; the rest are processed further into egg products and whites, and none are sold cooked. “During these economic times, people trade down on their proteins,” Hendrix asserts. “Eggs are the most economical source of good quality protein. So during hard economic times, we actually do OK.”