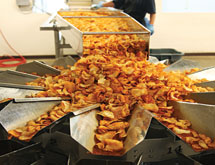 By using the highest quality of ingredients and operating a state-of-the-art production facility, Route 11 Potato Chips is proof that the best things in life are still made by hand, owner Sarah Cohen says. The company’s commitment to quality traces back to her family’s restaurant at the Tabard Inn, one of the oldest hotels in Washington, D.C. For years, the Cohen family has operated a farm in rural Virginia where it grew fresh produce for the restaurant.

“The bottom line is my dad, the late Edward Cohen, was a visionary and a total meat-and-potatoes guy,” Cohen relates. “A neighboring organic farmer knew he was going to have a surplus of potatoes and didn’t have a buyer, so my father decided to purchase these potatoes and produce the first organically grown potato chips. He found a small potato chipper in Pennsylvania that did contract packaging, and they started making what was then called Tabard Farm Potato Chips.”

Within a couple of years, the company landed a huge sale to Williams-Sonoma, and Sarah Cohen was recruited to run the family’s newly purchased potato chip operation in southern Maryland. With a small staff of three, she produced a couple of tractor-trailer loads of potato chips – all from one 60-pound-per-hour cooker. “We were very successful with that order, and I decided I was interested in pursuing the chip thing, but I wanted to do it in Virginia, closer to our farm,” Cohen recalls.

In 1992, the potato chip crew packed up its cooker and moved to a renovated feed store in Middletown, Va. The new factory was located right on Route 11, so the company decided to change its name to Route 11 Potato Chips. For the first year, it was hand-bagging its product.

Once it reached $500,000 in annual sales, Route 11 Potato Chips had to make a decision whether it wanted to take things to the next level. The answer was “yes,” so the company put up a 7,200-square-foot building next to the feed store and invested in two 150-pound-per-hour cookers. At the time, the focus was mostly on specialty food stores, farm markets and local restaurants. “We knew if we made a really good product, people were going to want it,” Cohen says.

Gourmet All the Way
Today, Route 11 Potato Chips operates a state-of-the-art production facility out of Mount Jackson, Va., with the capability to produce 600 pounds an hour. “We designed it ourselves,” Cohen notes. “We have a facility where the public is welcome to come watch. It’s not often you get to see where your food comes from, but we want to be open about our plant and how we operate it.”

The new facility opened the way to a broader customer base, she adds. “We never approached grocery in the past because we didn’t think we’d be able to keep up with the demand, but when we got our new facility, it opened up this whole new market to us,” Cohen says.

The company ships all across the United States to high-end specialty stores, natural food stores and delis, as well as to customers like Whole Foods and Cracker Barrel. But its market strength still lies within the Mid-Atlantic region, Cohen says. “As far as our marketing strategy, I think potato chips by nature have always been a regional product,” she observes. “We’re not trying to take over the world, but we certainly want to take over the 100-mile radius of our plant.”

Route 11 Potato Chips gains fans because of the high-quality ingredients it sources for its kettle-style chips, such as unrefined sea salt from an ancient seabed in Utah. “We wanted to make a potato chip that had a lot of character,” Cohen notes.

Lightly salted is Route 11’s top seller, followed by barbecue and sweet potato, which is actually made from sweet potatoes. However, the company is not afraid to be daring. “Our most controversial chip is the Chesapeake Crab,” Cohen says. “It’s salty and spicy, the same seasoning that crabbers put on their crabs at a crab feast. It’s a flavor that, really, you can only appreciate if you live in the Mid-Atlantic.”

Route 11 Potato Chips used to have a lot more flavors, but Cohen says it’s been cutting back. “There are some flavors that might seem good in theory, but they don’t move off the shelf,” she states. “So, what we’re doing now is sticking with the winners so we can have constant movement.”

Looking ahead, Cohen would like to see Route 11 become the premier specialty potato chip in the United States. “We want to continue growing our sales and converting all the Lay’s eaters into Route 11 fans,” she says.