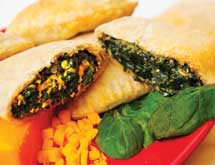 The cuisine of Jamaica is one of the more unique and celebrated styles of food because its flavors, spices and cooking techniques are influenced not only by the indigenous people of the island, but also by its Spanish, British, African, Indian and Chinese inhabitants. Certain Jamaican staples, such as hard dough bread, Easter buns, plantain tarts and the flaky, moon-shaped pastries filled with vegetables or meat known as “patties,” were hard to come by outside of the island – that is until companies such as Royal Caribbean Bakery and Caribbean Food Delights came along.

Royal Caribbean Bakery and Caribbean Food Delights are two separate New York-based companies own­ed by President and CEO Vincent HoSang and his wife, Jeanette HoSang, Jamaica natives of Chinese descent. When Vincent HoSang migrated to the United States to chase the American dream, he realized how much he missed Jamaican food and decided to open his own restaurant in the late 1970s. That restaurant has since evolv­ed into a large-scale bakery and manufacturer of frozen goods that are distributed throughout the world.

HoSang’s parents migrated from the Guangdong province of China to Jamaica in the 1930s, where they opened a small general store in a remote part of the island and started a family. When Vincent HoSang was 12 years old, his parents sold the business and relocated to Montego Bay, Jamaica, where HoSang went to elementary school and high school. He spoke English and the native language, Patois, and developed a passion for Jamaican food. His uncle and aunt, Harrison and Sylvia Ho, adopted him, for which he was very grateful, he says.

In 1968, HoSang migrated to New York, where he took a job at a briefcase factory making $1.60 an hour. In 1974, he met Jeanette. They married two years later and decided to start a family. In 1978, the couple bought a small fried-chicken restaurant called Kingsbridge Delights in Bronx, N.Y., with the intent of introducing Jamaican cuisine, specifically the patties of which he was so very fond. “Patties were the main focus because patties are indigenous to the Caribbean people the way pizza is to the American people,” HoSang says.

The restaurant was an instant success, attracting other Jamaica natives from across New York as well as non-Jamaicans who simply had an appreciation for the island’s spicy patties, whether they were filled with beef, chicken, seafood or vegetables. In 1980, the HoSangs used their earnings to purchase a nearby bakery, which they named Royal Caribbean Bakery, and started baking Jamaican favorites such as bulla, coco bread, sugar buns, spice buns, hard dough bread and Jamaican fruitcakes.

Business was booming to the point where the HoSangs needed to expand to a larger facility. “Because we have a good vision and that we are always told that you should not put all your eggs into one basket, I decided to form a new company in 1984 and separate the patties from the regular bakery items,” HoSang recalls. “We kept the Royal Caribbean Bakery and formed another corporation called Caribbean Food Delights Inc.”

Aside from growing in size, Royal Caribbean Bakery has grown its product line to include an assortment of breads, buns, pastries, tarts, cakes, muffins and pudding. In the buns and breads category, the company produces bulla, coco bread, hard dough bread, round buns, whole-wheat raisin bread and spice fruit buns, also known as Easter buns. “It’s very similar to raisin bread, but it’s sweeter, more like a cake, and they have it with cheese,” HoSang describes. “That is sold throughout the year. However, at Easter time, that’s when we sell the larger loafs in greater numbers – similar to when department stores depend on Christmas for their greater sales.”

“Our business continues to grow,” he adds. “We are thinking that in the next three to four years, we might do another expansion, but we are watching the economy. As you know, the economy is not the most lucrative compared to what it used to be. We are approaching another expansion very cautiously, but if it needs to happen, we will do it.”

“We also have a request to do a mini empanada – a Latino version of a Jamaican patty – but the filling and crust are a little different,” HoSang notes. “That is a brand-new item for us, and it seems to be doing quite well. We make it in beef, but we were also asked if we could make it in chicken – we are not there yet. We need more time to be certain on repeat orders. But we do listen to our buyers to know what they’re looking for, and we also do market research.”

Caribbean Food Delights takes food safety and quality very seriously, HoSang adds. In addition to being licensed with the USDA and FDA, the company has certification with HACCP and Safe Quality Food (SQF) Level 3. “We are pleased that we have always kept our plant to the highest standard of sanitation, and we always keep up with new technology to clean the plant and prevent bacteria,” he says.

Vincent HoSang is a prime example of an American success story. “Ever since we started in 1978, we’ve been giving advice to people who want to start a business because coming to the U.S. and doing business is much different than doing business in a Third World country,” he notes.

“Since then, we started to give advice on how to go about starting a business, but more importantly, we believe in education,” he adds. “If you are not educated, especially in the field of technology, you are going to have a hard time getting a job, so we help with scholarships and tuition.”

In 2002, the Vincent HoSang Family Foundation provided six scholarships to the University of West Indies and invited the scholars to visit the Caribbean Food Delights factory to see firsthand how a food manufacturing facility operates. The organization continues to provide scholarships each year. In addition, Caribbean Food Delights and Royal Caribbean Bakery’s locations recently played key roles in collecting books, computers and cash donations for a book drive to benefit school children in Jamaica, which was led by COO Sabrina HoSang, Vincent HoSang’s daughter.

Vincent HoSang is particularly proud of the medical services and humanitarian aid being delivered to remote Caribbean communities with the help of Caribbean Food Delights and Royal Caribbean Bakery. The organization donated a custom-built, 30-foot-long, fully equipped mobile dental and medical clinic that brings healthcare services to people living in the remote villages of Haiti and Jamaica. The van has two examination rooms – one for doctors and one for dentists. When Dr. Roy Streete, a Bronx-based dentist, is not using it on his medical missions, the van is put into service by other doctors and dentists. “This is one of the gifts that I am really proud of,” HoSang says.

In addition, the Caribbean Food Delights and Royal Caribbean Bakery participates in a program called Voice of the Children of Haiti, which is operated by the Church of God of Prophecy in the Bronx, by shipping barrels of food, clothes and medical equipment to those in need.

“Another gift I am pleased to give is to help the homeless with Father [Richard] Ho Lung, a Chinese priest in Jamaica,” HoSang says. “We gave him $150,000 (U.S.) to build a chapel that also serves as a daytime school.”

In acknowledgement of HoSang’s philan­thropic efforts, the British Com­mon­wealth presented him with the first Caribbean Commonwealth Award at a December luncheon at Man­hattan’s St. George’s Society of New York. Other awards he has received include Order of Distinction from the government of Jamaica and Business Man of the Year from former President George W. Bush.

Annually, for the past 16 years, the HoSangs have been feeding 400 students from different islands that compete in track and field at the University of Pennsylvania.

“I’m proud to help,” HoSang notes. “I just regret that I don’t have more funding to help them the way I’d love to help them. We aren’t billionaires – we cannot help everybody, but we can try to help whoever we can.”