Back to Profile Gallery > Rudy’s Tortillas 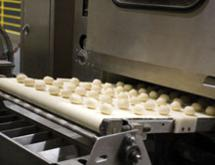 Much like the French uphold fine cheese and wine as part of their culture, Latinos view the tortilla as an integral part of theirs. “Stone-ground tortillas are the most authentic of the tortillas and they are a very personal item in the Hispanic culture,” says Joe Guerra, vice president of Rudy’s Tortillas – one of the largest corn and flour tortilla manufacturers in the United States. Its products are sold through large food distributors to foodservice clients across roughly two-thirds of the United States and 10 countries.

Not only is the tortilla a part of Guerra’s Latino heritage, it is the main product his family has built their business around for the last 65 years. Dallas-based Rudy’s Tortillas was founded in 1945 by Joe Guerra’s grandfather, Jose R. Guerra, as Texas Tortillas Factory in Dallas. In 1964, Jose sold the business to his son, Rudy Guerra Sr., and his wife, Carmen. In 1975, the business was incorporated as Rudy’s Tortillas as it continued to expand into larger production plants and serve more Mexican restaurants. That same year, Rudy Guerra Jr. joined the company as vice president of operations, becoming the first of the third generation in the business, followed by Louis Guerra in 1989 and Joe in 1995.

By 1977, having outgrown its facility, Rudy’s Tortillas purchased its first building – the old Southland Feed Store at 5120 Maple Ave. – with 9,000 square feet on half an acre of land. With 15 employees and more modern equipment, production increased to more than 25,000 tortillas per hour, or more than 40 times the original rate. In 1994, Rudy’s experienced a devastating fire that destroyed the entire plant.

Determined to get back online, the family leased equipment and space in a location close to Fort Worth, Texas, and within seven days resumed production with minimal affect on production or distribution. Later that year, it purchased and customized a plant of 25,600 square feet on three acres in Dallas to resume permanent operations. Then, in 2005, after outgrowing its facility, Rudy’s moved into its current location on Viscount Row, where it is proud to celebrate its 65th anniversary this year. Brothers Joe, Louis and Rudy Jr. took over ownership of the business in 2007.

Keeping Up to Date

At its 110,000-square-foot facility, Rudy’s Tortillas produces 10 million tortillas daily where it operates 24 hours a day, five days per week. The company’s facility in Dallas mixes state-of-the-art equipment with the traditions used by its Latino work force to make tortillas.

To keep up with demand, the family has updated the production process with modern machinery. The traditional corn tortilla, for example, starts with cooking whole-kernel corn in boiling water. Once cooked, the corn is ground into dough called masa. The masa is pumped through feed rollers and put into the oven where it is baked off. Rudy’s operates three flour tortilla lines, six corn tortilla lines and three additional lines that produce taco shells, tostadas and tortilla chips.

Although Guerra says the process is highly automated, the process of making tortillas must remain very hands-on, especially when it comes to dealing with the dough. “The process of making masa cannot be duplicated by equipment,” Guerra says. “You have to be very hands-on and you have to go by feel and texture and the personality and physical attributes of the of the product. It’s similar for flour, too. You cannot replace quality with automation.”

Rudy’s production plant has been upgraded since 2005 with six coolers that hold up to 100 pallet positions, each with a separate shipping and receiving area. At the beginning of 2010, Rudy’s replaced two older production lines with a new corn and flour line. “Capital investment is crucial to the company,” Guerra says. “We have been lucky to get some funding from the Small Business Administration as well as from our banking partners who know our business.

“The increase in productivity and quality is what continues to push us to purchase new equipment. Our larger customers are requesting more and more from us, and we have to be able to deliver. We owe it to our family of employees to upgrade our equipment and continue to grow our business.”

The new flour tortilla lines use a high-tech detection system that monitors attributes of the tortilla, such as diameter, toasting points and texture. Any flaw in the finished product is discarded, ensuring only the best-quality product reaches the consumer. “We are allowing the company to grow through the use of technology,” Guerra maintains.