Back to Profile Gallery > RW Garcia 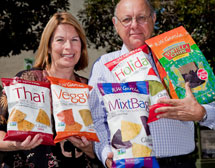 The entire company structure of RW Garcia is based on living a better life. In the early 1980s, company founder Robert “Bob” Garcia divided his time between being a husband, father and devout golfer. Unfortunately, his position as a sales manager for a nationwide snack manufacturer didn’t afford him the ability to live life as he wished.

“It was a fast-moving company with a lot of travel and a lot of ground to cover,” Garcia notes. “I was away from home, living out of a suitcase, and that burns you out after a while.”

In 1982, Garcia took a risk and acted on a desire to live life the way he wanted. “My thought was to open a distribution company in which I could work really hard for three solid days and have three solid days with my family and one day to golf,” he recalls. “And, that’s what I started out to do. However, those three hard-working days soon became six hard-working days.”

Shortly after developing his salty snack distribution business, the company found success. Also at this time, Garcia identified an unmet demand in his northern California region. “The tortilla chip industry was very new and ‘better-for-you’ was a fast-growing concept,” he notes.

“I saw a hole there that could be filled, so I decided to develop an organic and gluten-free product to fill it,” Garcia continues.

As RW Garcia made the transition from salty snack distributor to manufacturer, the company didn’t even have a recipe for tortilla chips, nor the equipment necessary to manufacture the items. What Garcia did have was a 14,000-square-foot facility, unyielding support from his family and a constant drive to succeed. As he explains, even after the company acquired the equipment to manufacture his unique style of tortilla chips, there were still monumental obstacles to overcome.

“I was a salesman. I wasn’t an electrician or a mechanic. But I quickly learned how to do all that stuff once the equipment was in,” Garcia explains.

“For six months, while we got the plant up and running, I would pull 48-hour shifts, one after another,” he continues. “It was a definite act of dedication, but I was committed to succeeding at the risk I had taken.”

Going All In
When Garcia turned his salty snack distribution company into an organic and gluten-free tortilla chip manufacturing facility, he literally developed the business as he went along.

“I was a salesman prior to that, so I had no idea what I was doing,” Garcia says. “It took me six months to figure out how to cook the product so that we could at least eat it. After that, it took another six months to realize how to make it really well.” After a year of trial and error, RW Garcia organic and gluten-free tortilla chips hit the market. Shortly after landing on grocery store shelves in northern California, the product became a sensation with consumers.

“In the beginning, I had managed to rent a facility that was large enough for – what I thought – the rest of my life,” Garcia recalls. “But, that was four manufacturing facilities ago. Now we have just over 100,000 square feet of space.”

From the beginning, ingredients have been an essential part of the RW Garcia product lineup, and the company follows this formula to this day. “We take great pains finding the perfect corn, oil and spices for our tortilla chips,” Garcia explains. In each of its varieties of tortilla chips and crackers, RW Garcia uses only certified, non-GMO corn, the oils contain no trans-fats, and are completely wheat- and gluten-free. The corn used by RW Garcia is certified organic from seed to milling, and the spices are non-irradiated and free of artificial ingredients.

“We put a lot of effort into what we do, and that effort has paid off,” Garcia notes. “We are the leading high-end savory snack company in the United States. We’ve gotten to this point because we manufacture products that are actually good for you to eat.”

Planning the Next Round
Thirty years ago, when RW Garcia started producing organic tortilla chips, founder Robert Garcia had an idea of the type of product he wanted, but he didn’t have a plan as to how that product would come about. “We joined the industry really early on, so everything we did, we had to learn it or create it ourselves,” he notes.

“However, we knew then that we wanted to manufacture the best product possible with the most wholesome raw materials available,” he adds.

Over time, RW Garcia fine-tuned its product and its business to become the leading provider of high-end savory snacks in the better-for-you segment. At the same time, the savory snacks industry also changed.

“[The category] has changed dramatically,” Garcia explains. “There’s been a massive change in the way businesses in the industry run their operations. There are a number of us who manufacture products in the savory snacks category.

“The distinction between the big, 900-pound gorilla in the market and ourselves is that we really care about our products and how good they are for our consumers,” Garcia continues. “We manufacture nothing but the best, and with the best.”