Back to Profile Gallery > Sadler’s Smokehouse 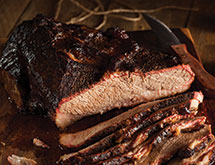 There’s no craving quite like the craving for authentic Texas barbecue. But for most, the 14 hours it takes to properly smoke a brisket is too time-consuming and a spur-of-the-moment hunger-fueled trip to the Lone Star State too costly. In those times, it’s good to have the Sadler family close at hand.

Sadler’s Smokehouse is a family operated producer of brisket and barbecue meats for retailers and the foodservice industry. Its story started with family, friends and good flavor. The company says the first Sadler’s Smokehouse was a 50-sqaure-foot drive-up barbecue stand in Henderson, Texas, opened by Red Sadler in 1948. Although it had a popular local following, the company did not truly take off until 1961, when Harold Salder borrowed $1,000 to open his own smokehouse in Lufkin, Texas. The restaurant focused on replicating Red Sadler’s high-quality, pit-smoked brisket.

By 1968, the Sadler family decided to focus efforts on the emerging foodservice business and opened its first food processing plant. Sadler’s Smokehouse soon began providing its classic, slow-cooked barbecue to stores and restaurants throughout the region, and by the 1970s, its products could be found on the shelves of some K-Marts and Walmarts.

The company took its next step in 1984, when it relocated to Henderson and expanded its operations. Today, it produces meats out of a 300,000-square-foot plant on a 40-acre site. Sixty-seven years after Red Sadler opened his barbecue stand, the company is still operated by the Sadler family and continues to abide by its slow, smoked flavor heritage. “This is the same flavor that our customers have come to trust to be true for each delicious meal they serve, and we intend to keep it that way,” Harold Sadler says in promotional videos.

National Transition
Although Sadler’s Smokehouse had decades of success as a regional supplier, it needed help to continue its growth. In 2007, Wholesome Holdings Group and Brazos Private Equity Partners acquired the company. At the time, the Sadler family was seeking to generate liquidity for estate planning and was evaluating succession plans, according to Brazos.

In Brazos, Sadler’s Smokehouse found an equity partner with experience in the food industry that had a history of working with family owned businesses. Despite the acquisition, the Sadler family remains ingrained in the company. Founder Harold Sadler sits on the board of directors and Randy Sadler serves as a senior vice president.

The acquisition opened up new opportunities and resources for Sadler’s Smokehouse, the company says. Within two years, new leadership, a new marketing strategy and an investment in packaging allowed Sadler’s Smokehouse to expand from a regional distributor with products in 2,000 stores to a national force with a presence at 7,200 retailers, according to Wholesome Holdings Group. “When we joined forces with Harold Sadler and the Sadler family in 2007, we were attracted to the family’s top-quality product and the widening consumer appeal of premium pit-smoked meats and barbecue,” Wholesome Holdings Chairman and CEO Terry O’Brien said in a statement.

Throughout its transition from a small stand, to a regional producer and now a national brand, the pit-smoked flavor of traditional barbeque has always been the backbone of Sadler’s Smokehouse’s products. In addition to its more than 7,000 retailers, the company maintains a strong foodservice business and has supplied meats to major brands such as the Houston Texans and Arby’s. The company’s approach to food safety enables it to use real spices and authentic meats to create bold flavors.

Sadler’s Smokehouse’s product lineup includes a variety of classic Texas barbecue meats, many of which of ready-to-eat or require minimal cooking effort by the customer. The company says it offers premium, pit-smoked whole muscle meats with customer injections, rubs, flavors and spice blends for retail or foodservice; oven-roasted pork loins, turkeys and chicken breasts; and custom-blend batches of sauce. “Whether it’s beef brisket, pork loin, turkey or chicken, all of our shredded or sliced products with sauce are sure to be a favorite on the table – from white tablecloth to the red-checkered ones,” Sadler’s Smokehouse says.

In addition to barbecue meats, the company says it is a leading manufacturer of classic Hispanic-influenced recipes such as barbacoa, carne guisada, taco meat, caritas and seasoned and shredded meats used in tamales, tacos and burritos.

Since being acquired by Wholesome Holdings Group and Brazos, Sadler’s has successfully launched several new products in the retail space, such as Tailgate-Ready beef brisket. In 2009, the company began selling its Dinner For Two line, which offers easy-to-make traditional barbecue combinations such as beef brisket and mashed potatoes or pulled pork and baked beans.

Maintaining Quality
Becoming a national brand required Sadler’s Smokehouse to not only create new, appealing products, but to develop better ways to deliver its foods to market. Using the resources available following the acquisition, the company partnered with Avure Technologies Inc., a leader in high-pressure pasteurization technology, to develop better packaging. The $2.5 million investment resulted in new packaging that increased the shelf life of Sadler’s Smokehouse’s premium pit-smoked products while providing an added layer of food safety. “Our high-pressure locked packaging lets us bring you a safe products with an all-natural process,” the company says. “The true taste of pit-smoke with high-pressure locked packaging ensures your enjoyment.”

For products unable to use the high-pressure pasteurization process, Sadler’s Smokehouse uses a traditional hot-fill or post-packaging cook process, the company explains.

In reaching across the country, Sadler’s Smokehouse has developed long-term relationships with carriers. Those partnerships allow it to offer customers a single-point logistics contact at virtually any hour and to expedite transit times to ensure customers will receive a product when they need it.

Sadler’s Smokehouse’s strategy to morph into a national brand has resulted in innovations for better packaging and improved food safety, but the company’s formula for true barbecue has never changed. “It’s simple: real wood, real smoke, real flavor,” Sadler’s Smokehouse says. “We made a lot of innovations around here, but cooking faster is not one of them. Perfection does take time.”