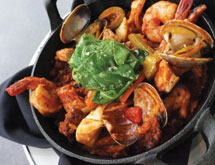 At Salty’s Seafood Grills, success is defined by offering world-class seafood, steaks, service and smiles. Through a combination of quality food, location and high-touch service, the Pacific Northwest restaurants have become regional landmarks.

The Salty’s experience is known for quality and variety. From crab, lobster and salmon to halibut, oysters and clams, Salty’s offers in-season seafood renowned for its freshness and the expertise of its preparation. Beyond seafood, Salty’s reputation is bolstered by steak, chicken, pasta, sandwiches, soup, salad and an award-winning Sunday brunch.

Striving to be Different
All Salty’s are situated on picturesque waterfronts – on Seattle’s Alki Beach, on Redondo Beach in Des Moines, Wash., and in Portland, Ore., on the Columbia River. The locations and layouts of the facilities serve as another drawing card, along with the quality of the food.

Leading Salty’s is Gerry Kingen, who is the founder, president and CEO of Happy Guests International, Salty’s parent company. Salty’s isn’t Kingen’s only experience with developing successful restaurant concepts. Among his many pursuits in the dining industry, Kingen purchased the original Red Robin in 1969 and grew the Red Robin chain before franchising it in 1979. As for Salty’s, Kingen opened the first in Portland in 1980, following that with the Redondo Beach location in 1981 and the Alki Beach location in 1985.

“Physically, all three locations are different,” Kingen says. “But they are all in unique waterfront locations with great views where people can escape lives daily pressures.”

When building its menu and sourcing ingredients, Salty’s approach is to achieve a balance between seasonal specialties and regular staples. In addition, creating a diverse menu means the options appeal to a range of consumer palates and wallets.

“We like to use ecofriendly ingredients and source about 95 percent sustainable product,” Executive Chef Jeremy McLachlan says. “We’ve really moved in that direction over last two years. We are aware of the ways the oceans are being depleted, and we don’t want to be part of that.”

McLachlan says the key is to bring in the highest-quality ingredients that are better than what anyone else offers, such as those from providers like Charlie’s Produce. This is why Salty’s purchases fresh product every day that often comes right out of water.

“In this part of country, we are close to huge waterways,” McLachlan says. “That allows us to get fresh clams, oysters and mussels that are out of the water for mere hours.”

With steaks, Salty’s uses only certified Angus beef because it is all-natural and contains no hormones. Beyond that, the big differentiator for Salty’s is the service and experience the restaurants offer to customers.

“The diversity of the menu, our décor and our total guest experience gives our guests the package they are looking for,” Kingen says.

Constant Evolution
To ensure all three Salty’s operate as efficiently as possible, the company relies on extensive internal communication. Performance reviews are conducted every 28 days. As the executive chef, Jeremy also conducts random checks on each location.

Kingen says the company’s plan is to continue to build on to the foundation each location has established. For example, the five-year plan for the Alki Beach location is to build an adjacent hotel and add 3,000 square feet to the bar. “That is all part of keeping things modern yet timeless,” he says.

Although the company would consider adding another Salty’s to its portfolio if the right opportunity came along, the plan for now is to optimize each of the three restaurant’s growth potential.

“We send out newsletters, we have 100,000 emails on our VIP list and we engage customers through our website,” Kingen says.

One hurdle faced by every company in the hospitality business is the continued weakness in the economy. Kingen hopes the economic healing will begin in earnest after the 2012 elections.

“The capacity for people to spend isn’t going to increase, but we think they will try to live well but smaller,” he says. “We need to find ways to provide a better value, and hopefully the next few years will see a rekindling of the American spirit of life, liberty and the pursuit of happiness.”