Back to Profile Gallery > Sam A. Lupo’s & Sons Inc. 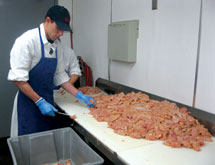 When Sam A. Lupo Sr. and his brother John purchased a corner grocery store in the 1950s from their uncle, they had one main goal: to become known as a purveyor of quality meats and to develop a quality reputation in their town of Endicott, N.Y. The operation – now known as Sam A. Lupo & Sons Inc. – has grown and diversified to be much more than a corner store, but quality remains its hallmark, according to co-owner Sam A. Lupo Jr.

“The reputation we have in this community and beyond can’t be beat,” he says. “Every day, before I come into the office, I go to the stores we supply and help stock our goods. Not a day goes by that a customer doesn’t have something good to say about us or our products, which is a nice feeling. It was a long road to develop that, and it all started with my dad and Uncle John, but we take it extremely seriously and will keep doing our best to maintain the quality we are known for.”

The company’s reputation for quality got its start in that first corner store, where Lupo’s father and uncle developed the recipes for sausages and spiedies that are still used by the company today. (For those not familiar with the Italian delicacy, spiedies – pronounced like “speedies” – are marinated cubes of meat cooked on a skewer, and a Lupo’s specialty.) With the success of the market firmly established, Sam Lupo Jr. and his brother, Stephen J. Lupo, opened Lupo’s S&S Char Pit in 1978, which specializes in charcoal-grilled sandwiches.

By the late 1980s, a number of large grocery chains had entered the Broome County, N.Y., market, and the Lupo family business became a wholesale supplier of its meats and marinades. Wholesale clients now include Price Chopper, Wegmans, Walmart, Sam’s Club, Maines, Giant/Weis, Sysco, Tops and others. In the 1990s, the company expanded even further by establishing a mail-order operation, sending its marinades anywhere in the world and its meats and sausages to any location in the continental United States. Lupo’s also caters local events.

“The wholesale operation started small, but now it’s the largest part of our business,” according to Lupo. “We have a USDA-certified plant for the wholesale business, which mainly serves clients in the Northeast – up to Syracuse and Albany and down to clients in northern Pennsylvania. We also serve Bing­hampton University and Oswego State University.”

Sam A. Lupo & Sons specializes in spiedies – available in chicken, lamb, pork or beef – but it also produces chicken and pork Italian sausages, and marinated boneless, skinless chicken breasts. Lupo’s marinade varieties include Lemon Garlic, Beef, Chicken BBQ, Southwest Grill, Buffalo-Style and Pork BBQ, as well as the Original Endicott-Style Spiedie Marinade, which is “the sauce that made Lupo’s and spiedies famous,” the company says.

“We were not the first to make spiedies, but we’re the only commercial producer of spiedies that I know of,” Lupo says. “We’re not sure where spiedies originated from, but my dad and uncle created the recipe that we still use today. We have a diverse customer base for our spiedies, and if you see commercial spiedies in a store, they are most likely ours.”

As part of its dedication to quality, Lupo’s marinades and sausages are MSG- and gluten-free. “We’re not adding any fillers to our sausages,” Lupo stresses. The company just started producing an all-natural chicken sausage for health-food stores; chickens used for this product were raised on an all-vegetable diet and were not given any hormones or steroids, Lupo says.

Quality also is apparent in the production of its goods, he notes. The company completed a plant expansion this year, which doubled the size of its receiving coolers, added another workroom for 12 additional employees, added a metal detector and added a multivac packaging machine for its marinated chicken breasts. Sam A. Lupo & Sons also expects to be third-party-audit-compliant by September.

The company’s employees, however, are most important in maintaining its quality focus, Lupo stresses. New hires go through a strict training program and are assigned to work alongside a tenured employee to learn all the proper processes and procedures. The company’s plant manager has been working there for 30 years, he says, and any employee has the authority to shut down the operation if they observe a problem.

“We have a very dedicated staff who are very proud of what they put out,” Lupo says. “We have a great following in this community and Lupo’s is recognized for quality products, so our people take pride in their work. Our long-term employees are not going to let new employees put out anything bad – they watch the new people and work closely with them to train them. Everyone really takes ownership in our products.”

Lupo’s is known throughout its New York region for its spiedies, but the company also is a major presence at many local community events throughout the year. Lupo’s and its spiedies are annual participants in the Binghampton Spiedie Fest & Balloon Rally, but the company also is a sponsor of the Dick’s Sporting Goods Open golf tournament in Endicott, N.Y., and the local Binghampton Mets and Tri-City Valley Cats sports teams, as well as other organizations.

The company plans to maintain its quality reputation to ensure its future growth, Lupo says. Lupo’s has acquired a few private-label customers recently, and he expects that business to grow. The company also plans to grow with each of its customers and expand with new products in response to consumer demand. Additionally, Lupo’s son, Eliott, has started learning the business, with the goal of keeping it in the family.