Back to Profile Gallery > Schoenmann Produce

Schoenmann Produce is seeing a growing market demand for its yellow potatoes.

Move over red and russet, yellow is moving in. Although already popular in Europe, the yellow category of potatoes appears to be a fast-growing favorite in the United States as well.

“The yellow category of potatoes is increasing at about 7 to 8 percent per year,” says Cary Hoffman, president and owner of Schoenmann Produce, one of the largest fruit and vegetable distributors in the Houston area and the Gulf Coast. “Ten years ago, the most popular potato was russet, which had about 90 percent of the potato market. Now it has about 70 percent.”

Schoenmann Produce branched out into the potato business in the 1980s. After receiving repeat requests from foodservice companies for different potato varieties, Hoffman bought a potato packaging company and later founded MountainKing Potatoes which has become known for its russet and red potatoes. 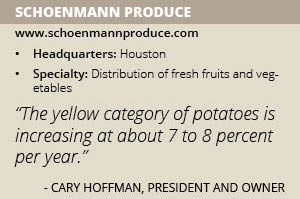 MountainKing Potatoes are mostly grown in Hoffman’s Colorado farms, but also through suppliers in Texas, Kansas, Nebraska and California to ensure a year-round supply.

However, since Schoenmann Produce distributes MountainKing Potatoes, Hoffman soon started noticing a growing hunger for yellow potatoes from the company’s customers. Being a savvy businessman, Hoffman responded to the growing demand by buying Yukon Gold seeds and planting roughly 60 acres on his potato farm in Colorado.

“We were surprised to find out that they grow quite well in Colorado,” Hoffman says. “The amount produced was a lot higher than we expected it to be.”

Which is excellent news for Schoenmann Produce, especially since the yellow potato is growing in popularity. “The demand for Yukon Gold is growing every year.” he adds. “Russet, although still our biggest seller, has stayed the same. Reds have stayed the same as well.

I think it’s due to two things. It’s easier to prepare and the yellow potato flavor profile has a taste and flavor that is different from anything else. It tastes like you put butter on it.”

MountainKing Potatoes offers many varieties of potatoes that include its famous Butter Gold, Butter Russet, Butter Reds and Fingerlings brands. Between all his brands, Hoffman sells roughly 400 million pounds of potatoes per year. That’s more than 10,000 truckloads of potatoes.

Currently, it grows 1,000 acres of yellow potatoes, 600 acres of red potatoes and 250 acres of fingerlings. In addition, the compamy sells and markets russets and other varieties of potatoes for other growers.

“In recent years, small potatoes, like our creamer size yellow and creamer red potatoes as well as our fingerlings, have become really popular,” Hoffman says. “As a result, we have become the largest grower of yellow flesh potatoes in the United States.”

Although Schoenmann Produce is a proud distributor of MountainKing Potatoes, it also distributes for other growers.

Schoenmann Produce carries a full line of premium fresh fruits and vegetables that are never frozen. It is committed to providing consistent quality, competitive pricing and dependable product sources and distribution outlets. Due to its large variety of clientele, the company can buy more economically to offer competitive pricing and turn over its inventory quickly.

Schoenmann Produce offers customized service programs tailored to the customer needs. In addition, the company hosts workshops for its industry and public tours of its facilities. It also employs a corporate chef to help its customers develop recipe ideas.

Schoenmann Produce distributes between 600 to 800 varieties of fresh fruits and vegetables to restaurants, cafes, schools, hospitals, grocery stores, wholesalers and merchants. It distributes in Texas, Louisiana, Mississippi, Alabama and the Southeastern Seaboard.

The company operates out of its state-of-the-art distribution facility in Houston. The 100,000-square-foot facility has five cooling areas and sits on more than 34 acres. Its cold storage capacity is roughly 262 truckloads and features a fully refrigerated dock, customized potato and tomato packing lines.

It also has pressurized ripening rooms for bananas, avocados and tomatoes as well as various temperature and relative humidity controlled coolers. The company also owns a fully refrigerated fleet of trucks.

To ensure quality, the distribution facility is monitored regularly by third-party inspections and participates in a variety of food safety and sanitation programs. In addition to its own quality control group, the company has USDA quality control inspectors on the premises. Schoenmann Produce also uses Primus-certified auditors or those employed by its customers.