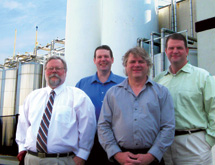 Alan Thomsen is a “lifer.” He has been working at his family’s business – Schoep’s Ice Cream – since he was a boy. “I’ve done just about every job there is to do here,” he says. In April 2012, Thomsen took on the role of president of this beloved, 84-year-old Wisconsin institution. Surrounded by treats such as Caramel Overloader and Badger Tracks ice cream, one can imagine his life isn’t all that bad.

Joining him at the reins are three more Thomsens: Vice President Eric Thomsen, Operations Manager Richard Thomsen and Project Manager John Thomsen. The group of brothers and cousins makes up the third generation to run the business.

A strong combination of knowledge, experience and good old-fashioned hard work is needed to manage a successful enterprise like Schoep’s Ice Cream. “All four of us are lifers,” Alan Thomsen relates. “It takes a lot of work and know-how to keep it all moving forward.” The team works six and sometimes seven days a week fostering the family business.

Schoep’s Ice Cream was started in 1928 by E.J. Schoephoester who prepared the original recipe in the back of his Madison, Wis., grocery store. Twelve years later, upon seeing a promising business, P.B. Thomsen – a famous butter maker from Windsor, Wis. – bought into the company and began wholesaling the ice cream in 2 ½-gallon containers. Following World War II, the half-gallon “Home-Pak” made its debut and became Schoep’s most popular treat. It continues to be the heart of the product line.

In 1999, the company bought Gilles Frozen Custard, which was started in 1938 by Paul M. Gilles at a custard stand on the west side of Milwaukee. Today, it consistently ranks as the top super-premium brand in the greater Milwaukee area.

Schoep’s Ice Cream gradually has expanded and, in addition to 17 direct store delivery trucks covering the Midwest area, it now ships products to 45 states in the continental United States as well as Alaska, Hawaii and Puerto Rico. Last year, it made more than 12 million gallons of ice cream.

Aside from grocery and convenience stores, Schoep’s Ice Cream can be found in venues like amusement parks, restaurants, schools, hospitals, stadiums and vending trucks. It also has a private-label contract-packaging division where it offers organic and gluten-free items.

After years of hard work and dedication to the business, Schoep’s is presently the oldest and largest independent ice cream manufacturer in Wisconsin.

“It’s hard to look back at 85 years and think about doubling and tripling in growth,” Alan Thomsen comments.

The Family Way
As the company continues to grow, there is one thing that stays the same – its value system. Many individuals, aside from the Thomsens, have been working for Schoep’s for years. A number of them are second-generation employees whose parents worked there, as well. “We encourage that and embrace it,” Thomsen notes.

The close-knit group sets Schoep’s apart, a characteristic that Thomsen believes provides an advantage over the competition. “If you operate effectively as a family business, then when your customers call on you, you’ll treat them as the most important person in the world,” he says. A caring attitude essentially becomes engrained to the point of being the natural way to treat people. According to Thomsen, it carries through from the company to the customer, and then cycles back.

That outstanding customer service is one of the company’s fundamental means of success. It is also one of the reasons it remains one of the last independent ice cream companies of its size in the United States. Due to the slow economy and changes in the business, many similar enterprises have gone out of business.

However, Thomsen credits Schoep’s durability to the good fortune of having a customer base that has stayed loyal to the company. The manufacturer, likewise, works with its clients and, together, they help each other through the difficult times. “We respect our customers to the utmost level,” he says. “By doing that, they stay with us.”