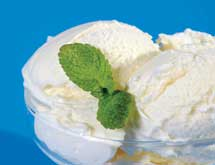 Despite many industry competitors serving up frozen treats that aren’t made of real ice cream, Wisconsin-based Schoep’s Ice Cream stays true to its name and the Dairy State. “We’re purists – we actually make real ice cream,” President and CEO Tim Timm says. “If you look at the store, most people aren’t making real ice cream because it’s expensive to do that. They’re making low-fat ice creams and frozen dairy desserts.”

Ice cream manufacturers are at the mercy of commodity prices for ingredients such as milk and sugar, so Schoep’s focuses on maintaining good relationships to continue providing true ice cream. And good relationships come naturally to the company, which is in its third generation of the Thomsen family.

“We’re one of the few remaining family operated businesses in the ice cream industry,” Vice President of National Sales Alan Thomsen says. “There are a few others, but many of them that had gotten into their second and third generations were gobbled up by multimillion-dollar companies or sent to pasture by the same.”

To avoid the same fate, Schoep’s seeks to extend its family feel to its vendors and suppliers. “We buffer ourselves against the market fluctuations by creating quality relationships with our suppliers,” Thomsen says. “We’re strengthening relationships with them to see if they’re willing to do the same with us and go forward as a partnership.”

Schoep’s also goes to great heights to hire the best employees, because it knows that some of the best ideas come from people familiar with the company’s processes. Having key employees who offer up ideas is just another outlet for Schoep’s to continue to innovate.

“We take a team approach to things,” Timm says. “We have a group of managers at the highest level that get together, and even though every employee may not be directly related to other processes in the company, we take that nucleus and get everyone’s input.”

Schoep’s dedication to going the extra mile for customers means it is Wisconsin’s largest ice cream producer. It made a whopping 12 million gallons of ice cream last year.

The company’s primary products are Home Paks of ice cream, frozen custard and sherbet, frozen yogurt and ice cream novelties. It has two divisions of business: one that sells its own brand regionally to grocery stores, convenience stores and institutional clients; and a private-label business that makes products for national customers.

Schoep’s maintains two facilities in Madison – a manufacturing facility with eight production lines and about 3,500 pallets of cold storage, and a distribution center with 3,500 additional pallets of storage and the company’s distribution vehicle fleet. The company maintains a fleet of about 17 trucks and five semi trucks; it also partners with small trucking companies.

Although Schoep’s is known for its top-quality manufacturing and service, Thomsen and Timm note that there’s more to the business than that – namely R&D. “We have the ability to have someone sit down in front of us, tell us what they want and we turn around and create that product,” Timm explains.

The company’s relative small size means that development of these products can be completed in a fraction of the time it would take large companies. “We can make a decision on a project in a matter of minutes,” Timm says. “We have taken concepts and turned them into finished products ready to go to market in 30 to 45 days. It’s mind-boggling to imagine the big boys even getting the first round of meetings done in that time.”

Schoep’s also ensures it takes a team approach with its employees before making any moves in the future.

“We feel we come up with the best ideas by getting everyone’s input rather than have one guy sit down and say, ‘This is what we’re going to do and how we’re going to do it,’” Timm notes. “Our people deserve to have some say about the future of our business because of the time and effort they’ve invested in the company.”

Schoep’s status as a family owned company is a reflection of the company’s humble beginnings in 1928. In the back of a Madison, Wis., grocery store, E.J. Schoephoester began making ice cream that instantly became a hit with the customers. Twelve years later, a well-known butter maker from Windsor, Wis., bought into the company, which began wholesaling ice cream in 2.5-gallon containers.

“The Schoep’s Home Pak half-gallon line, familiar to ice cream connoisseurs throughout the Midwest, was first introduced after World War II and is still the heart of the Schoep’s product line today,” the company says.

Current Schoep’s President Paul Thomsen started work at the company in the 1940s when he was just 9 years old. He made popsicles for 40 cents an hour, which he had to split with four other workers.

Today, there are six Thomsens at work at Schoep’s – Paul, his brother Les, their sons John and Eric, and Alan and Rich, who are the sons of recently retired Walter Thomsen. But the Thomsens aren’t the only family working for the ice cream maker, it says.

“We encourage family members to work here,” Paul Thomsen said in a statement, “because I look at the company as my second family.”