Back to Profile Gallery > Scooter’s Coffee 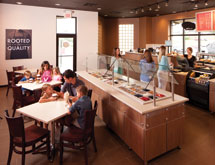 For thousands of people in Omaha, Neb., and beyond, a hot cup of coffee from Scooter’s Coffee is how the day gets started. As Director of New Business Development Todd Graeve explains, the company wants even more people to start their day with a cup from Scooter’s. Even though the Scooter’s brand competes against some of the most ubiquitous names in the industry, Graeve says the company expects to double in size to more than 200 stores nationwide within the next five years.

That sounds like a tall order, but Graeve says Scooter’s offers customers a unique profile compared to the Starbucks and Dunkin’ Donuts of the world. “Starbucks is always going to be a part of the landscape of any community that we go into,” Graeve says. “We’re entering new markets with a clearly different business model, relative to our competition.”

Not only do Scooter’s Coffee businesses look and feel different from most other coffee chains, Graeve maintains the quality of the product they offer is a clear distinguisher. Although the company has found increased success by adding frozen yogurt to some of its locations, Scooter’s remains fixated on brewing and selling the best coffee possible. With these pieces in place, Graeve says, Scooter’s Coffee soon will be a fixture of more people’s mornings.

Better Than the Rest
Scooter’s Coffee was founded in 1998 by Don and Linda Eckles, who took note of the burgeoning drive-thru coffee concept and opened their first drive-thru location in Bellevue, Neb. Soon, the company had opened additional locations in the Omaha metropolitan area and in 2001 began franchising.

When it comes to why Scooter’s Coffee grew so quickly, Graeve says it simply comes down to a commitment to serve better coffee and provide a better customer experience. “We’re in a very competitive business, and so we simply have to provide a better customer experience, including better drinks. We feel confident enough in our coffee drinks to ask customers to test us on this point. You can’t try our drinks and not notice a difference” he says. “What we put in our cup is going to be better than what others put in their cup.”

As a testament to the high quality of the company’s coffee drinks, Scooter’s Coffee has been awarded “best of Omaha” 12 years running. The company also has won other “best-of” awards around the Midwest.

Although coffee is far and away the company’s key product, Graeve says it paid attention to a rise in the self-serve frozen yogurt concept across the country. “We believed there was a real opportunity to add self-serve frozen yogurt, in certain situations, to our drive-thru coffee concept. We saw afternoon and evening yogurt as a compatible and incremental add-on to our morning coffee business,” he says.

Because coffee is typically a morning product and frozen yogurt an afternoon or evening product, Graeve says the idea was a natural fit for Scooter’s sit-down locations. “We like the business model,” he says.

The company’s split between drive-thru and sit-down locations is another way Scooter’s distinguishes itself from the competition, Graeve says. With many Starbucks locations inside other chains, Scooter’s drive-thru locations offer a quick and easy alternative for people on their way to work who just want a cup of coffee without having to get out of their cars and stand in line. Graeve says the company has no plans to change its focus on the drive-thru concept, even as it has success with its co-concept sit-down locations.

“We are always building drive-thru coffeehouses,” he says.

Looking to Grow
Despite the fact that the economy has suffered due to the recession, Graeve says Scooter’s has experienced good same-store sales growth in recent years. “We actively looked to grow over the last few years and find new sites because our concept is quite strong even in a tougher economy,” he says.

With new real estate opportunities opening up around the country, Graeve says Scooter’s is looking for a different type of franchisee. Building its profile across the country with multiple-store owners is what Scooter’s is focused on now. “We’re looking for franchisees who are interested in building businesses with us over next few years,” Graeve says.

The company’s long-term goal is to build significantly more than 200 stores across the country, both franchised and corporate-owned. Scooter’s owns about 25 percent of the system’s locations at the moment, and Graeve says it plans to build more of its own in the future.

In the end, Graeve says the company knows that fuel for its success will be a focus on the basics and, as the company puts it, “amazing people serving amazing drinks amazingly fast.”

“Our success reflects a dedication to fundamental principals,” he says. “There haven’t necessarily been any material changes in the industry that have driven success or failure. Rather, a disciplined commitment to our roots and the things we know work, have paved the way.”