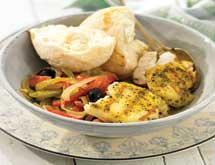 A large, experienced staff, state-of-the-art equipment and processes and a focus on quality and meeting customers’ needs all drive the operations of South Africa’s leading fish brand. Sea Harvest Corp­oration (Pty) Ltd. produces a number of frozen and fresh fish products in natural or convenience format – including frozen at sea and land frozen fillets, loins, chargrilled and crumbed sold in both retail and foodservice markets under the Sea Harvest and Cape Haddie brands.

The company’s products mainly use Cape Capensis or Cape Hake fish, a white-fleshed fish sought after in local and international markets, the company says.

“Internationally, Sea Harvest has been building relationships and partnerships with customers, and some of these relationships have been in existence for more than 40 years,” says Felix Ratheb, sales and marketing director. “The company’s strategy has always been to align itself with leading brands and role players in global markets.”

Sea Harvest owns and operates a fleet of fishing vessels including single and twin trawlers and a factory freezer vessel, the Harvest Lindiwe. The company holds 15-year fishing rights to catch fish off the west and south coasts of southern Africa, Ratheb says.

The Harvest Lindiwe is fitted with state-of-the-art on-board fish processing equipment. Fillets produced on board are deep-skinned and deboned before being individually quick-frozen. Sea Harvest has the capacity to catch and pro­cess more than 40,000 tons of Cape Capensis fish annually, the company says.

In addition to its offshore processing capabilities, the company also operates quay side on-shore facilities. All facilities and Cape Capensis products are fully accredited by the Marine Steward­ship Council, the British Retail Con­sor­tium, the U.S. Food and Drug Admini­stration, and the Hazard Anal­ysis and Critical Control Points food safety management system.

The company’s fully integrated facilities and practices give it the flexibility to process fish to customers’ needs and meet service delivery requirements. “Sea Harvest is considered as the leading and most trusted fish brand in South Africa, while it remains committed to meeting and satisfying customers’ needs and ensuring Cape Capensis is recognized as a premium species globally,” Ratheb adds.

Sea Harvest is committed to sustainable fishing practices. “As consumers and retailers become more and more aware of the environment around them, we have maintained a proactive attitude toward the protection of the resource of fish,” Ratheb says.

The company strives to not only com­ply with South African and other regulations, but also works to create new sustainability initiatives. Sea Harvest is a founding member of the South African Deep Sea Trawl Industry Association. It was founded in 1974 and became a “Recognized Industrial Body” in terms of the Sea Fisheries Act in 1994.

The company’s products also carry a label from the Marine Stewardship Coun­cil assuring consumers that the company responsibly manages its fishing resources and does not contribute to over-fishing.

Sea Harvest’s efforts are greatly enhanced by an experienced staff of more than 2,000 employees. “At Sea Harvest, people are our greatest asset,” Ratheb says. “We encourage our people to take initiative and succeed, and all employees are given the opportunity to develop to their full potential and are rewarded for their efforts.”

“This philosophy allows our employees the opportunity to grow while contri­buting to our company’s success,” he adds.

The company’s skills development ini­tiatives including a Women at Sea program training women to work on trawlers.

As one of the largest employers in its region, Sea Harvest also contributes to its area’s social development. A com­pany-run foundation regularly supports area school improvement programs, small business development and HIV/AIDS programs.