Back to Profile Gallery > Seafreeze 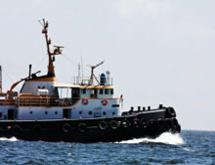 Now, 25 years later, the company has grown to be one of the largest producers of sea-frozen fish on the East Coast. It supplies to worldwide markets, including bait products to domestic and international longline fleets.

The company combines founder and President Richard Goodwin’s fishing background with partner and Vice President Geir Monsen’s processing background to achieve success. Monsen credits the company’s growth to hard work and its ability to understand how to sell products on an international scale.

The company fishes with trawlers that are Hazard Analysis & Critical Points (HACCP) certified. It targets underutilized species “because they are more plentiful and predictable,” Monsen says. Seafreeze operates two large freezer trawlers, as well as a cold storage and trawler service facility for its own boats. It also offers its cold storage and trawler service facility for freezer trawlers not operated by the company.

“Our vessels use mid-water nets and selectively trawl for our targeted species,” the company says. “After hauling back the gear and bringing the cod end on board, the fish are graded and then chilled in refrigerated sea water (RSW) holding tanks. We are capable of bringing the temperature of the RSW down to minus-two Celsius.”

Monsen says having an efficient fleet is important to the capabilities of the company. “We get boats that can handle the fish very quickly and get it frozen because that is what it takes to serve quality,” he states. “We are able to achieve freshness because of the time and temperature of our product between being live and being frozen.” Once the fish are caught, they are immediately dropped into RSW tanks, which Monsen explains is an important part of Seafreeze’s process. “It maintains the quality of the catch, especially in the summer,” he says.

The fish or squid caught by Seafreeze are packed into pans or fiberboard cartons and frozen on board of the company’s vessels using horizontal plate freezers. Once the fish is packed and placed, it takes between four and five hours for the fish to freeze in the plate freezers. “While blast-frozen products may have a better appearance, plate freezers ensure the best freshness due to drastically decreased freezing times,” the company says.

“Our plate-frozen products create a flatter surface for secure stacking, storing and general handling throughout distribution.”

The company catches fish such as illex squid, Loligo squid, and Atlantic mackerel, butterfish and herring. Monsen says each catch is loaded into the company’s cold storage facility where it stays until it is sold and shipped.

Seafreeze’s plant is equipped with both deepwater port and rail spur access, and the company says it is the most modern of its kind in the region. “We need a low storage temperature, which you don’t find in public storage,” Monsen explains. “We run ours at minus-20 [degrees Fahrenheit], which gives us a better product in the long run.”

In 2005, Seafreeze finished an addition to its state-of-the-art cold storage facility that increased its capacity to about 23 million pounds. “In our business, we must accumulate large quantities of our sea-frozen fish and squid to ensure deliveries to customers around the world 12 months per year,” it says.

The company estimates that it loads 40 to 90 high-capacity refrigerated rail cars per year. It says its addition enables the company to operate as a public cold-storage facility. However, Monsen notes that while the company has opened its cold storage up for public opportunities, it has yet to gain a large amount of business.

The largest quantities of fish caught by Seafreeze are ilex and Loligo squid, and Atlantic mackerel, which are separated into different sizes on deck. For mackerel, the company uses grading machines, but separates the Loligo squid by hand. The two species are stowed in their own RSW tanks according to size.

The difference in size between illex squid, butterfish and herring in any catch normally does not vary enough for fine grading on the boat, Seafreeze says. However, the company says it is important that it determines the size after discharging the catch at its plant. It defrosts up to 24 blocks of this catch at the plant to collect data on the length and weight of each species.

“This data enables us to create easy-to-read spreadsheets detailing everything you need to know about the grading of each lot,” Seafreeze says. “These records ensure that we give our customers the size in which they desire. All of our sample reports are available to customers, and we encourage their review prior to confirming sales.”

Once reaching the facility, the company’s stevedores, who palletize the cargo, unload Seafreeze’s ships. The cargo is hoisted from the vessels via a crane and moved into cold storage. But before placement into cold storage, all cargo is tallied, weighed and wrapped.

Talley records, including the pallet weights, are made available to customers. Seafreeze says it is rare for a customer to ask for weight confirmation because it deducts 4 percent from the frozen weight to compensate for drip loss. “The drip loss is always 1 to 2 percent, and this ensures that our customers get an over pack,” the company says.

Monsen says Seafreeze’s process is all part of the company’s reputation for quality, service and integrity. According to Monsen, the company generally sells its product to people who use it as a raw material for their own product or repackage for a consumer product. The product is packed in big units and is not designed to sell to the consumer.

“We sell to larger industrial customers,” he explains. “Some of our biggest business is bait. If you buy a cod product in the U.S., it is generally from Alaska and caught with bait we produced.”

The last few years, Seafreeze has started to bring in new species of fish from around the world that are not native to the New England area. So far, some of the more popular items are black cod, small sea snails, pompano, wild salmon, sea bass, wenchman, horse mackerel and different types of squid. “This business is a natural add-on to the original business,” Monsen says. “The company already has the cold storage facilities, staff and distribution channels to handle the additional products.” Seafreeze expects to continue to expand this type of business, he adds.

Catch of the Day

Illex squid are caught in commercial quantities from the maritime provinces of Canada to North Carolina. Seafreeze’s trawlers catch illex squid from late May through October, with the average size of the illex squid increasing as the fishing season progresses.

“The smaller squid in the beginning of the season are jumble-packed with only the top layer neatly arranged,” the company says. “The bigger sizes are hand laid throughout the block.”

Loligo squid is commonly referred to as Boston squid, and are caught in commercial quantities from Massachusetts to North Carolina. “They are firm and have a delicate flavor, making them a favorite of American and European connoisseurs,” Seafreeze says.

The company’s trawlers catch Loligo squid from October to May, and like the illex squid, the majority of the catch is small at the start of the season, but the size of the squids increase as the season continues.

The squid are graded on board in sizes zero to six. Grades zero through four are hand-laid throughout the block, while grades five and six are jumble-packed with only the top layer of squid neatly arranged.

“Normally, our catching season for Atlantic mackerel starts in late November or early December when the fish move south from Canadian waters into the U.S. zone,” Seafreeze says. At the start of the season the fat content of the fish is approximately 24 percent, but by mid-May, the fat content declines to about 8 percent. “At about that time, all of the mackerel move out of the U.S. waters and back into the Canadian zone.”

The Atlantic mackerel ranges in size from 250 to 800 grams with the majority in the 300- to 600-gram range. “The freezer trawlers of Seafreeze have grading machines on board that can separate the whole/round fish according to our customers’ specifications,” it says. “For confirmed orders, we can also produce sea-frozen mackerel fillets and sea-frozen H&G mackerel.”

Seafreeze says Atlantic herring is available throughout the year, but with considerable differences in size and fat content depending on the time. It notes that the highest fat content is in June and July at 16 to 18 percent.

The fat content gradually declines until the fish begins to spawn in the months of September and October. “It reduces dramatically to 3 to 5 percent by December/January and then it begins increasing again,” the company explains. It adds that the largest herring is caught in the summer months, with sizes ranging from 200 to 350 grams and 20 to 30 centimeters, or 8 to 10 inches.

Seafreeze says catches of butterfish have been limited, with the majority of butterfish production taking place from September to April. It says the fat content is best in the winter months.