Back to Profile Gallery > Seasons Pizza 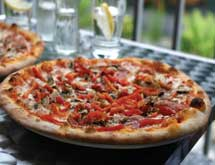 Seasons Pizza – the name itself leads customers to believe that any time is a good time to eat pizza. The company backs up that conclusion by offering more food choices in more places every year, making Seasons an attractive option wherever it sets up shop.

Founded in 1986 by brothers Angelo, Dimitri and Yianni Halakos, the Northeast-based chain has developed its brand using a sustainable and organic growth strategy. “I joined the company in 1996, and when I joined we had four stores,” says John Mazarakis, COO of Seasons Pizza. “Today we have 25 stores. Some years ago, we made a growth plan and we have stood by it, and today we have almost exactly the number of stores we felt we should have at this point.”

Seasons Pizza’s growth strategy consists of opening an average of two stores each year – mainly through corporate growth rather than franchising. In 2010, a year that proved difficult for many, the company opened its second store in Pennsylvania in Aston Town­ship. However, the company is back on track with its original two-stores-per-year strategy. By 2011’s end, Seasons Pizza will open two new stores in Maryland.

“We took it a little more easy last year,” Mazarakis explains. “It was a tough year last year for many and we wanted to step back and gauge the economy. So we opened one store last year, and we have two stores in the works at the moment.”

The company’s conservative strategy has been vital to its overall health in a pizza industry where giant chains are able to offer very low, highly competitive prices. By carefully selecting its markets and setting attainable and sustainable goals, Seasons Pizza has been able to successfully compete against national companies on a local level.

“We offer very fair pricing; I would even say low pricing because we are biting the bullet a little on food costs,” Mazarakis says. “We believe in fair pricing. We want to be known for our quality, but also for our pricing because we have to be competitive with the Papa John’s and the Pizza Huts who are running $10 and $11 specials right now.”

By keeping a close eye on operations and labor costs, Mazarakis says Seasons Pizza is able to offer the same $10 pizza deals and daily specials without skimping on quality ingredients. Also, Seasons Pizza can offer things many of the large pizza chains do not – more food choices.

Pizza chains often find themselves chained to their flagship product and traditional sides such as wings and breadsticks. However, in addition to its award-winning pizza, Seasons Pizza also offers a wide selection of Italian and American fare.

The newest addition to the menu is gluten-free pizza, another product not often seen at larger pizza chains. The wheat used in pizza dough and some other food products triggers allergic reactions in certain people. They can now order from the restaurant’s regular pizza menu and simply request gluten-free. Gluten-free Philly, a restaurant blog dedicated to those with celiac disease, voted Seasons Pizza 2011’s best gluten-free pizza in Delaware Valley.

“We try to stay current,” Mazarakis says. “There’s a current trend in our industry to offer products that are gluten free and we’ve been happy to offer the new product. We get positive feedback about it every day.”