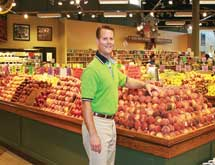 More and more, big box retailers are super-sizing their stores by adding groceries and produce. As a result, if a consumer needs a new Wii game, laundry detergent and a couple of T-shirts, he can also do his grocery shopping at the same place. Small, independent retailers often fear for their business when a big box giant moves in, but this is not a huge concern to Thomas Balistreri III, vice president and co-owner of Sendik’s Fine Foods Inc.

“New competition always presents its challenges, but it also helps us stay focused on our mission, on what we do best – providing customers with an unparalleled shopping experience,” he says. “People are curious by nature and may try out a new competitor for a while, but then they come back to us because we are what they know and expect from a food store.”

So what is it about Sendik’s Fine Foods that its loyal customer base knows and expects? According to Balistreri, it is the company’s dedication to quality and service in every aspect of its operation. Those are the values, he says, that he learned from his grandfather and father, who managed the business before he and other members of the third generation took over.

“The No. 1 thing they taught me was always quality – to provide the best quality and best customer service,” he says. “My grandfather always said, ‘don’t worry about the competition, just do what you know how to do and do it to the best of your ability.’”

The dedication to quality service started back in 1926 from the back of a cart. Thomas Balistreri Sr. left his native Italy when he was 17 to avoid being forced into Mussolini’s army, and he moved to Milwaukee, where his father, uncle and two brothers already lived. His father and uncle had started a successful wholesale fruit and vegetable business, which his brother Tony eventually took over. Tony peddled the produce on a cart, and when the business grew quickly, he asked Tom to join him.

In May 1926, Tom and Tony Balistreri and their father, Salvatore, opened the first Sendik’s location in Shore­wood, Wis., just north of Milwaukee. Three years later, they opened a second store. By 1949, there were three Sendik’s stores, each run by one of the Balistreri brothers – Tom, Tony and Ignatius. Although the three stores shared the Sendik’s name, they were all independently owned and operated.

The family’s second generation took over in 1973, and the third generation came on board in 2001. Tom Balistreri III runs Sendik’s Fine Foods in Brookfield, Wis., with his brother, Jim Balistreri, and sisters, Lori Barczak and Angela Wheeler. There are also two other operations in the Milwaukee area – Sendik’s Food Markets and Tony Sendik’s Market – which are independent from Sendik’s Fine Foods.

“Our goal at Sendik’s Fine Foods is the same as when the company first started,” Balistreri III stresses. “We want to continue to deliver our grandfather’s message of providing the best quality, best service and best value that we can.”

According to Balistreri III, Sendik’s Fine Foods seeks out “the best quality available,” in any product category. Just like his grandfather, he goes to the wholesale market every day and hand selects the store’s produce himself. All of the goods in its gourmet delicatessen are made from scratch, as are many of the items in its bakery. Fresh seafood is flown in daily, and the store’s meat department is “unparalleled, not just because of the quality cuts and hand-made sausages that we feature, but because of the full staff of seasoned butchers on-hand to assist customers with special requests,” he says.

Additionally, because the family has been in business since 1926, Sendik’s Fine Foods has a long history with many of its wholesalers. As a result, the wholesalers know and understand the store’s quality expectations, and don’t provide anything that won’t meet its standards. “It’s a partnership with the wholesalers – we have to work together to both be successful,” Balistreri says.

To ensure Sendik’s offers the best value, Balistreri watches the markets closely and monitors the weather to see how that will affect the produce supply. This information allows him to set prices that are competitive with the market each week, he explains.

“We buy from the local markets and wholesalers and because they are local, we don’t have to commit to specific products as far out, so we can simply offer the best goods in the market.”

While the economy remains slow, consumer spending continues to be restricted, Balistreri says. To ensure Sendik’s Fine Foods’ business remains stable in this climate, he stresses the importance of staying focused.

“These are uncharted and challenging times, but we believe in being consistent in our message and offerings,” he says. “Because customers can consistently count on high-quality products, experienced and friendly staff, and value for their money – they stay with us.”

Service is a key part of that message. Because it is such an important part of Sendik’s culture, new employees receive extensive training in customer service, where they are thoroughly taught the company’s policies, procedures and expectations in service.

After going through training, new employees tend to pick up on the service focus from people who have been there longer. And the company has a number of long-term employees – Sendik’s says it measures its success not just in dollars and cents, but also in how it has developed employees and built lasting relationships with them.

With Sendik’s Fine Foods’ strong reputation in the Milwaukee area, Balistreri is confident the operation will open a new store at some point, but not until the economy improves and remains stable. Until then, the company will continue to do what it does best.

“We get many comments from customers about our employees,” he notes. “They know many of the customers’ names and what they like, and that level of personalization goes very far. Plus, our entire family works together at the store, and we are always there and accessible to the customers. It means a lot to customers and employees to see the owners working the business, and we plan to be here for a long time.”