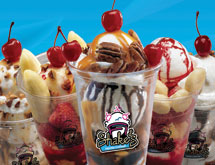 With the worst of the recession behind it, Shake’s Frozen Custard is ready to mark its 20th anniversary with new locations and tasty new frozen treats.

The company, founded in 1991 in Joplin, Mo., will open a new franchise location in Auburn, Ala., in the fall, its second store there following an opening in late 2010. The Auburn locations represent new growth for the company.

“In 2008, we intentionally slowed our growth and analyzed our financial model and what products and services our customers value the most,” President and CEO Corey Osborne says. “We had the benefit of early growth, so understanding that there were emerging challenges in the national economy and the general lending environment, we felt that was a good time to really analyze our franchise offering and our products.

“Making the decision to slow new store growth was difficult and required some discipline for sure, but taking that time then paved the way for today’s Shake’s model, which can flourish in any economy and in a wide variety of market demographics,” he adds. “We now feel that we’ve perfected our store-level model and are eager and fully prepared for substantial and sustainable growth.”

There are 23 Shake’s locations in Alabama, Arkansas, Florida, Kansas, Louisiana, Missouri and Texas. Of those, four are corporate-owned and the rest are franchises. While most are freestanding, the company recently introduced an end-cap model to expand into smaller footprints. “With a deep understanding our customers and how to offer them the best possible service,” he says. “We can scale our locations up and down based on the market’s potential.”

Osborne’s father and stepmother Don and Debbie Osborne founded the first Shake’s Frozen Custard location in Joplin, Mo., in 1991. Corey Osborne, a graduate of the University of Arkansas with a degree in architecture, helped launch the original store.

The family developed all of their frozen custard recipes from scratch with help from a number of vendors. “We’ve been blessed with a tremendous product,” Corey Osborne says. “We’ve had the good fortune in working with excellent suppliers, many of whom still work with us today. They helped us develop unique recipes.”

The second Shake’s location opened in Fayetteville, Ark. in 1997. With six years of experience under their belts and the initial struggles of launching the business out of the way, it was easy for the Osborne family to take the leap into franchising in 1998.

Shake’s Frozen Custard makes all of its products on site in specialized machines, and adds specially prepared vanilla to its mixes, giving its frozen confections a creamy texture that differs from its competitors, Osborne says.

During its 20 years in business, Shake’s has introduced a number of new products, including a line of cakes in 2005. New products launched in time for the anniversary include a “wedding cake”-flavored Concrete mixer and expanded cake flavors. Shake’s products are made fresh from natural ingredients, Osborne adds.

Serving up these products is a staff of employees who focus on making customers happy. “We, of course, train on how to make our products and the nuts and bolts of operations, but we really focus on employee attitude,” Osborne says. “We don’t serve frozen custard here – we serve customers.”

Making customers happy starts with a happy staff. “Our culture is very fun and family oriented, and we hope customers feel that experience when they visit us,” he adds. “We have happy, loyal team members … at the end of the day, we’re selling ice cream, so this is a very fun place to be.”