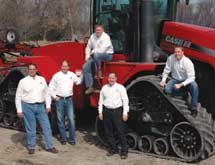 In the late 1980s, the partners of Sinner Bros. & Bresnahan (SB&B) sat down for a conversation that would forever change the course of the nearly 60-year-old company. As an agricultural producer of soybeans, wheat, corn and beef, Robert Sinner, part-owner and partner of SB&B, says the company’s revenues had begun to suffer along with other farmers across the Midwest due to the most severe drought the region had seen since the 1930s.

“We talked about what we could do differently in our operations that would set us apart, or different ways to maximize our efficiencies and potentially bring in more cash flow,” Sinner says.

The partners knew that many competitors did not measure up to the high-quality SB&B produced on its 4,700-acre farm. Now, it needed to let its customers know the same thing. “We began looking at marketing directly to food manufacturers,” Sinner says.

Around that time, Sinner chaired the International Promotions Committee for the United Soybean Board where he managed 400 projects in 85 countries. “I began to realize that there were food companies interested in sourcing better-quality, more-consistent soybeans used directly for the food manufacturing process that would make their product more consistent, better tasting and ultimately better quality,” he says.

SB&B spawned SB&B Foods Inc., which markets and supplies identity-preserved (IP) food-grade products around the globe. IP crops assure the customer of what specific variety is being delivered. In 1997, SB&B Foods became a separate entity so the parent company could better track its growth and areas for improvement. SB&B Foods produces, processes and markets food grade products such as soybeans, spring wheat, white sorghum and rye. It deals only in non-GMO and organic crops, eliminating the risk of genetically modified contamination.

SB&B Foods markets all SB&B products as well as for 125 other producers in the United States. Its production covers several states, and it supplies to 14 other countries. Outside of the United States, Europe and Asia are its biggest markets. “We do a lot in northern and southern Asia,” Sinner says. “There are certainly some countries that are more advanced in purchasing IP production from the U.S. There are also food companies that are in developing markets, and as their economies grow, the food manufacturers want to improve their product with more consistency.”

SB&B has been a quality IP producer since 1906 and remained so when it established a family partnership between the Sinners and Bresnahans in 1952. Now in the fourth and fifth generations of leadership from both families, SB&B has responded to the ever-increasing demand for food safety by forming Identity Ag Processing.

“What completed the marketing entity was when we built our state-of-the-art facility where we are conditioning, packaging and shipping the product [to ensure] food safety and traceability,” Sinner says. In 2004, the company built a 45,000-square-foot plant in Casselton, N.D., and in 2010, completed its Bloomer, Wis., facility. The two clean and package nearly 2.5 million bushels of traceable specialty crops annually.

To guarantee the quality of products leaving its facility, Identity Ag uses proven technology and equipment such as magnets and metal detection; a de-stoner; roller separators; an infrared color sorter; and a handling system that consists of belt and vibratory conveyors, slow elevator speeds and let-down ladders to minimize damage.

Identity Ag handles only non-GMO and organic products. It is a separate entity with the authority to contract its services outside of SB&B. However, Identity Ag is undoubtedly a strength to its parent and sister company.

“You basically become vertically integrated with production, processing and marketing,” Sinner explains. “We bring some unique characteristics to each relationship because we understand production agriculture, and we understand the strict requirements of the food industry.”