Back to Profile Gallery > SMG – SAVOR Food and Beverage 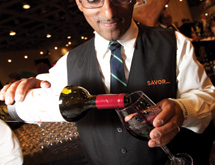 National foodservice organizations typically take a universal approach to their services – the food you find at one location is more than likely going to be very much the same at any other location managed by that particular company.

This isn’t the case for SAVOR, the foodservice and catering arm of international public facility manager SMG Facilities. Each of the 120 facilities served by SAVOR worldwide reflects their individual communities instead of taking a one-size-fits-all approach.

“We understand our success is all about the local food experience,” says Shaun Beard, senior vice president of the Conshohocken, Pa.-headquartered company. The company considers each of its sites as a separate unique hospitality business that employs local people, sources local products and delivers local hospitality. “Everything is focused on the city,” he adds. “With SAVOR, you’re not going to get what was done in another city, you’re going to get something unique, something which defines the location as a special place.”

One example of this approach can be found in Chicago, where SAVOR manages food and beverage operations for conventions and other special events at McCormick Place, North America’s largest convention center. SAVOR partnered with the Chicago Botanical Garden to maintain a 20,000-square-foot produce farm on the top of the convention center’s west building.

SAVOR’s local approach extends to charitable and service activities, too. The company records more than 6,000 community service hours annually for organizations including Habitat for Humanity and Ronald McDonald House, just to name a few.

Cultural Immersion
SAVOR’s newest facility will open its doors in September 2013. The 16,000-seat Pinnacle Bank Arena in Lincoln, Neb., will host concerts and other events as well as serve as the home of the University of Nebraska’s men’s and women’s basketball teams.

Each of the concession stands and restaurant facilities in the arena are individually crafted to reflect certain aspects of the city and state’s rich history. The Chimney Rock Cantina facility will feature layered colored rock found in western Nebraska and Sanhills Barbecue will have a motif reflective of that region in the state. Lincoln’s own Capitol district will be represented with the Capitol Grill, which will be highlighted with limestone tiles and graphics designed to replicate the names of Nebraska counties, which are chiseled in the actual Capitol just blocks from the new arena.

SAVOR’s menu design complements the detail of the physical locations by ensuring the highest-quality locally based products are featured in all outlets in the arena. As one might expect in Nebraska, Nebraska beef will be featured within many of the concession areas, beginning with the Capitol Grill concession location where hand-packed seasoned Nebraska beef burgers will be cooked to perfection, served on a warm split top broche Rotellia bakery bun finished with SAVOR’s signature “Over the Top” condiment bar. “Our commitment to the city of Lincoln, like all of our clients, is to ensure all the details matter,” Beard says.

Franchising Best Practices
Providing an individualized experience to each city it serves is ingrained in SAVOR’s history. The division traces its origins to 1983, when SMG was approached by San Francisco to establish an in-house catering operation at the Moscone Convention Center, which it manages. The operation expanded to other markets when other cities made similar requests. SMG President and CEO Wes Westley had the vision of combining management and food well before the industry recognized that would have such a positive effect.

The SAVOR trade name was established in 2007, when SMG Facilities was sold by longtime owners Hyatt Hotels and Aramark to American Capital. With new ownership, SAVOR began to compete for non-managed SMG facility business. SAVOR continues to be successful in adding new non-SMG Facilities business. In 2013, it was awarded the Miami Science Museum and Aquarium located in downtown Miami as well as minor league baseball and performing arts facilities.