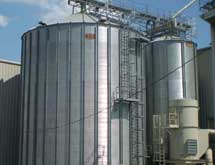 A major disaster like a fire can be enough to close many businesses down for good. For Snavely’s Mill Inc., a fire that destroyed its operations in 1985 was anything but the end for the company.

“We burned to the ground,” says Doug Snavely, who co-owns the flour milling and processing company with his father Jerry and brothers Dan and David. “In hindsight, it’s probably the best thing that ever happened to us, but it didn’t seem like it at the time.”

Before the fire, the company’s main mill in Lititz, Pa., used much of the same equipment and methods it had since its founding in 1875, and served a customer base of mainly retail and small bakery customers. Since the fire, the Snavely family has modernized and greatly expanded its operations.

“We make more flour in six hours now than we did in a whole year back then,” Doug Snavely says. Snavely credits the company’s growth both to its increased capacity as well as word of mouth and the growth of many of the customers it serves.

Today, Snavely’s Mill is capable of producing 14,000 100-pound bags of flour a day in its Lititz mill and a second facility in Mill Hall, Pa. Operations in Lititz recently added a new mill capable of producing 3,500 100-pound bags in addition to its existing facility. The company also recently increased its storage capacity in Lititz, and that location is now able to store up to 420,000 bushels of wheat.

In addition to processing raw wheat and rye into flour, the company also packages and ships 28 trailer loads of flour a day. While milling operations are almost entirely automated, employees are on hand in the mills for packaging and quality control.

Product quality is stressed. “Our name is on the bag, so we want to make sure it’s a good, quality product,” Snavely says.

The company routinely earns a rating of “superior” during inspections conducted by the American Institute of Baking, he adds.

Snavely’s Mill customers include large bakeries and others in the food industry, as well as bakery distributors. The company distributes throughout the eastern United States, “from Connecticut to Georgia to Ohio,” Snavely says. Snavely’s flour is used in cakes and pastries as well as snack items.

The use of Snavely’s flour in snacks has in part helped it to grow business in recent years amid the U.S. recession. “In food service, people are still eating the same amount, just in different places,” Snavely says. “We’ve found that people eat more snacks during a recession.”

The company expects to see continued growth over the next few years as a result of the use of its flour products in this sector, he adds.

Doug Snavely and his brothers represent the fifth generation of the Snavely family in the flour milling business. All three have been involved with the company for most of their lives.

A family atmosphere permeates the entire company, which has helped retain loyal employees. Several Snavely’s Mill employees have worked with the company for more than 20 years, Snavely says.

“We like to keep things structured but not too stringent. We make it a fun place to work,” he adds. The Snavely family and its employees are active in their local community, volunteering and supporting various charities including the Make-A-Wish Foundation, local hospices and the 4-H Club.

Key staff members who help the company’s operations run smoothly include General Manager Sherry Hibshman, who carries out company policies and supervises other managers; Food Scientist Brandy Kendig, who tests flour to make sure it conforms to government regulations; and Mike Gingrich, who is in charge of the milling operations.

Also important to Snavely’s Mill is its delivery drivers, who Doug Snavely says help distinguish the company through their level of service. “Our on-time record helps us stand out,” he adds. “Our drivers are our face, and who our customers see everyday.”