Southern Produce Distributors celebrates 75 years of being a trusted leader and innovator in the sweet potato industry.

Southern Produce Distributors is deeply rooted in the sweet potato industry. Family owned and operated since 1942, the company is focused on maintaining its 75 years of tradition while leading the industry in innovation. “We have a large footprint in the industry and a family legacy of having the highest integrity, ethics and honesty,” owner President Kelley Precythe says. “We treat our growers fairly and we have a relentless commitment to provide the world with the highest-quality sweet potatoes.” 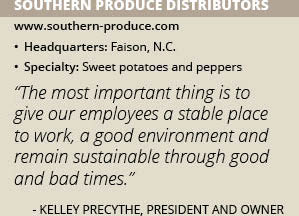 The Faison, N.C.-based company was founded by Precythe’s grandfather, Harold S. Precythe, when he established the first fresh produce rail shipping market in eastern North Carolina. His goal was to provide cities in the Northeast, Midwest and Mid-Atlantic with farm-fresh produce from North Carolina’s rich farming district.

“My grandfather passed in 1984 and my father, Stewart Precythe, ran the company for the next 40 years until he passed in April of this last year,” Precythe says. “His legacy is one of honesty, integrity, hard work, loyalty, and he was a man of his word. He did what he said he was going to do every time. He was a great leader. We always knew he was there. He was the mastermind; the man who stayed up at night building his vision for what he wanted to happen at Southern Produce and in the sweet potato industry, which he took to a global level.”

In addition, the company has a bell pepper operation that processes millions of pounds per year throughout the facility. Southern Produce also operates a Summer Vegetable Program, which includes eggplant, green and yellow squash, as well as a diverse offering of winter squash varieties.

Quality People
Southern Produce’s employees are its biggest differentiator, Precythe says. “We have a young and progressive team,” he adds. “We have 600,000 square feet of refrigerated space that hold three to four million bushels of sweet potatoes. I have an employee who spends every night between 12 and 6 a.m. walking through the sweet potato houses with a flashlight. Even though the facility is computer monitored, he physically monitors the bins and corners where the computers can’t monitor. My competitors don’t do that. It’s all about going the extra mile.”

The company employs 200 people full-time and up to 1,000 people during harvest season. Precythe became the president and owner of Southern Produce this year after his father died. Although the transition was not smooth, Precythe says it was made easier by the positive culture and camaraderie at the company. “I’ve been groomed and trained for this my whole life by the best,” he adds. “My father was known as an innovator and leader trusted by many in the industry. When he spoke, people listened and I was with him every step of the way.”

Southern Produce prides itself on a young, aggressive team that will carry on the family tradition with the highest integrity. “We are proud of what we do and work hard day and night,” Precythe emphasizes. “None of it would be possible without our employees who make up the company. We are one of the biggest if not the biggest grower, packer and shipper of sweet potatoes, but we don’t care about the numbers. The most important thing is to give our employees a stable place to work, a good environment and remain sustainable through good and bad times.”

Innovative and Dedicated
Southern Produce’s export business has earned long-term relationships with loyal customers, as well as a strong dedication to take food safety to the next level. “The United States is actually a little behind the eight-ball compared to the United Kingdom and other parts of Europe,” Precythe says. “It’s an investment we make to stay on top of all the certifications we need to do business with anyone in every quarter of the world.”

The company in October finished putting in an additional eight-lane packaging line for its sweet potato operation. “We were struggling to keep up with orders and running a night shift on one packing line,” Precythe explains. “We added a second packing line that eliminates the night shift and allows us to run both lines each day. This will increase our production by 30 to 40 percent.”

Moving forward, Southern Produce is working to implement 100 percent biodegradable trays for retailers next year. Director of Marketing Brooke Britt will be rebranding all of Southern Produce’s packaging to emphasize the company’s story. “That’s what differentiates us mainly from anyone in the industry is the story we have to tell,” Precythe says. “We have 75 years in business and have been sustainable through a lot of hard times. We have been family owned and operated since 1942 and are trying to maintain tradition as a company and lead with innovation.”