Sprecher Brewing Co.’s innovative and unique product line enables it to stand out in the crowded craft brewing industry.

At the time of its founding in 1985, Sprecher Brewing Co. was one of fewer than 50 microbreweries nationwide. Although the last 30 years has seen it gain an immense amount of competition in the craft beer world, Sprecher’s focus on quality and its diversification into other beverage types helps it stand out from the pack.

“There are well over 4,500 craft breweries nationwide now, but there are still not a lot of dark lagers out there, which is still what we’re known best for on the beer end,” President Jeff Hamilton says. “Today, we’ve probably also become just as known for our (non-alcoholic) root beer as our beers. Many in the beverage industry predict there will be a renaissance in craft sodas, and that’s a space we’re very well positioned in.”

The company’s craft beers include the Black Bavarian dark lager, Hefe Weiss wheat ale, Special Amber, a Belgian Triple and an IPA. In addition to these varieties, which it brews year-round, Sprecher also brews seasonal and limited-release beers. Sprecher’s alcoholic products are distributed in 28 states. “Our products are pretty dynamic. For the first 15 to 20 years of our existence, our drafts were pretty stable, and we made the same eight products with some special runs,” Hamilton says. “But with increased competition and changing expectations from bars, we’re coming out with special beers much more frequently.” 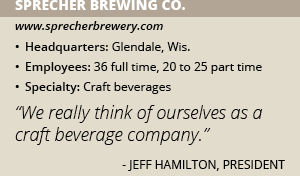 The majority of the company’s specialty products are produced for draft only and available regionally. One of Sprecher’s newest beers, a grapefruit radler, was initially introduced as a kegged draft-only product before being sold in cans last December. “(The radler) was been very well-received; we’re getting a tremendous amount of business around that, and plan to take it into more places including golf courses or beaches,” he adds.

First created as a beverage option for children and families visiting its original brewery in downtown Milwaukee, Wis., Sprecher Root Beer is now the company’s top-selling product, with distribution in more than 40 states. In addition to root beer, the company also brews eight sodas including a cream soda and a ginger ale. Several of Sprecher’s sodas are brewed using Wisconsin honey in one of two kettles. The company is building a new kettle to increase its soda capacity to meet customer demand for the products, Hamilton says.

The company bottles, kegs and boxes its sodas and beers in Glendale. A new-to-the-company bottling line was installed in 2015, greatly increasing its capacity. “We’ve pretty much been expanding the brewery every year I’ve been here; it’s a continuous process,” adds Hamilton, who joined the company 11 years ago.

Unique Experiences
Sprecher’s Black Bavarian dark lager was the first beer brewed by company founder Randal Sprecher after a trip to Germany in the late 1960s that opened his eyes to a style of beer that was mostly unseen in the United States at the time. After graduating with a degree in fermentation science from the University of California Davis, Sprecher worked as a former brewing supervisor for Pabst Brewing Co. in Milwaukee before breaking out on his own. The Sprecher brewery, initially located in Milwaukee, was the first new brewery to open in Wisconsin since the end of Prohibition.

Since its opening, the company has become renowned in the craft beer world for the quality of its products, which has earned it a number of awards including the Beer World Cup for Black Bavarian. Most recently, its Hefe Weiss and Dopple Bock won gold medals at the 2015 Los Angeles International Commercial Beer Competition, with its Stout earning a bronze medal and its Scotch Ale an honorable mention.

The company also prides itself on being first to the market with many of its products. “We’re very innovative,” Hamilton says. “We were the first in the country to come out with an alcoholic root beer, after developing it for many years. Now there are more than a dozen alcoholic root beers out there; every time I turn around someone is jumping into that business.”

Sprecher’s hard root beer, introduced in 2013, was followed the next year by a hard ginger beer. An apple pie-flavored alcoholic beverage followed in 2015. “There’s a lot of competition in the hard beverage area, which keeps things interesting, and keeps guys like me on my toes,” he adds.

In addition to quality and innovation, Sprecher also distinguishes itself by emphasizing the ways its beers pair with cheese or other foods. The company’s brewery regularly hosts reserve tasting tours, during which guests receive beer samples paired with Wisconsin-made artisan cheeses. “We give our customers a unique palette experience,” Hamilton says.

On The Road
Sprecher’s use of Wisconsin cheeses during its tastings and locally grown barley and other ingredients in its products is just one way it supports its local community. The company donates its sodas to a long list of charity events and organizations, including the Boy and Girl Scouts of America. Products are also donated to charity golf events.

The company participates in Milwaukee County’s annual Traveling Beer Garden program, taking its sodas and beers to 16 parks every summer. The concept is an adaptation of a pre-Prohibition concept, when more than 12 outdoor beer gardens were regular summer staples throughout the county and city of Milwaukee. Sprecher uses four repurposed fire trucks for the events, with each truck retrofitted to house barrels and taps. One of the trucks owned by the company was donated by musician Bruce Springsteen to the Asbury Park, N.J., fire department and served that city before it was retired. “These fire trucks are the greatest ambassadors we could have,” Hamilton says. In addition to the fire trucks, the company also uses refurbished ambulances as food trucks.

The Traveling Beer Garden events exceeded $250,000 in revenue in 2014 and $700,000 last year, with proceeds benefiting the county park system. Sprecher directly donated $32,000 for improvements to 16 parks last year, he adds.

Future Opportunities
The company continues to add to its beverage portfolio. Sprecher last year started producing cider, a move that made the company a winery in addition to a brewery. The company also buys and packages bulk wines.

Sprecher stepped into the craft spirits world recently when it partnered with a local distillery to turn a batch of its Piper Scotch Ale into a craft scotch. The next few years will also likely see an increased national presence for its soda products, as well as an expansion of Sprecher Pub and Restaurant, a licensed chain that now includes four locations. “We really think of ourselves as a craft beverage company,” Hamilton says. “We’re always innovating and taking advantage of any opportunity and resource we have.”