Back to Profile Gallery > St. Lucia Distillers Group of Cos. 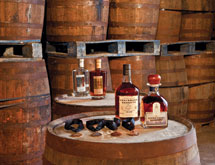 St. Lucia Distillers Group of Cos.

St. Lucia Distillers Group of Cos. might be modestly sized compared to some alcohol beverage companies, but the firm sets itself apart with its quality products and packaging, Sales and Marketing Director Michael Speakman says. “We’ve had to [appeal to] the top end of the market,” he states.

Based in Roseau Valley, St. Lucia, the firm specializes in spiced rums, liqueurs and other alcoholic beverages. Speakman says the firm was formed from the merger of the Barnard and Geest family distilleries in 1972.

In 1992, the Barnard family purchased the Geest family’s share of the business, but sold 25 percent of it five years later to Angostura Ltd. Thirteen years later, the family sold its remaining shares to CLICO Holdings Barbados Ltd., with third-generation rum producer Laurie Barnard staying on as the firm’s managing director.

Today, Speakman says, St. Lucia Distillers produces 1 million liters of pure alcohol annually. Much of these products are set aside to age, but the company annually sells approximately 200,000 cases of products.

Recently, St. Lucia Distillers issued its first edition of a 1931 product, which commemorated 80 years of making rum on the island.

Company Commitment
Speakman joined St. Lucia Distillers in 1998. “I’m coming on 15 years [of working here],” he says, noting that the firm has assembled a strong team. “Everyone has their job to do.”

These include Laurie Bernard, who is “really the main driver of this company,” Speakman says. “He has an incredible vision for rum.

“He has absolutely welded the concept of producing extremely high-quality, well-made rum to his drive,” Speakman says. “His energy has meant we can achieve [our goals].”

Speakman also praises the company’s distillers. “They work extremely hard,” he says, noting that their work has led to many recognitions, including the 2010 World Class Distillery award at the World Spirits Awards.

“I am immensely proud of the products that they produce, and they can look justifiably pleased when we win all of these medals,” he says. “It increases their commitment to the company and the making of great rum.”

Ready for a Turnaround
Like many, St. Lucia Distillers is still coping with the impacts of the economic recession. “We have seen a bit of a slowdown,” Speakman admits, adding that this has led to the firm splitting up its market.

In the Caribbean, the company is finding more customers want to save money and buy its lower-end products. However, its higher-end products are doing well outside of the islands. “Certainly, I think everyone hopes in the next few years [that] that things will turn around,” he says.

But he asserts that the rum business is a good place to be. “Matters certainly have helped us,” he says. “There is an enormous interest in markets such as the United Kingdom for good rum.

“People are growing their market shares for the smaller distilleries,” he continues. “We’re quite happy with [the way that] the market is expanding.”

Additionally, despite the market slowdown, St. Lucia Distilleries has 90 percent of the island’s rum market. But, it wants to expand its international reach, Speakman asserts.

“We have a vision for the next five to 10 years to bring it more international,” he says, noting that the company wants to reach out further into the United States. “We’re there already with [an import] company called Team Spirits.”

He adds that St. Lucia Distilleries’ products are also sold in Canada, Australia and the majority of the European countries.

Currently, “[We are] ensuring that our rums can be [consumed] at the best hotels and restaurants in the major metropolitan areas in both America and Europe,” he says.

St. Lucia Distillers Group of Cos.