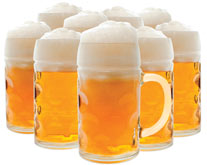 Founded in 1933, Standard Distributing Company Inc. is the oldest and largest all-beer distributor in Delaware. The company touts its roots as a family business and focus on fairness and communication.

“We keep our customers happy and train our people on our values,” Vice President Steve Tigani says.

Standard Distributing is a full-service wholesale beer distributor that is owned and operated by the third and fourth generations of the Tigani family. It represents many nationally known brewers and importers of beer and non-alcoholic beverages, and it serves more than 1,000 licensees. The company has two temperature-controlled warehouses and offices. The 200,000-square-foot New Castle location serves Wilmington, New Castle County and surrounding areas. Dover’s 60,000-square-foot warehouse serves Sussex and Kent counties.

Standard Distributing has achieved a number of milestones. Founder J. V. Tigani was issued the first license to distribute beer in Delaware in 1933. In the 1940s, the company acquired the rights to represent Miller Brewing and Guinness. In the 1980s, it introduced Coors products to Delaware. In 1994, Standard Distributing acquired distribution rights to D. G. Yuengling & Son Brewery products. In 2011, the company became the first corporation in New Castle to install solar paneling.

Pursuing Growth
Standard Distributing is always looking to grow distribution, sales, quality and awareness by striving to provide the best people, programs and service. It has separate teams for on-premise and off-premise customers. The company counts craft beer experts, experienced merchandisers, graphic designers and a draft beer department as parts of its arsenal.

Standard Distributing tries to have a strong understanding of suppliers’ plans. When a new brand is launched, it takes the ideas and focus of the suppliers and puts them into action to maximize growth potential.

“We try to find out what our suppliers will be doing so we can get ahead of the game,” Tigani says. “We can take the best practices we’ve learned from working with larger companies and share them with smaller players.”

Relationships with smaller breweries have grown because of consumers interest in craft beer, especially in the 21- to 31-year-old range.

“They aren’t loyal; they are trying everything and interested in shopping,” Tigani says. “We have to give the stores the selection they need.”

Standard Distributing serves a Delaware market that isn’t driven by large chain stores. It works with independent liquor stores; each is different. The company is constantly working with its retail partners to try and get more space for beer. Tigani says this can be a challenge because of the wine and spirits categories.

“Our focus has been on creating bigger beer spaces,” he says. “Our salespeople have to show the retailers the value of our products.”

Improvement Efforts
Standard Distributing is regularly looking for ways to improve its operations. On the sales side, the company has invested in laptops for salespeople so it can be more efficient and use less paper.

In its warehouses, Standard Distributing invested in inventory control systems. These investments help the company get loads together as quickly as possible.

Another consideration is its fleet of 45 trucks, all of which feature decals or wraps. Although nothing is imminent, Standard Distributing is keeping a watchful eye on developments concerning alternative fuel sources.

Over the next few years, Standard Distributing will try to boost the premium light beer category, as Miller Coors represents 80 percent of its business. Helping budget beers regain volume is another priority.

“If we can help those categories perform and manage our SKUs well, we’ll be well on our way to success,” Tigani says.