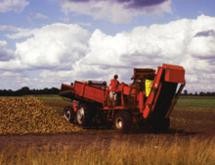 When Keith Masser started working for his family’s potato business more than 30 years ago, he was mainly concerned with the basics of growing and shipping spuds. As chairman and owner of Sterman Masser Inc. (SMI) today, Masser has much more on his plate. He balances the day-to-day operations of the company’s massive farm setup with marketing, expansion and other duties. This year marks the company’s 40th anniversary.

Masser’s family has been farming potatoes for eight generations. The roots of SMI began taking hold in the Sacramento, Pa., area in 1959, when his parents Sterman and Geraldine rented land owned by Sterman Masser’s uncle Ralph. They purchased the farm in 1967 and formed SMI in 1970.

While Keith Masser was raised in a farming family, he initially took a different path, earning an engineering degree from Penn State University and working as a project engineer for Proctor & Gamble. His outlook changed when he and his wife Helen started a family.

“We wanted our kids to have the benefit of knowing their extended family, getting raised up on a farm, and having the work ethic associated with that,” Masser says. Keith and Helen Masser joined the business in 1976 and bought it in 1984.

SMI’s largest expansion became a reality in 2000, when the company added 1 million square feet of cooler and storage space and a state-of-the-art washing, grading and packing facility. The company’s new storage facility was built in 2001. “From 1976 to now, we’ve basically doubled our business every five years,” Masser says. “There’s a lot of people who eat potatoes on the East Coast; almost one-third of the total potato consumption in the U.S. is within four hours (of drive time) of our facility, so it’s basically a matter of location, location, location.”

SMI’s potatoes can be found across its region. “We’re in every (grocery) chain in the East; we’re penetrated in most retail markets,” he adds.

The company farms 4,600 acres and has the ability to pack and distribute more than 70 million pounds of potatoes each year. SMI offers all varieties of potatoes including Blue Denim, Country Style Red, Russet Brand and Golden Brand. SMI also buys and distributes potatoes grown on other farms, Masser says. SMI has carried a “superior” rating for food safety from the American Institute of Baking since 2000, and is certified by the Safe Quality Food Institute.

The company reports record sales in the first quarter of 2010, despite the national recession. “My family has always been resilient, even through the Great Depression in the 1930s,” Masser says. “People going through hard times go back to staples, and potatoes are one; they’re economical, you can get a lot of pounds to eat at a low cost, and people are eating at home more.”

Masser says his company is adapting to market consolidation and a changing customer base in part by joining forces with other potato growers to better market their product. Masser and four other companies in other parts of the United States – including Ohio, Maine and Washington – recently developed a marketing company, Fresh Solutions Network Marketing LLC.

The companies within the network all assist the others with supply. “This puts a 30,000-acre supply base in our network that we can rely on to ensure our customers never run out of potatoes,” Masser says.

One of SMI’s newest products is what they call “Steamables” – microwavable whole potatoes that are ready to eat in eight minutes. “I worked with the U.S. Potato Promotion Board, and they did research that said people would eat more potatoes if they were more convenient,” he says. “Steamables are just gaining traction; we’re trying to promote and work with our retailers to educate people about them.”

The company strives to reduce the risks posed by pesticide use by scouting the areas where it is to be used and applying it only where necessary, according to the company.

Other control measures include washing, cooling the drying potatoes before packaging, as opposed to cooling them after packaging. This improves shelf life, according to the company. SMI promotes a clean uniform size and packs only low-gravity potato varieties.

Farming is done on a four-year rotation of potatoes, cover-crop rye, no-till corn, no-till wheat, and cover-crop sorghum Sudan grass to reduce soil erosion and disease. Crops are grown several miles away from land that is out of rotation in order to control disease, according to the company.

Potato harvesters use air separation to provide more bruise-free potatoes, and potatoes are graded three times before they are packaged.

Masser expects to expand the membership of Fresh Solutions Network Marketing Inc. in the coming months. The partnership recently built a packing facility in southwest Michigan.

In addition, Masser says he plans to add solar energy capacity to his main farm facility. Ultimately, he hopes to have 40 percent of his plant’s energy supplied through solar.

Keystone was recently featured in an episode of “Modern Marvels” on The History Channel focused on the history of the potato.

SMI employees are involved in local charities including the American Cancer Society Relay For Life. Masser serves on a local township board, as well as in local and national organizations such as the National Potato Council, the United States Potato Board and the Pennsylvania Potato Research Advisory Board. Since 1990, he has served as the president of the Pennsylvania Co-operative Potato Growers.