Back to Profile Gallery > Stern Produce 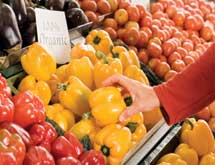 When Stern Produce began in 1917, Arizona’s population stood somewhere between 200,000 to 330,000 people. Back then, Stern Produce was a local Phoenix farm. Over the years, Arizona grew slowly yet steadily until it took a sharp increase in the 1980s. In the same way, Stern Produce has also seen organic and stimulated growth, as the once local farm has transitioned into a statewide wholesale distributor of produce, dairy and meat products.

“We’ve had some pretty steady growth ever since we started in the distribution market,” says Billy Stern, the fourth-generation owner of Stern Produce. His great-grandfather began the farm and sold his products in downtown Phoenix. When he closed the farm, Stern’s grandfather opened a produce wholesale store, selling and distributing fruits and vegetables grown by local farmers. Since then, the company has faithfully served the produce needs of resorts, hotels, restaurants, schools and other institutions in Arizona.

“We’ve constantly grown each year, just as our city has grown,” Stern says. “Phoenix has exploded over the last 20 years, so we’ve been making sure we grow with it and stay on top of our customer needs.”

To foster this growth, Stern Produce has implemented a number of changes all aimed at offering better service and value to its customers, and not just in Phoenix.

The company’s 46,000-square-foot facility in Phoenix is its largest building. Sixteen years ago, the company moved out of its previous building and built the fully refrigerated Phoenix location, giving it an advantage on local competitors. “Those days, most of our competitors were operating in facilities that were more like warehouses with coolers put in it,” Stern says. “Their facilities weren’t specifically built for the market’s needs, so our investment led to a lot of success.”

Stern Produce also has an 8,000-square-foot facility in Tucson to cover the southern Arizona market and a 6,000-square-foot facility in Flagstaff serving the northern Arizona market. All three facilities have the same functions that for a long time only included receiving, refrigerating, sorting and distributing produce. That changed about 12 years ago.

When Shamrock Farms bought Jackson Dairy Farm, Arizona consumers were limited to three dairy options. So Stern Produce decided to add a full line of produce. “We wanted to give them some other avenue in terms of the dairy market,” Stern says. “It’s been a really nice fit for us. It gives our customers the ability to purchase dairy products on a daily basis as well as produce.”

Bringing Stern Produce closer to a one-stop shop is its addition of a meat distribution division. The company began delivering products for a meat wholesaler about 2 miles away from its Phoenix location. Stern eventually bought the company and now processes, cuts and grinds different meat products.

Stern says adding more perishables to the product list is always a plus for customers, but ensuring it’s a plus for the company takes more planning. “We learned just from bringing on dairy from produce that it was whole different animal,” he says. “How it was sold; how it was marketed; how the consumers wanted to purchase it – there is a lot of research. So we didn’t jump into the market and say, ‘Hey, we sell meat now.’ We try to first build it into our system and grow it slowly to make sure it’s working well and we’re not over expanding ourselves.”

Another way Stern adds value to its customers is through Pro*Act which is a group of 53 independent food distributors who operate by consolidating produce purchases from top-tier growers around the country. Through this, companies like Stern Produce are able to compete on the same levels of nationwide distributors. “It leverages our buying power to get better pricing for our customers,” Stern says. “It also ensures we don’t get cut from products when there are shorts in the market.”

Stern Produce makes sure it’s not cut from any market. Through Harvest Sensations, the company’s seasonal produce supplier, Stern Produce is able to offer products like hand-peeled and cut vegetables, herbs, flowers and micro-greens. It also has developed relationships with local farmers to keep up with the popular demand of locally grown and organic perishables.

“We took it upon ourselves to visit with these local growers and go over guidelines on how they’re growing and making sure they are meeting the standards for food safety,” Stern says.

In the local market, Stern says communication is important between Stern Produce and the farmers because the seasons change so quickly in Arizona. In other parts of the country, a farmer may have a product for three months; an Arizona farmer may only have it for six weeks.

In the end, whether it’s visiting with local farmers, adding new products or teaming with other distributors Stern says each function is meant to do one thing. “We make sure that our customers are taken care of at all times,” Stern says. “We constantly reevaluate our products and applications used to make sure we’re maximizing our customer’s profit of what we sell them.”