Back to Profile Gallery > Stevco 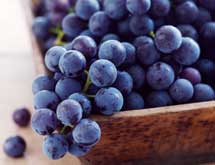 Ever since the company was founded by Steven Gilfenbain in 1974, Stevco has been focused on one thing and one thing only: Growing and selling the highest-quality table grapes found anywhere in the world. And, as President Dave Clyde explains, that dedication has helped the company grow into one of the largest and most successful grape providers in the United States.

Based in Delano, Calif., Stevco distributes and exports grapes from some of the best grape-growing regions of the world. Clyde says the company runs nearly 4.4 million boxes of grapes each year out of California’s San Joaquin Valley, along with another 500,000 boxes annually from the Coachella Valley.

In addition, Stevco handles approximately 1.7 million boxes of grapes each year from Mexico. It’s because of this variety that Stevco can operate beginning-to-end during the grape-growing season, which starts in May and ends in mid-July.

“We’re one of the only companies that handle grapes from the beginning of the grape deal through the end of the deal,” Clyde says.

Because of the sheer volume it deals in, Stevco has the ability to serve some of the biggest clients in the business. Clyde says the company specializes in supplying to chain stores such as Walmart, Costco and Kroger’s, as well as wholesalers in most of the major U.S. markets and worldwide. “We do business with them all,” Clyde says.

Stevco didn’t become one of the biggest names in grapes by accident, and Clyde explains that the company’s devotion to quality has been one of the key factors in driving its success over the years. This dedication, along with some emerging trends around the world, gives Stevco reason to be excited about the future and all of the potential growth it could bring.

Best Quality
Stevco’s success begins and ends with the grapes, and Clyde says the company deals with some of the best vineyards in the world. Clyde explains that many of the vineyards it works with are relatively young, and therefore they have the capability and capacity to grow new varieties of grapes that are in greater demand.

“We pride ourselves on growing the best and giving the best quality of grapes in the industry,” Clyde says. “We give [customers] the best of those varieties, and we’re known throughout the industry for our high quality.”

Clyde explains that Stevco also pays close attention to food safety, adhering to top-of-the-industry practices when it comes to ensuring the grapes are properly handled. “We all have families, we all want our families as well as every other customer we have to be safe, so we take food safety very seriously,” Clyde says.

Good Times Ahead
The biggest challenges Stevco faces today are the same that are affecting the grape industry in California as a whole, Clyde says.

Water shortages are always something growers in California have to be concerned about, as well as the labor pool and the effect immigration policies have on it. “Those are industrywide concerns,” he says.

However, Clyde says that despite these potential stumbling blocks, Stevco is optimistic about the future because of a number of trends that have very positive implications for the company as well as the entire grape industry. For example, Clyde points to the rise of the Internet as something that has driven more people to healthier eating. “I think with the Internet, you can now get on and look up everything,” he says.

As more and more people try to change their eating habits to include more fresh fruit, grapes are a popular choice because of their portability and flavor, and overseas markets are beginning to take notice of North American grapes as a good option. Clyde says Stevco has started exporting to markets such as India and the Pacific Rim, a move that has boosted the company’s business.

“We’re exporting more than we ever have,” he explains. “There’s more demand for California grapes that we’ve ever had before. It’s a growth spurt worldwide.”

With all of these factors coming into play for Stevco, Clyde says the company is excited about the future. Clyde says new varieties of grapes are being developed all the time, and there are still multiple markets around the world where the company has not made its entrance yet. That’s something Clyde says will be changing very soon.