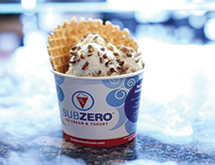 Sub Zero Ice Cream & Yogurt owner Jerry Hancock figured out the secret to success is customization, and in 2004 he put his degree in chemistry to use by realizing liquid nitrogen can instantly freeze a substance, which would allow endless ice cream and yogurt combinations.

Nitrogen is one of 118 known elements and because it evaporates at low temperatures, it typically exists as a gas and in order for it to remain in a liquid state it must be kept at extremely cold temperatures. Liquid nitrogen boils at -321 F and freezes anything it touches, making this molecular gastronomy ideal for transforming milk and sugar instantly into ice cream. “We asked customers what they wanted and they all said they wanted ice cream,” Hancock says. “We knew we were going to have to be a destination and we were looking for something that no one else had done before.”

Hancock and his wife, Naomi, will celebrate the 10th anniversary of Sub Zero next year and he reflects on the long road they traveled to get here. “We spent four years just testing this concept store and my wife and I did it all out-of-pocket,” Hancock says. “I didn’t know if it was going to work, but I said, ‘Let’s give it a shot.” At that point in the early 2000s, the Hancocks were struggling to keep their New York Burrito restaurant afloat and knew they needed to make a change. “It wasn’t that we wanted to get into sweets or ice cream, it was the fact that we needed to add a product that would add revenue to our current store. After the testing proved successful, the Provo, Utah-based company took off and now has 30 locations worldwide.

Endless Options
A customer’s experience at Sub Zero can be anything they want it to be. When Hancock asked customers what they looked for when going out for ice cream, a majority said they liked the Cold Stone Creamery franchise because it gave options. “The only answer I could come up with on how to make the Cold Stone concept more custom was the instant liquid nitrogen freeze,” he explains. “We didn’t want to knock them off, but make it better.”

Sub Zero stores’ customers start by choosing whether they want premium, low fat, non-dairy, soy, custard or yogurt. Then the creativity and fun begins by choosing any of its 45 flavors to combine, such as mint and lime, white chocolate and hot cinnamon, Pepsi or cake batter and bubblegum. From there, customers can choose mix-ins, such as candy, nuts and chunks of baked goods. “This is one difficulty we have is getting people to understand [that] they can have a lot of creativity,” Hancock says. “Because of the Food Network shows, people want to experience new things and do, vicariously through the TV, but we are trying to give them the opportunity to experience those same flavor combinations.” After all those options, customers still have one more decision to make before they enjoy: How frozen do they want their ice cream? The liquid nitrogen allows Sub Zero to customize from soft-serve to rock hard, Hancock adds.

A patent is pending on Sub Zero’s method of freezing milk and sugar into ice cream and the proprietary process is taught to each employee in every franchise. Sub Zero will add five new locations in the United States this year and recently opened a location in Abu Dhabi.

Treats and Education
The Hancocks have a passion for education and use Sub Zero’s liquid nitrogen method as a way to teach children about chemistry and market the store at the end of their presentation. Liquid nitrogen is brought into schools to become an augmented teaching experience for grade school through high school students. “Because we are using nitrogen, we want to promote education and the school’s whole curriculum,” Hancock explains.

The presentation is educational as it explains how liquid nitrogen can be harnessed to freeze fresh ingredients into ice cream. Topics discussed include elemental properties of nitrogen, gas laws and the application of science to food. Once Sub Zero is finished with its presentation, the students receive a sweet treat. “I believe we are just as much an education company as we are an ice cream company,” Hancock says.