When Jerry Hancock got into the food business he started with a burrito franchise in Utah. It made sense at the time. He liked burritos and the franchise did not require a lot of upfront funding. But the restaurant wasn’t making much money and Hancock realized it needed another product to increase revenue.

Ice cream was an obvious choice, but experts warned Hancock that he needed to make its frozen desserts distinct in the market. “So we had to figure out what’s different,” Hancock says of developing the idea that would become Sub Zero Ice Cream. “We came up with what we have today.”

What Hancock has today is one of the most unique approaches to selling ice cream in the country. When most ice cream shops talk about letting customers customize their scoop, they’re referring to small selection of toppings. There might be 31 flavors – or more – but people can’t just create a banana fudge rocky road if it’s not in the freezer that day. 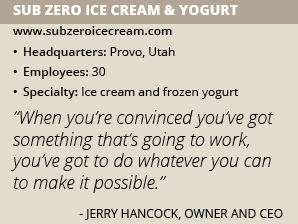 At Sub Zero, customers can customize their ice cream from the ground up. The ice cream isn’t even frozen until the customer completes the order, which allows a patron to select flavors and mix-ins specific to their bowl. Those ingredients are blended together then blasted with liquid nitrogen, taking about 15 seconds to freeze.

Because the process happens so fast, freezing the cream with liquid nitrogen creates smaller water crystals than traditional methods and less air whip is needed, resulting in a richer product. Guests can even request a harder or softer pack to suit their tastes. “The real big thing is you can customize it entirely,” Hancock says.

Refining Process
Sub Zero has the process down now, but it took several years of testing and refinement – not to mention finding vendors that could supply the liquid nitrogen. The first Sub Zero opened within the burrito restaurant in 2004, but it took a large learning curve before the second location, and first stand-alone, could open in 2008.

Early on, Hancock couldn’t persuade liquid nitrogen suppliers to deliver to him so he handled the supply himself. “We were such a new idea the big companies didn’t want to take the risk of trying it out,” he says. Hancock started by taking 50-liter tanks down to the local nitrogen plant.

Manufacturers wouldn’t sell to him directly so he bought the gas under a third-party name then lugged the tanks back to the burrito restaurant in his car. Passing motorists would honk a warning, worried the trail of vapor coming from the tanks in the backseat was industrial equipment getting ready to burst. Hancock just laughed and waved them off as they sped around him.

“When you’re convinced you’ve got something that’s going to work, you’ve got to do whatever you can to make it possible,” he says.

Hancock eventually purchased a larger Air Force military surplus tank and cut his resupply trips down from daily to every two weeks. A few niche suppliers began delivering to stores, but had to restrict sales after their corporate lawyers found out. It wasn’t until last year that Sub Zero Ice Cream was able to secure a contract with national vendor Air Liquide, a feat that was only possible because of the company’s 10-year record of safely handling liquid nitrogen.

With a national liquid nitrogen supply contract in place, Sub Zero is now better positioned to bring its ice cream experience to a national audience.

Growing Brand
Walking into a Sub Zero location is about more than getting a good bowl of ice cream. It’s an entire experience. Most ice cream shops have a white motif, but Sub Zero brings color and light intensity to its counters to make them a focal point for the guests.

The making of the ice cream is a spectacle all to itself. Employees whisk the ingredients around in a steel bowl before bathing it in liquid nitrogen gas. The gas is then vented out toward the customer, turning them into a participant. “Making that customer experience a show is paramount to what we’re trying to do,” Hancock says.

The company recently opened its fourth corporate store but its strength is in franchising. Hancock describes Sub Zero’s expansion as reaching plateaus. First it opens one store in a market, then two, then five in the state. From there, it reaches out to the next market.

The further it spreads out from Utah the harder it becomes to monitor the stores, so the company regularly takes stock of its operations. “Each level we had to pause and make sure we had everything right,” Hancock says. “That we were getting [right] the construction, the communication that makes things complicated. Then we moved on.”

Today, there are 54 Sub Zero locations, including franchises in China and the United Arab Emirates. The company is on pace to add between 15 and 20 new stores a year. Most of its current locations are found in strip centers, but reductions in counter space are enabling the company to expand its range of footprints to support a wider variety of markets. Stores today range in size from 1,200 square feet up to 1,700 square feet, but Sub Zero will soon introduce a 600- to 700-square-foot model.

In addition to ice cream, stores sell Italian ice, yogurt and custard. Hancock says this allows Sub Zero to stay nimble and capitalize on trends in the market. If customer tastes shift toward custard, many yogurt places will be left behind. But because Sub Zero doesn’t freeze its product until the time of order it can easily accommodate those market changes.

The company is also looking to add products that complement ice cream. At its flagship store in Provo, Utah, Sub Zero is introducing a soda lab that allows guests to customize their beverage. If someone wants a strawberry soda or a coffee-flavored Coca-Cola, Sub Zero can make it.

Solidifying its supplier agreements and refining its process have improved the Sub Zero brand and enabled the company to better market itself. Store sales are on the upswing as customers become familiar with the Sub Zero name and owners better understand their product. “What I think is exciting is we’re getting some very experienced franchisees in the system that are getting better and better,” Hancock says.